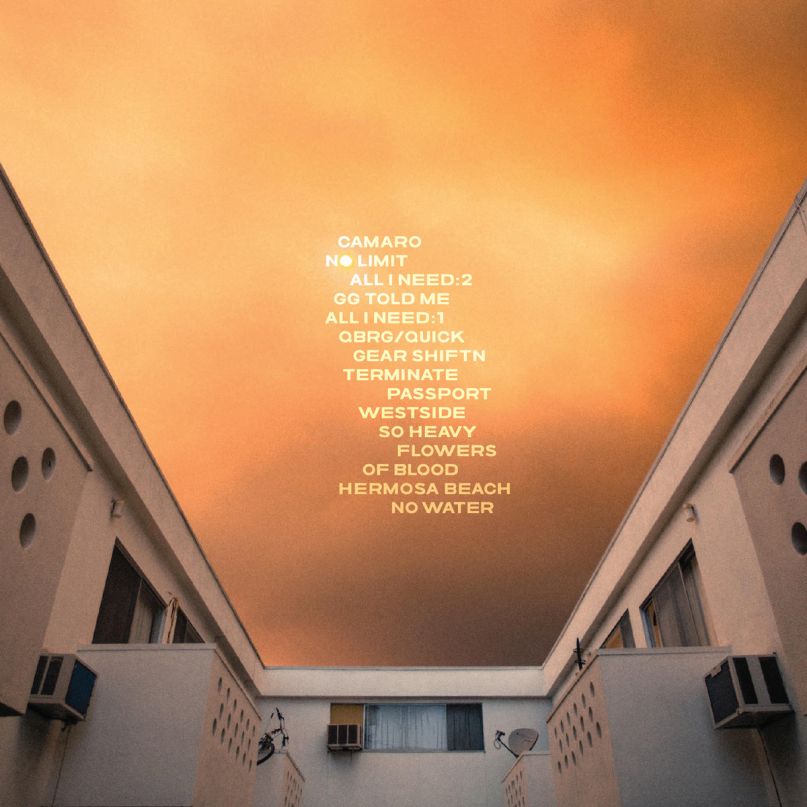 Each member of Air Credits, the Chicago collaboration comprising rapper ShowYouSuck and production duo The Hood Internet, is something of a pop culture addict, giving their music countless idiosyncrasies. Show’s raps memorably consist of goofy and unpredictable pop culture references (an approach not unlike that of Seattle rapper Nacho Picasso), while The Hood Internet are all-around music heads, something that’s been clear since their early days as second-wave mashup kings in the late 2000s, when they were fusing together songs by, say, Lil Wayne and Modest Mouse. Having initially collaborated for 2012’s “Nothing Should Be a Surprise”, a ShowYouSuck-featuring song on The Hood Internet’s FEAT LP, their relationship has evolved, producing not just a new 15-track album called Broadcasted, but a conceptual one at that.

The concept goes something like this: Air Credits exist in a kind of dystopian society in the future, where Trump “never left office” due to advanced cloning technology. It’s a situation that’s laid out clearest in a hook on album closer “No Water”: “We ain’t got no water, plus we pay for air/ How we livin’ here, in the wasteland?” In a separate hook on the same song, Show further defines the economic circumstances: “Air credits don’t come cheap/ Broke boys ain’t breathing like me.” There are smaller details, too, like this from “Passport”: “My PlayStation just got deported, ‘cause it’s foreign/ Everything’s foreign!” It’s debatable whether Broadcasted can be considered a full-on concept album, but there are definitely enough ideas here that it could’ve been, if that had been the goal.

Considering Show’s previously established charms as a lyricist, it might actually be for the best that he didn’t get carried away with the album’s conceptual aspects. His omnivorous appetite for music, movies, and other entertainment still plays a big role in his songwriting. His first line on the album, from opener “Camaro”, is this: “My 31st favorite movie’s The Craft.” The list of pop culture figures mentioned here includes — but is nowhere near limited to — David Bowie, Lemmy, Depeche Mode, Wilson Pickett, Steve Buscemi, GG Allin, and Black Eyed Peas member Taboo. It’s not that it’s impressive for him to merely mention those names; instead, where Show consistently proves to be a standout MC among Chicago’s crowded rap scene(s) is primarily through his humor. “No kid, got a dad bod/ Hall & Oates on my iPod,” he brags on “All I Need Pt 1”, with the same relish of a more materialistic rapper talking about Balmain jeans or whatever

Meanwhile, the production from Hood Internet members ABX and STV SLV tends to be dense, but not overly so, with samples ranging from The Notorious B.I.G.’s “Juicy” on “So Heavy” to Darkside’s “Golden Arrow” on “GG Told Me”. The propulsive, euphoric highlight “All I Need Pt 2” (which actually precedes “All I Need Pt 1” on the tracklist) almost could’ve been a Kanye beat circa The College Dropout or Late Registration, and with its initial release in July, it was the first evidence that Broadcasted could be something special.

While some of the beats are smooth and pared-back, the best ones tend to be loud and booming, as is the case with the blasting horns and burning guitar notes of “No Limit” (which features Minneapolis rapper and Doomtree member Sims) and “Of Blood”. Overall, it’s a collection of beats as kinetic and unpredictable as the verses that Show raps on top of them. Here’s hoping that there will be more Air Credits releases in the future, and that the same future won’t have too much in common with the wasteland that this album depicts.