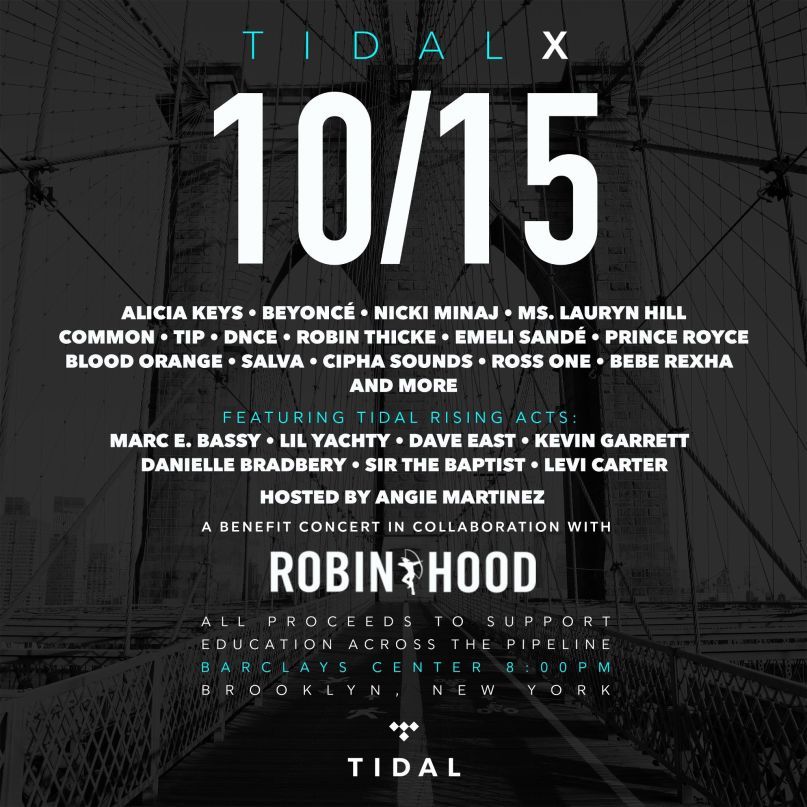 I’m not a TIDAL user. I downloaded the service once to listen to an exclusive album, but when I realized you had to first sign up for a free trial, I decided to just wait until the record went live elsewhere. Still, I can appreciate what the company’s trying to do for artists and its attempts to build a more IRL community than any other streaming service. Case in point: Their second annual TIDAL X benefit concert, held this past Saturday night at Brooklyn’s Barclays Center, contributed to that idea — though, it was also somewhat emblematic of the company’s flaws.

Ostensibly, the show was a star-studded event to support The Robin Hood Foundation’s education initiatives. I actually ended up in an Uber to the venue with the principal of one of the schools that the nonprofit supports, and he told me what a windfall events like this are for them. While it’s great to know there was an actual benefit to this benefit concert, the message was a bit lost during the show itself.

Over the course of four and a half hours, there were a total of five mentions of anything education related, with three of those being video packages. The one time an actual teacher took the stage somehow warped into a product placement for Dodge, but at least the teacher was gifted with a new Dodge Charger. Sprinkled throughout were mentions of other causes like getting out the vote (“And don’t vote for the white man!” Robin Thicke exclaimed) and ending discrimination, presented via the op-ed video Jay Z made for The New York Times.

But most of all, the entire thing felt like a giant advertisement for TIDAL — which, to be fair, it kind of was. I’d bet a majority of the folks in the crowd were’t users of the service (an eavesdropping poll concluded none of the people around me were). One of the video packages that played between sets consisted of fans who’d won or purchased entry through TIDAL saying how great TIDAL is, each ending their excited speech with, “Thank you, TIDAL!” Even the artists continually gave shout-outs to the company for putting on the show, only occasionally and vaguely referring to “the good cause” that was supposedly the base for the whole thing.

The purported message of the night was simply lost in the clutter. And it’s not like there wasn’t plenty of downtime during stage resets where a video could have played or a speaker could have taken center stage to talk up the charity organization. It was a considerably long show, with plenty of filler acts spread out with de-energizing gaps of time between them. Much like the streaming service itself, it seemed like the TIDAL X show came in with a good idea and stumbled its way through the execution.

On the other hand, TIDAL is really about putting the music and artists first, and in that sense, there was plenty of success last night. Despite the dragged-out pacing in the middle of the evening, this was like watching a mini-festival stuffed with top-tier performers. Not everyone got their due, and the complete lack of surprise collaborations or guests was disappointing, especially considering Nicki Minaj and Beyoncé were returning after teaming up for “Feeling Myself” at last year’s show. (And where was Hov?)