The genre filmmaker returns with his latest experiment: In a Valley of Violence 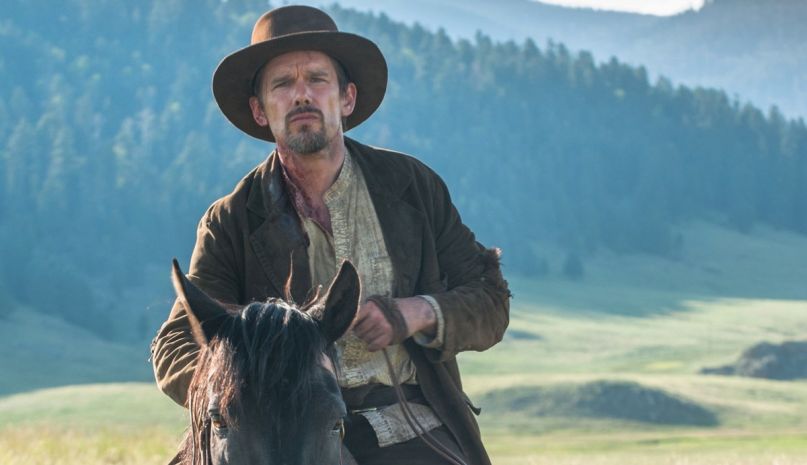 Ti West’s attention turns from our interview to the deep bass rumbling from the nearby theater. We are sitting on the brightly carpeted floor in a corner of the Zach Theater’s lobby in Austin, Texas. It’s another hot afternoon at South by Southwest and West’s latest film, In a Valley of Violence, is playing a mere 10 feet away. Naturally, the director is a little anxious to see the festival crowd’s reaction.

“I like to see if people walk out,” West says with a wry smile, his eye fixed on the theater door. “We may lose a couple people — in a good way. Like, ‘This movie’s going someplace I don’t want to go.’”

West has made a career out of forcing his audience out of their comfort zones. From his 2005 debut, The Roost, to his 2009 indie horror hit, The House of the Devil, not to mention his 2011 ghost story, The Innkeepers, or his 2013 found-footage terror, The Sacrament, the filmmaker has fiddled with narrative conventions and truly surprised discerning genre fans.

And now West is back, ready to toy with a new genre: the Western. Featuring his first star-studded cast in Ethan Hawke, John Travolta, and Taissa Farmiga, In a Valley of Violence tells the story of Paul (Hawke), a wandering gunman drawn into a cycle of revenge and violence. Again, the director is up to his old tricks, and the film unfolds with a pleasing unpredictability.

The surprises start with the characters.

“With a movie like In a Valley of Violence,” West explains, “I wanted to set up all these archetypes and then do something totally different with them than you’d expect. It’s a movie about all these people who are in this violent revenge movie who are ill-equipped to be in this movie. And they don’t find that out ‘til the shit hits the fan.”

Marshal (Travolta) and his belligerent son, Gilly (James Ransome), are the film’s primary antagonists, yet they’re hilarious. “In a Western, there’s usually a bravado of the characters to act the way they’re supposed to act,” West notes. “To me, in real life, that’s not how it goes. In this movie, once all the violence starts and comes back to haunt everybody, you start to see them be like, ‘I don’t want to do this anymore. This is too much.’ Even though they’re the bad guys, they’re still upset when their friends die.”

In a true Hitchcockian turn, West pulls a masterful bait and switch by having a hero who’s not a consistent moral center. “I thought that was an interesting dynamic,” West explains, “to take you on this ride with this character and get used to him, maybe discover he’s not a great guy, but he’s your guy in this movie. When he comes back doing what you want him to do, when you see the ramifications of what he’s doing you’re like, ‘Dude, maybe chill out a little.’”

As the film’s “hero” and “villain,” Hawke and Travolta shine in this morally ambiguous environment. About working with Travolta, the filmmaker fans out a little: “You can tell Travolta gets the movie. Travolta gets my movie and loves it. This is awesome.”

West discusses how few contemporary films challenge their audience with character and narrative, asking them to step outside of their formulaic comfort zone. “There’s an interesting thing happening where audiences have expectations for movies, and if it’s not what they expected it to be, they resist it,” West contends. “It used to be, ‘You’re the movie’s guest.’ Now all the movies are catering to the people so much.”

Because of this, something has been lost in modern filmmaking. “Movies are rarely cinema anymore,” West says. “They feel like commercials in a way. It’s really great to turn a profit, but at the end of the day, it’s devalued cinema as a thing.” For the director, this devaluing of cinema, that great ineffable ideal to which true artists aspire, is irreversible. “We don’t get to go back to more traditional cinema,” West adds, “and if we get away from it, you condition audiences to not understand it. That’s a scary thing.”

So, in order to combat this “devaluing,” West believes a return to hands-on, CGI-less filmmaking is the answer. “There’s no sense of human beings making things or risking things,” West says. “The beauty of cinema is that some crazy people went out and made this thing. That’s the spirit of movies I miss. People taking risks. Human beings creating things.”

And the filmmaker is truly invested in the creation of all his films, from inception to directing and finally to editing. “To me, screenwriting, directing, and editing are the same job, which is filmmaking,” West argues. “When I think of this movie in my head, I see it the way it’s cut together. I watch it like a movie. So why don’t I just do it? I operate the camera, too, and it’s not because I think I’m amazing. It’s because I want to feel like I’m part of it.”

This is the only way that West can imagine working. “This isn’t just my career,” he says. “This is my life and I want to feel like my hands are dirty. Otherwise, I feel disconnected and I feel weird. I want to be in there and part of everything, so my DNA is part of this movie.”

To place himself within every frame of his films, this is what West considers his duty as a lover and creator of cinema. “I’m not that interested with plot or realism in movies,” he points out. “I’m interested in cinema as a thing. It’s something that’s really unique, like this performance, if not for this person, would never be like this. If this person who directed this movie didn’t direct it, it wouldn’t exist. That’s what I get excited about because that feels like a contribution to this thing that I love so much.”

To assist him in bringing this atypical Western to the big screen, West turned to Blumhouse mastermind Jason Blum, the blockbuster producer who has made a business out of lower-budget genre fare. For West, Blum offered a can-do attitude that was refreshing in the industry’s normally harsh climate.

“Jason is awesome because he makes movies, and I can’t stress that enough,” West describes. “People in Hollywood talk a lot about making movies. When it comes time to make a movie, everyone goes running for the hills. Jason, he makes movies. And that’s huge.

“That’s what’s good about that budget level,” the director continues. “You can make all kinds of different movies.”

And In a Valley of Violence is a different kind movie, a true anomaly in today’s market. It’s a Western with a gallows sense of humor and an erratic narrative. But erratic works for West, whose films require audiences to abandon any expectations and follow the mad filmmaker where he wants to take them.

“That’s what you hope as a filmmaker,” West insists. “Come in and just let go. If you don’t know what’s going on for a second, just relax. We’ll get there. It’s an hour and a half. You’ll get back to life soon enough.”

Right now, the deep theater bass has ceased its rumbling, and the film’s shocking scene is over. The director and I wait for someone to leave the theater, disgusted or shocked. A moment or two passes and not a soul has left.