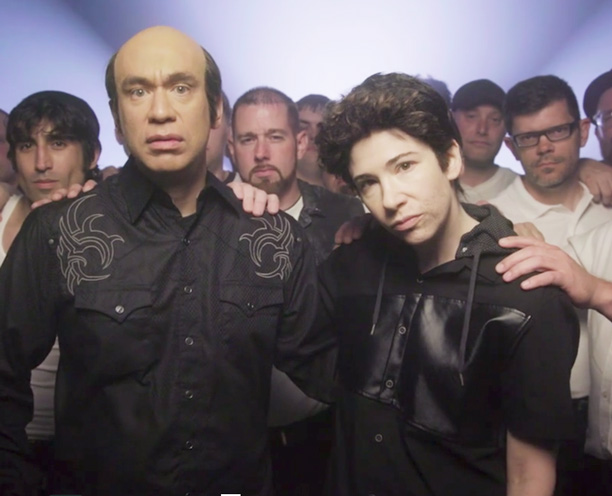 They’ve poked fun at wannabe DJs and farm-to-table wackos, now for Portlandia’s upcoming seventh season, Carrie Brownstein and Fred Armisen have a new target in their sights: the awful and awfully ignorant creatures that make up the men’s rights movement.

In a new teaser, the show’s stars portray two men who feel marginalized by today’s society. “None of these movements are about us,” a balding Armisen says, during a discussion about feminism and Black Lives Matter. While leisurely riding their bicycles down the street, they also talk about the few safe spaces left for men like them (Reddit, go figure), what it’s like to be a minority, how unfair it is that no one talks about the boyfriends of the women’s rights movement, and why they want a male equivalent of the Statue of Liberty.

All of this talk is spliced, meanwhile, with a music video for an MRA anthem called “What About Men”. Minus the painfully entitled lyrics (“What about men! Don’t suppress us! We’re people, too!”), it’s a pretty hilarious and catchy number.

Check out the clip below via EW.com. Season 7 of Portlandia premieres on IFC on January 5th — though perhaps not every familiar face and bookstore will be back.