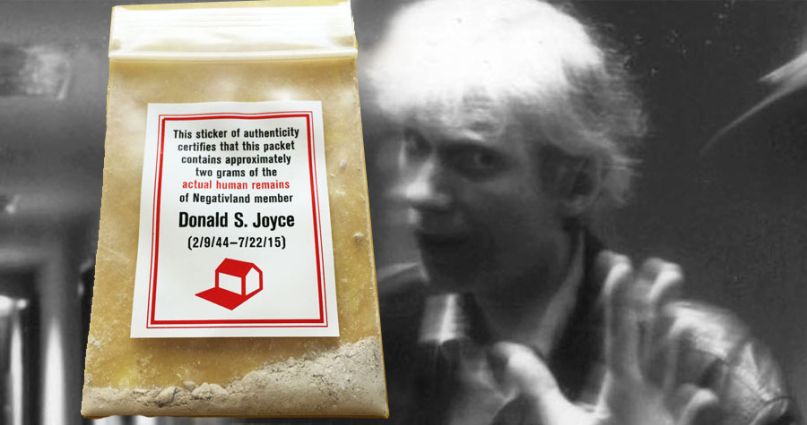 Negativland have always been high-concept in their releases, with advertising and merchandising campaigns closely connected to an album’s theme. But the experimental collective’s latest idea may be their most daring ever: Fans who pre-order Negativland’s new album, The Chopping Channel, via their website will received a two-gram bag of late band member Don Joyce’s actual cremated remains.

Joyce passed away in July of last year, but was still kicking while the band worked on The Chopping Channel. Though he left no specific instructions for his remains, the band wrote in a statement for Boing Boing that, “We are pretty sure he would have wanted it this way.”

“This is not a hoax,” the statement read. “We’ve decided to take the Chopping Channel concept to its logical conclusion by ‘productizing’ an actual band member. It is also a celebration of the degree to which no idea in art was ever off-limits to Don, and offers a literal piece of him, and of his audio art, for the listener to repurpose and reuse.”

In response to some questions on Facebook, Negativland clarified that they are not selling Joyce’s remains; they’re including them as a free gift along with pre-ordered copies of the record. “It’s not a random thing that his ashes are part of the project,” said the band. “They actually fit the concept perfectly. Once you hear it, you’ll understand.” They’re also bundling it with one of Joyce’s own “handmade audio tape loop ‘carts’ used in the creation of [the band’s livemix radio show] Over The Edge and Negativland live performances between 1981 and 2015.” So it’s not all so morbid.

There could be more to come, however. Over the last two years, Negativland also lost Richard Lyons and Ian Allen. “Before he died, Richard said to us, ‘whatever you do with my ashes, just make sure it’s different from what you are doing with Don’s (he knew what the plan was), and make sure it’s funny,'” wrote the band.

Serving as Volume 9 in Negativland’s long-running album series created from edits of the Over The Edge radio show, The Copping Channel is out on October 21st. For you chance at some of Joyce’s ashes and tapes, pre-order the album here. In the trailer below, watch the actual packaging process for the cremains.