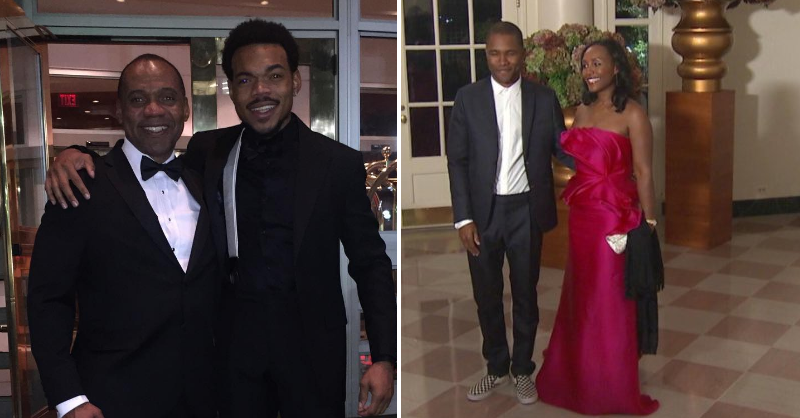 President Barack Obama loves two things: his country, and Chance the Rapper. (Okay, obviously there’s more than that, but just go with it.) Maybe it has something to do with the fact that Chance’s dad, Ken Bennett, worked as Obama’s deputy assistant back when he was an Illinois senator, but POTUS can’t get enough of Lil Chano. He’s featured the rapper on playlists, sought his input on the “My Brother’s Keeper” initiative, and invited him to sing at this year’s National Christmas Tree Lighting event.

The bromance took another step forward tonight as Chance is a guest at Obama’s final White House State Dinner. As you can see in the images below, Chance’s took his father as his guest, and the Bennett boys couldn’t look happier to be there.

Thanks Dad for raising me right. Look at us all fancy for the White House. I ain't even wearing a hat tonight #BlackBoyJoy pic.twitter.com/cCnHJL9EFP

Chance isn’t the only musical invitee on hipster Obama’s guest list, either. Frank Ocean is also at the dinner, along with his mother, Katonya Breaux.

I am so blessed to have a son that includes me in his once in a lifetime events!!! I just hugged our First Lady!!!! #statedinner pic.twitter.com/Q0qTVsk2nK

It doesn’t seem that either artist will perform at tonight’s dinner, as that honor went to Gwen Stefani, who arrived with her boyfriend, Blake Shelton. With the White House State Dinner celebrating Italy, everyone partook in a meal prepared by Crocs-wearing celebrity chef Mario Batali.