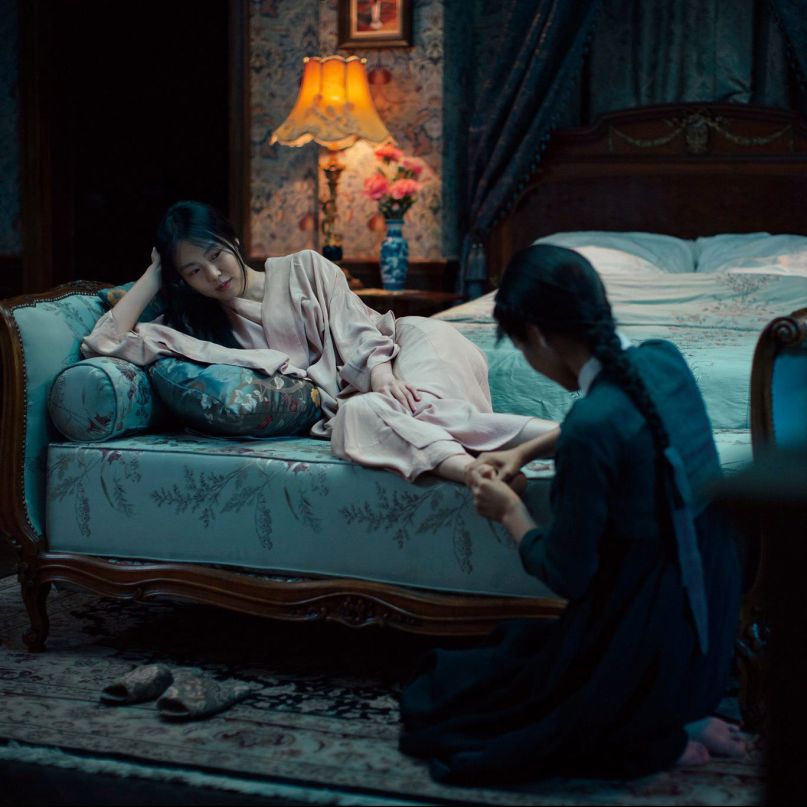 “Where I come from, it’s illegal to be naive.”

Sometimes, Lady Hideko (Kim Min-hee) wakes up screaming in the night. She’s never known all that much of the world beyond the lush estate in which she and her Uncle (Cho Jin-woong) live with their large, subservient waitstaff. Hideko doesn’t get out much in general, though. She wears long gloves to cover her perpetually frozen hands. Sometimes, she performs readings from her uncle’s vast, priceless collection of literature for select guests of his choosing. But she spends her days in relative solitude, outside of the presence of her handmaiden, who sleeps in a small closet just outside her bedroom door.

Sook-hee (Kim Tae-ri) is Hideko’s handmaiden, but she’s only Sook-hee to the residents of the house. Sook-hee is also Tamako, a pickpocket raised in a den of expert grifters. Her presence in Hideko’s life, like much of what transpires in The Handmaiden, is not what it seems. Park Chan-wook’s latest film is his most accomplished to date, ascending to such heights of pure filmmaking that it’s easy to be distracted from just how deliciously perverse a film the director has made. And “distraction” as a concept is essential to The Handmaiden, from its sleight-of-hand storytelling to the way in which the filmmaker’s opulent direction peels back the film’s many layers with a mixture of humor, grotesquerie, and sweeping romance executed so flawlessly that it almost feels unbelievable. This is tawdry, unsettling, funny, lurid cinema at its most singularly enjoyable.

The Handmaiden is that rare kind of film that truly benefits from the viewer going in and knowing as little as possible about it, and while the following review will tease out some of the film’s details, perhaps even this might be more than you wish to know. So you’ve been warned accordingly. The film takes place in 1930s Korea, under Japanese colonial occupation, as Sook-hee sets out to execute the perfect con. With the help of the dubious Count Fujiwara (Ha Jung-woo), a fellow hustler who’s mastered the art of insinuating himself into the highest circles of society, the two set out to establish the Count as Hideko’s ideal romantic partner, marry them off, and claim her riches. Their plot is cruel, made all the more evil by just how perfect of a target Hideko is.

Suffice it to say, nothing in The Handmaiden is what it seems. As Hideko’s relationship with Fujiwara grows, so too does a different and more powerful kind of relationship with Sook-hee. And all the while, the mysteries of the house, and of Hideko’s uncle, begin to intersect with the three central figures’ lives and plans in ways none could anticipate – or so it would seem. After a point, it’s to your benefit to turn off the instinct that might push you to try and stay a step ahead of the film, or suss out its many twists and deceits and double-triple crosses. After all, the pleasure of The Handmaiden lies not just in the way Chan-wook manages to continuously surprise the audience, but in the alternately funny, depraved, and emotionally rich ways he does it. It’s the kind of film that’s great as a puzzle box, and substantially greater as a sensory experience.

And it’s one that’ll demand every sense you can offer. The Handmaiden plays at times like a greatest hits compilation of some of Chan-wook’s most daring aesthetic choices: the sterile, affluent beauty of Stoker; the saturated darkness of Thirst; the high-contrast bursts of color that characterized some of Oldboy’s most memorable setpieces; the bold and meticulous set design of all those and more. It’s a film that pays careful attention to every aspect of itself, from Jo Yeong-wook’s jovially devious score to the film’s breathtaking uses of light and color. Chung Chung-hoon is called upon to execute a wide swath of visual modes throughout the film, and the cinematographer does so with grace, imagining every part of the mansion and the surrounding property as its own realm of fantasy. The murky lights within the house recall great watercolor work, the light softly filling whatever it touches. A blossoming tree outside is unimaginably vibrant. The uncle’s reading parlor, one of his many slavish attempts to insinuate himself into the Japanese gentry of the time, is a different, more sterile, and far less inviting place than the others. Each scene is picturesque in its own way, and Chan-wook lingers over each of them, drawing the eye into every visual flourish or dissonance with total assurance.

The Handmaiden is also a film deeply concerned with the notion of looking, whether at art or at another person or, on a more metatextual level, at film itself. For a film which concerns itself with sexuality in its many iterations, The Handmaiden is also remarkably thoughtful about that sexuality, and yet also playfully, almost campily aware of the likely responses to it in turn. This is probably as good a time as any to mention that this is an explicitly erotic film, but it’s also one remarkably thoughtful about sex, and what it can be onscreen. Chan-wook is interested in titillation, to be sure, and indeed there’s at least one central setpiece likely to send even seasoned viewers into fits of throat-clearing. But that sequence is also about the vibrant fury of discovering somebody with whom you may have found something genuine and real. And as the film reveals its true depths, The Handmaiden manages to do something that cinema so rarely does: exhibit a whole spectrum of sexuality, from its most power-hungry and repugnant to its most ecstatic highs.

Power, and the illusion of it, is the film’s other fixation. At one point, Fujiwara envisions true power as the ability to order whatever wine he might like at a restaurant without worrying about the price. Sook-Hee is constantly reminded that she’s one slip of the tongue away from destroying the con and finding herself right back where she started. In flashbacks, Hideko learns that power is most often maintained through demonstration, but can be subverted. All the while, the specter of occupation only helps to cement the film’s ecosystem as one of power and exploitation on all sides, where the roles of dominance and submission are as fluid as the film’s ever-shifting allegiances. Chan-wook’s screenplay, co-written with Chung Seo-kyung and adapted from Sarah Waters’ novel The Fingersmith, negotiates these dynamic shifts so smoothly that it almost feels effortless. But that feels like too flippant a phrasing for a film so meticulously well-considered as this one is.

And what’s more powerful than the ability to look, or less so than the inability to prevent oneself from being looked at? It’s a question The Handmaiden plays with in endlessly creative ways, particularly when the film’s twists begin to pile up. One bravura sequence, set during one of Lady Hideko’s readings for her uncle’s associates, plays this idea out in a way that’s at once heartbreaking and powerful, Chan-wook swinging the pendulum of control around the room with abandon. Whether in occupation or at home, somebody in The Handmaiden is always exploiting someone else in some way, except for the one moment of the film in which that becomes sublimely untrue, the world going quiet save for the far-off sound of tinkling bells.

The Handmaiden is film at its most exhilarating by a director at the height of his powers, and it’s the kind of singular rarity that must be savored when it comes around. Give in to its spellbinding power, and it’ll take you places that even some of the best filmmakers of this era wouldn’t dare to tread. Just remember that nothing is as it seems.