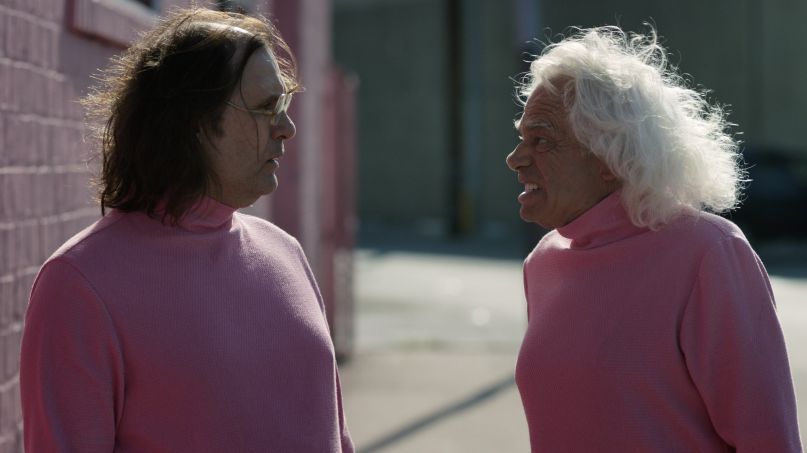 I don’t remember the first time I saw Citizen Kane, but I remember the first time it really hit home. I was a high school student in the midst of a medical sabbatical, suffering at home post-wisdom teeth removal. Was it the combination of painkillers, apple sauce, yogurt, and soup that brought to life the magic of Orson Welles’ direction? The innovation of those angles, line deliveries, and movement? Although it’s as tired a belief as you’ll find within film circles, it’s still the best movie. There is a spirit and originality behind the lens and in front of the camera that filmmakers have been chasing ever since.

The Greasy Strangler is not that movie, but I invoke memories of Kane to paint a picture of what should be important to a filmmaker or aspiring filmmakers: Don’t retread. Be true to yourself. A twist isn’t essential. Do different. Don’t worry about finding analogies in the obscene. Be obscene. Jim Hosking followed the beat of his own path when making his debut film, or should I say, the grease of his own spoon. There is no underlying message waiting to be discovered inside The Greasy Strangler. Two of the film’s producers are Elijah Wood and Ben Wheatley (Kill List, Doctor Who, High-Rise), both of whom saw something in Hosking that convinced them to help him create what would have been classified in the UK as a “video nasty.” The whole thing is its own greasy, grisly monster, stripped away from any real film conventions other than the credits at the end.

How do you review a movie that isn’t created for critical analysis? I won’t hear that the same can be said for movies like Transformers — movies so devoid of imagination and designed solely for toys and make-things-go-boom in melodramatic ways. Greasy basks in its own deliberate stupidity in a way that hasn’t been seen since the heyday of Troma Productions and their (in)famous characters The Toxic Avenger and Sgt. Kabukiman. Lloyd Kaufman’s movies set out to disgust and maybe even astonish, eschewing any notions of “quality.” The Greasy Strangler is a movie about just that. Set in an anonymous city filled with eccentric characters played by amateurish performers, Greasy follows the “story” of the father/son team of Big Ronnie (Michael St. Michaels) and Brayden (Sky Elobar, doppelganger of Eric Wareheim). They spend their afternoons wearing matching pink shorts and long-sleeved shirts, giving disco tours to paying customers. We learn where the Bee Gees wrote their biggest hits, where Earth, Wind & Fire used to live, and where Kool and the Gang’s Kool worked.

Like the movie itself, it’s all nonsense, or as either Big Ronnie or Brayden would refer to it: “Bullshit!” The thrust of the film takes place during the late hours, when Big Ronnie prowls the streets bathed in grease, killing strangers and acquaintances alike. There is no motive revealed. He just does this so the audience can squirm, laugh uncomfortably, or even walk out. Occasionally people’s faces cave in from a greasy punch, but more often than not we just watch their eyes pop out of their sockets. Sometimes Big Ronnie takes the time to eat said eyes.

If you are intrigued by this premise, good for you. If you are revolted, good for you. The Greasy Strangler isn’t designed to entertain everyone. It’s created for a specific audience — one that revels in the obscure and incoherent, the secular and the profane, the violent and the offensive. Plot is secondary to the design. Nothing is off the table. There is a sequence in which Big Ronnie dances down an empty street, lit by a spotlight and score straight out of Killer Klowns from Outer Space. Then it ends. We’re on to the next scene as though nothing happened.

Hosking believes that once you repeat the joke, you better repeat the hell out of it. If you won’t adhere to comedy’s “rule of three,” then you better create the new “rule of 25.” There is a scene in which a man cannot understand that another is trying to say “potato” that goes on for 90 seconds. People call each other “bullshit artists” for three minutes straight. Post-coitus, a couple dances in place and sings “Hootie-tootie, disco cutie” over-and-over-and-over-and…

Are you still with me? It’s probably time to give credit where credit is due. For all of its crassness, the movie is competently shot. Scenes have just the right amount of light, whether it’s natural or stage-lit. Sequences are staged as well as anything you would find in a more commercial film. It takes a lot of work to make something look like it was made with little effort, and Hosking succeeds in this respect. The performances he gets from Michaels, Elobar, and the object of their characters’ affection or lust or horniness, Janet (Eastbound and Down’s Elizabeth De Razzo, down for anything Hosking asks of her), are never less than hilarious. Just how in on the joke Michaels is, in particular, is irrelevant. No one steals a scene from him.

Stocked with full-frontal nudity, outlandish violence, outrageous sex, and eccentric characters from start to finish, The Greasy Strangler is a movie that has to be experienced to be believed. It goes on a little too long and isn’t as effective in the very end as it is at the start (blame desensitization). However, in a current climate where most movies are beset by moping twentysomethings who can’t get it together or teenagers rallying together to save the world, it’s refreshing to follow a greasy strangler and his weirdo son in a weirdo world where nothing makes sense from minute to minute. Original thought is in short supply these days. The Greasy Strangler is not. Whether too much freedom is a good thing, well, I’ll leave that up to you bullshit artists!