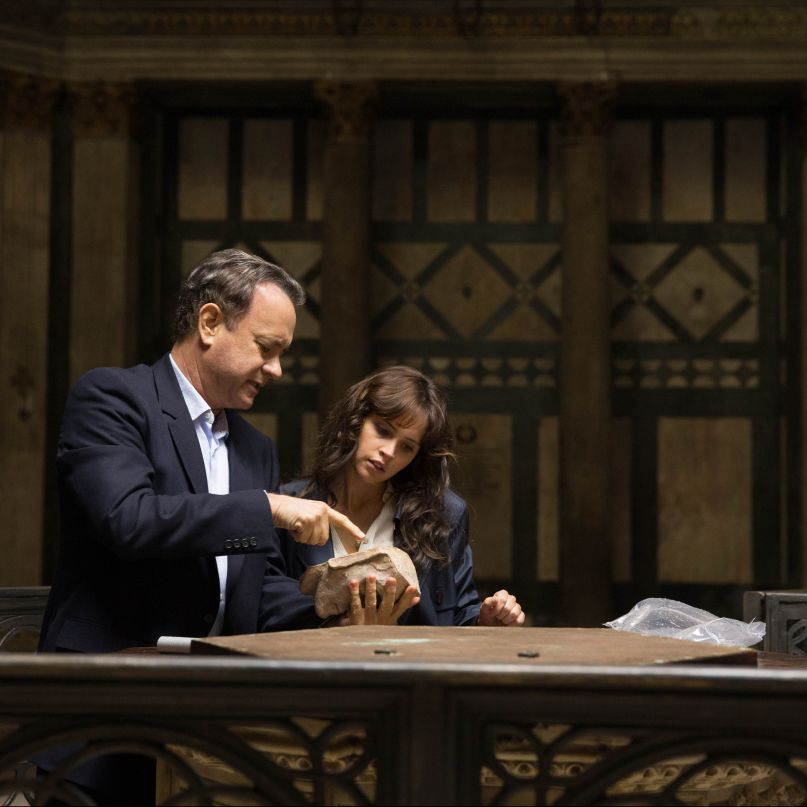 If there are two things Dan Brown loves more than anything else in the world, those would be running and explanations. In fact, he may love them even more than religious-historical conspiracy theories, since that’s the only one of the three missing from Ron Howard’s latest adaptation of Brown’s series of Robert Langdon novels, Inferno.

In The DaVinci Code, Harvard ‘symbologist’ Robert Langdon (Tom Hanks) had to solve mysteries relating to an alternate history involving Jesus and Mary Magdalene, while Angels & Demons saw Langdon unlocking the secrets of the Illuminati and the God Particle. Inferno’s connection to religious antiquity is the thinnest of all, using the history and works of Dante as a trail of breadcrumbs left by a dead, psychotic billionaire (Ben Foster, mostly seen murmuring arch monologues through laptop screens) to track down and stop a manufactured virus of Foster’s creation – one that will cull half the world’s population.

If you’ve seen either of the two previous Langdon films, nothing in Inferno will surprise you. It plays out like every tawdry, contrived potboiler you’ve ever picked up at an airport to flip through during a layover. Langdon wakes up with amnesia and a bullet wound in his head! He must use his extensive knowledge of religious history and symbols to crack a convoluted case with the world at stake! There’s a spunky, resourceful brunette (this time played by Felicity Jones) to whom he can exposit! He’s on the run from shady government organizations with spooky names like “the Consortium” and … the World Health Organization? Rinse, repeat.

The biggest challenge for Inferno is that a significant part of the previous films’ appeal was the exploration of bizarre conspiracies about religious and papal history. Here, the Dante stuff is just a superficial gimmick for a thoroughly average techno-thriller. The classical art angle doesn’t reveal any shocking conspiracies about religious history this time – it’s just the thinnest excuse yet for Hanks to babble apocryphal trivia about Dante’s Inferno to whomever happens to be standing next to him. If Foster’s character had just been obsessed with The Smiths instead of Dante, Inferno would consist of Tom Hanks and Felicity Jones running hurriedly into used record shops, flipping through reams of vinyl for clues while Hanks spouted reams of exposition about Morrissey’s secret past.

All things considered, Inferno is made well enough, which is the only benchmark of quality one can truly expect from a Ron Howard film – after all, he’s made a cottage industry out of competent mediocrity. Howard gets to have some fun in the first few minutes, as the disoriented, amnesiac Langdon wanders through genuinely disturbing images of the Apocalypse as he wakes from his injuries. Unfortunately, nothing nearly that interesting pops up again during the film’s remaining two hours, Howard content to let the sumptuous Italian architecture do much of the work for him while a chirpy, overbearing Hans Zimmer score drones overhead.

David Koepp’s script is also repetitive in a way the other two films weren’t; while the comparative paring down of the plot into a largely straightforward chase narrative is admirable, the non-stop sequence of “Leads run from bad guys to place > find next clue and explain it to each other > bad guys come back and shoot at them, so leads run while continuing to explain” becomes incredibly tiresome as the film goes on. Even some weak-sauce reveals late in the film (which anyone with a brain will be able to guess from the get-go) fail to add anything interesting to the proceedings.

On top of that, the film takes itself so incredibly seriously that it’s hard to even appreciate the multiplying absurdities of the story on a camp level. As soon as a manipulated map of Dante’s Inferno appears through a mini-projector encased in carved human bone, which itself is hidden in a ‘bio-tube’ keyed only to Langdon’s fingerprint, and you don’t laugh, you know you’re in trouble.

Inferno, much like its predecessors, simply can’t work its way out of the disappointing middle ground between a slick, technically competent thriller and tongue-in-cheek absurdity. After all, its problems lie in the source material – paper-thin, overly convoluted tales meant to fool less scrupulous audiences into thinking they’re watching something complex and learning something about history in the process. As it stands, Howard’s Brown adaptations feel like the dour cousin of the National Treasure movies – a series that enjoyably embraces the ridiculousness of its pseudo-historical claptrap. Basically, what I’m saying is that a Tom Hanks-Nicolas Cage team-up could very well save this series.