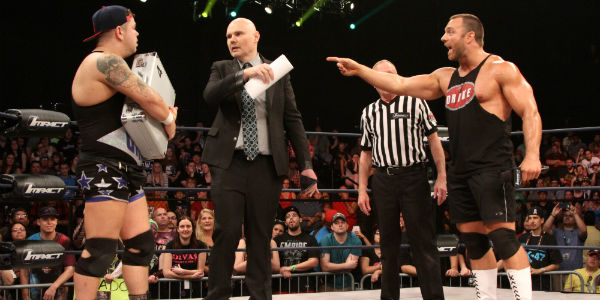 Alas, today may not have been the greatest day that Billy Corgan has ever known in his time in professional wrestling.

It was reported earlier this month that Corgan had filed a request for a legal injunction prohibiting the sale of TNA Impact Wrestling until he was repaid his debts in full, as promised. (Corgan serves as TNA’s president and invested heavily in the company throughout 2016.)

A hearing for Corgan’s suit was held in Nashville on Monday. According to The Tennessean, the judge ruled that while Corgan is owed the full repayment of his three loans to the company, he didn’t meet the requirements to prevent the company from taking alternative actions to settle its debts.

“Corgan, represented by Nashville attorney Scott Sims, argued the company is insolvent because it owes significantly more money to creditors, contractors and in business taxes, than it is bringing in.”

TNA attorney Travis Parham argued that Corgan’s lawsuit was part of an elaborate scheme to take control of the company. Parham said TNA had offers to sell the company and to repay Corgan with interest.

Temporary injunctions such as the one sought by Corgan are rare and legally difficult to attain, and Hobbs Lyle said in her ruling that he did not meet that burden of proof. Corgan is due to be repaid by Nov. 1, putting the case on a fast track.”

Whether Corgan is repaid or not, it looks like his efforts to absorb and rebrand TNA Impact Wrestling will likely not shake out at this time. The future of the company is now unclear, but truly, the world of sports entertainment has been a vampire, sent to drain Corgan’s coffers.