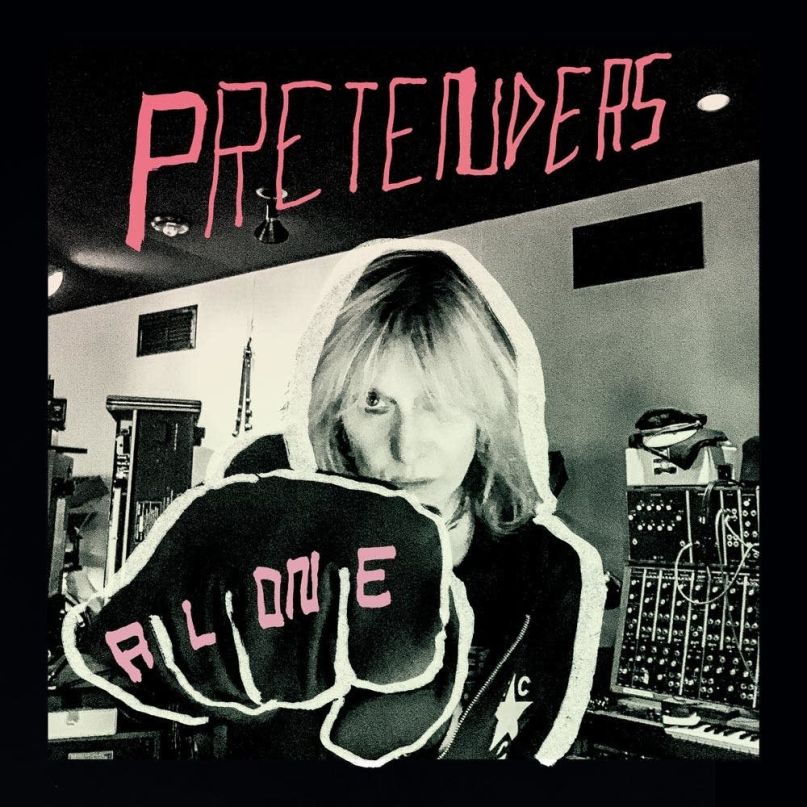 Don’t let the name fool you: Chrissie Hynde is The Pretenders. Two of the band’s four original members, lead guitarist James Honeyman-Scott and bassist Pete Farndon, have passed, while drummer Martin Chambers has been in and out of the group for years. But Hynde has never strained under the weight of keeping the Pretenders moving and active. If the title of Alone, Hynde’s first Pretenders effort since 2008, is to be believed, she actually prefers the space and freedom that comes with running her own ship.

“Nobody tells me I can’t,” she speak-sings with street tough conviction on the record’s title track, a sleazy blues opener. “Nobody tells me I shan’t. Nobody to say ‘You’re doing it wrong.’ I’m at my best at where I belong, alone.”

It’s tempting to believe her. Hynde is arguably one of rock’s original independent women. She’s long made her own way through a largely male-dominated rock and roll world with great success, all while keeping her band running, even with a revolving carousel of musicians. Still, even the most iconoclastic of frontwomen need some assistance. On Alone, Hynde paired up with the Black Keys’ Dan Auerbach, who undertook production duties on the new 12-track effort. Both are native Akron, Ohioans, but beyond that it’s hard on the surface to see where the two sides meet. But Alone works thanks to Hynde’s willingness to fall into Auerbach’s world of vintage blues, soul, and R&B, the same that made latter day Keys’ records like Brothers, El Camino, and Turn Blue sound equal parts classic and fresh.

Auerbach steers Hynde into a lot of new sonic territory, but he’s also smart enough not to deviate too far from what’s always made the Pretenders’ work, which has always functioned as a great combination of opposite moods and attitudes. Pretenders songs can be tough and gritty in one moment and sweet and sentimental the next. That much stays the same on Alone. The record’s first four tracks alternate between rugged guitar blues (“Alone” and “Gotta Wait”) and groovier, more soulful fare (“Roadie Man” and “Never Be Together”). Credit Auerbach with orchestrating a crew of musicians including seasoned Nashville session players, his Arcs bandmates Leon Michaels and Richard Swift, and a cameo appearance from guitar legend from Duane Eddy to bring his reinvented Pretenders vision to life. Then there’s Hynde, her voice the constant between the record’s contrasting moods and styles. As long as she’s commanding the mic, the Pretenders’ stamp is indelibly made. The result is a record that sounds like the Pretenders, though also unlike anything the group’s done previously.

Lyrically, the first third of the record finds Hynde committing to her happy-to-be-untethered point of view, but the rest of Alone reveals Hynde to be something of an unreliable narrator. As the record progresses, the harder edges give way to smoother, more delicate songs that find the singer yearning for something that’s missing. “Now I found you, let’s get lost,” Hynde sings on the ethereal “Let’s Get Lost”, one of several songs that break through her iron constitution. The facade continues to deteriorate further on “Be the Man That You Are”, on which Hynde lobbies for truth and honesty over the material things that can come to define a relationship. Not that she’s happy to wilt at the power of love (“I hate myself, I hate myself, I hate myself for being jealous,” she laments over the blue-eyed ’60s soul of “I Hate Myself”), she’s just as prone and vulnerable to the stings of heartache and want as anyone.

By the arrival of the record’s second to last track, “Death Is Not Enough”, Hynde’s transformation from empowered loner to someone longing for companionship is complete. She might be conflicted, but Alone revels in the kind of humanity that’s long made Hynde’s best work with the Pretenders tick. There’s how we try to present ourselves, and then there’s the truer feelings that bubble beneath the surface. Fortunately, Hynde still understands the value of letting her true colors show through her invincible veneer.

Essential Tracks: “Alone”, “Let’s Get Lost”, and “Death Is Not Enough”