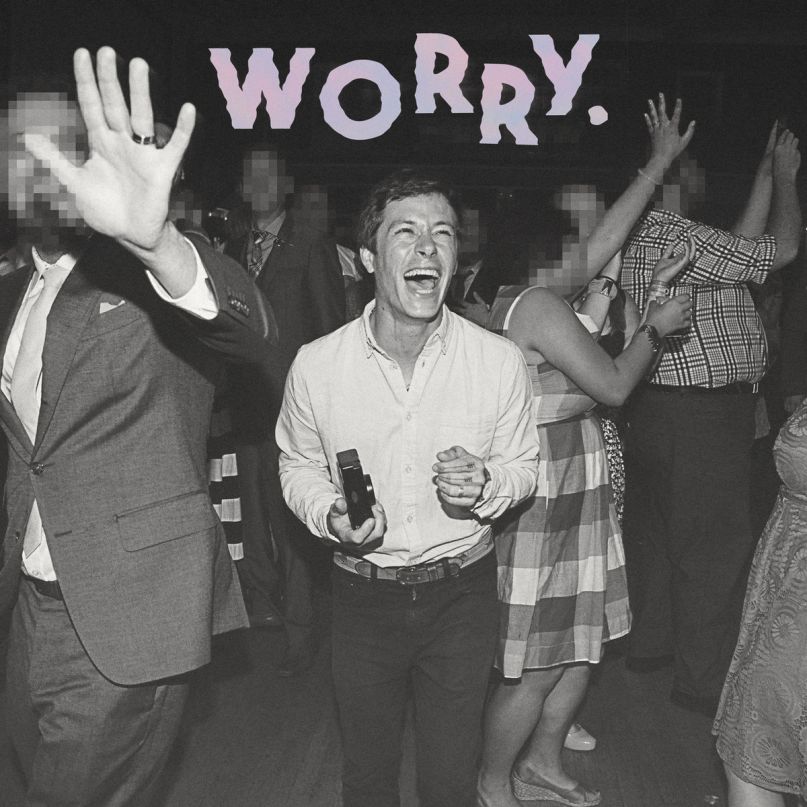 Despite what the title of his new record, WORRY., might insinuate, Jeff Rosenstock is a positive guy. This is clear, in part, because the photo on the cover of Jeff Rosenstock’s new record, WORRY., was taken at his wedding last year — and yes, it is odd that he would use an image from what should be one of the happiest days of his life to visually represent an album full of hopelessness and doom, albeit the kind that is instantly catchy, infectiously energetic, and wholly unique.

WORRY. has a few consistent themes running through it: “To Be A Ghost…” and “The Fuzz” both draw inspiration in part from the horrific trend of young black men killed by the police (frequently under dubious circumstances), and how the internet, meme culture, and a general feeling of omnipresent dread can sink your psyche. Likewise, “Staring Out The Window Of Your Old Apartment”, “Bang On the Door”, and “HELLLLHOOOOLE” are the latest additions to Rosenstock’s ever-deepening catalog of songs about hating shitty landlords, crummy apartments, and/or New York City living in general. (See also: Bomb the Music Industry!’s ”Slumlord”, Rosenstock’s “The Trash the Trash the Trash”).

The record has its cute moments, too: “Pash Rash” is a song indebted to jangly Brit rock both musically and lyrically, as Rosenstock does his best to romantically sing, “I want to listen to the Cribs, my dear/ While we make out in your car,” before begging to see his love’s face again in person, instead of having to rely on viewing her “through AMOLED displays” on his cellphone. Rosenstock’s desire for his partner and his disdain of technology pop back up in “Blast Damage Days”, as he sings, “These are the Amazon days/ We are the binge-watching age/ And we’ll be stuck in a screen until our phones fall asleep/ Oh, I am never letting go of you.” Atop a loping 3/4 beat, it’s not hard to imagine Jack and Marla from Fight Club waltzing along to it as skyscrapers collapse around them.

While WORRY.’s A-side is anchored with hooky, pop punk goodness (“Festival Song”, “Wave Goodnight To Me”), the album’s B-side will likely be remembered for the sheer volume of songs provided. Rosenstock delivers 11 songs in 19 minutes, with the final eight all segueing into one another. Some might think of this as an Abbey Road homage, but it feels closer to Rosenstock’s attempt at Short Music For Short People than anything else — the songs quickly jump from punk (“Bang On the Door”) to ska (“Rainbow”) to hardcore (“Planet Luxury”) and back again. It can be overwhelming at first listen to have the album pinball around so quickly if you’re not expecting it, but it’s reflective of Rosenstock’s personality as a whole, and the connective tissue between each grows stronger with subsequent listens.

WORRY. is the capper on a whirlwind four years for Rosenstock as a solo musician, starting with 2012’s I Look Like Shit demos collection, continuing with 2013’s Summer EP, and breaking wide with last year’s We Cool?. At the same time, WORRY. feels like the true start of Rosenstock’s solo career, with a backing band that is finally locked in, a record label 100 percent behind him, and a tower of critical accolades growing taller each day.

Essential Tracks: “Wave Goodnight To Me”, “Festival Song”, and “HELLLLHOOOOLE”