A Punk Playlist for the Dying Days of Donald Trump 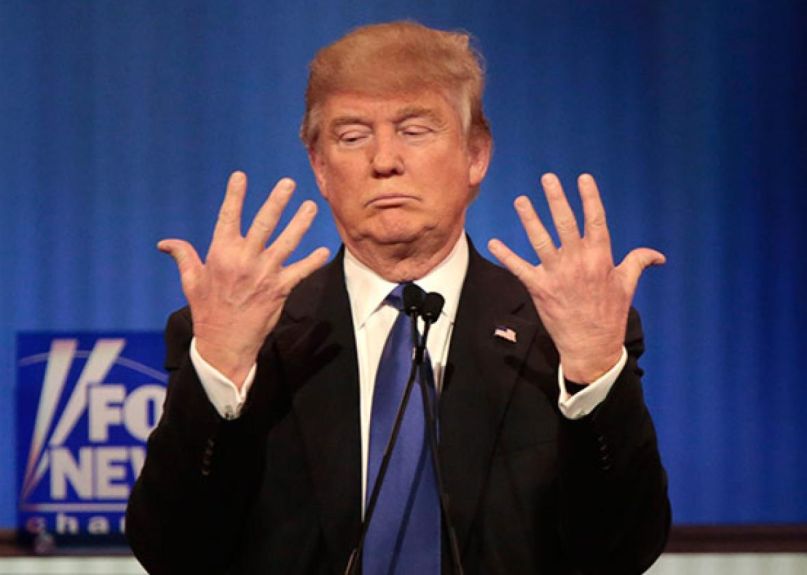 Punk as Fuck is a monthly column in which Associate Editor Collin Brennan discusses issues in punk music and culture. With the presidential election just around the corner, this month’s column says goodbye and good riddance to Republican nominee Donald Trump.

No nightmare, no matter how frightening or repugnant or tangerine-hued, can stretch on forever. That’s what I’ve been telling myself lately. It’s a way of coping with the tidal wave of shit that streams forth from Donald Trump’s mouth on a near-daily basis and the dawning realization that I live in the same country as millions of racists, xenophobes, and all-around deplorables who lap it up like pigs at the trough. Sunday night’s clown show of a presidential debate marked the latest and lowest chapter in the ongoing Trump saga, but it also marked the beginning of the end. Going by the recent poll numbers and Trump’s plummeting trajectory since his now-infamous “Grab them by the pussy” moment, it’s safe to say that dude is not going to win the presidency. (But that doesn’t mean you shouldn’t vote! Please vote!)

This is good news for humanity in general but perhaps bad news for the health of punk rock, a genre that thrives on political turmoil and tends to be at its best when Washington is at its worst. The silver lining to a Trump presidency may well have been a full-scale blossoming of punk culture, somewhat along the lines of what happened during the Reagan years but with even more piss and vinegar, given Trump’s alignment with causes (white nationalism, wide-scale deportation, corporate wealth-generation) that rank among the ripest targets for punk’s vitriol. Of course, what we’ve lost in terms of a punk renaissance we’ve more than made up for in, you know, avoiding nuclear Armageddon.

I’d say that’s a pretty fair trade-off, especially when you consider how many great anti-Trump punk songs already exist in the world. A handful of them have arisen as a direct response to the trash-humping Republican candidate, while others have been around for months or years or even decades, waiting for the proper moment to resurface. In honor of Trump’s latest snafu (hopefully) closing the door on his candidacy, I’ve compiled a 10-song playlist to give his campaign a fitting send-off. Because if punk is good for anything, it’s for telling pig-headed racists like Donald Trump to fuck right off.

G.L.O.S.S. are no longer a band as of, like, two weeks ago, but the queer hardcore punks from Olympia showed just how fierce punk can still be in their brief tenure on Earth. “Targets of Men” is a weaponized retaliation against the misogynistic culture perpetuated by men like Trump and their “locker-room talk,” and it sounds a hell of a lot tougher than bragging about sexual assault over a hot mic.

Downtown Boys make bilingual, politically radical punk rock that speaks to America’s injustices with equal parts elegance and ferocity. If you’re looking for an anti-Trump anthem, pick pretty much any song from their 2015 debut, Full Communism, which righteously rails against slumlords, racists, and fascists (otherwise known as The Donald Trifecta). “Wave of History” ranks among the groovier and more all-encompassing blasts of sax-powered fury; just as importantly, it reminds us that Trump didn’t come from out of nowhere.

Trump’s rhetoric is at its most incendiary when he’s talking about his beloved Wall, with the underlying implication that Mexican immigrants are somehow “outsiders” in his version of America. Los Crudos, punk legends from Chicago’s Pilsen neighborhood, spoke out against this kind of racist rhetoric throughout the 1990s, pushing back against those who labeled them as outsiders and demanding social justice. Their music continues to serve as a call to action for Latinx communities and as a palliative for demagogues like Trump. Plus, it rips.

For an equally ruthless take on Trump’s proposed Border Wall, we turn to Canadian punks Propagandhi and their 2001 album Today’s Empires, Tomorrow’s Ashes. Keep in mind that this 90-second burner came out 15 years ago, but its central conceit (“It’s about fucking time to treat people with respect!”) still feels like a breath of fresh air after watching videos like this one, taken during a Trump rally in Phoenix.

Speaking of Canadian punks, D.O.A. took that dirtbag cowboy Reagan to task back in the ’80s with “Fucked Up Ronnie”, a tune that makes up for its lack of subtlety (sample lyric: “Ronald Reagan, you’re fucked up!”) by cramming roughly a million distorted power chords into its 90-second runtime. They’ve revived the song for the current election cycle by refocusing the lyrics on Trump and leaving everything else pretty much the same. Hey, why mess with perfection?

Trump doesn’t hide his respect for Vladimir Putin’s strong leadership — the same leadership that routinely gets dissidents killed and arrested. Feminist punk protest group Pussy Riot know a thing or two about the latter; in 2012, two of the group’s members, Nadezhda Tolokonnikova and Maria Alyokhina, were arrested and charged with hooliganism. When it came time to compose their first song in English, they chose to highlight America’s Black Lives Matter movement and the global fight against state terror. You know, like the kind of state terror that results in political opponents being jailed.

When an aging Milo Aukerman looks around at his country and describes it as “the sickest joke I know,” voters of today can probably relate. What the hell has happened to us? America’s strength has always been in its paradoxes — our greatest strife often precedes our greatest success — but there’s a difference between struggle and all-out stupidity. At least Descendents can be counted on to provide a catchy soundtrack to our cultural demise. Drink up and pray for a mostly painless death.

Le Tigre – “My My Metrocard”

There are more obviously politically-minded songs in Le Tigre’s catalog, but this is the only one to proudly include the lyrics, “Oh, fuck Giuliani! He’s such a fucking jerk!” Vocalist Kathleen Hanna is referring to the former mayor of New York City, who also happens to be one of Trump’s staunchest supporters. Yeah, fuck that guy!

“White Minority” is a song that’s often misconstrued as racist (unlike Donald Trump, who is often properly construed as racist). But welcome Black Flag’s snarling brand of sarcasm into your heart, and you’ll find that it’s really an indictment of the mentality that’s all-too-present at Trump rallies: namely, that the white race is disappearing and that this is something to be alarmed about. When Trump finally crawls back into the gold-plated hole he came from, he’ll take with him the last great hope of the white majority. Good riddance.

Finally, a song whose title perfectly captures what it feels like to witness the final days of the 2016 presidential election.