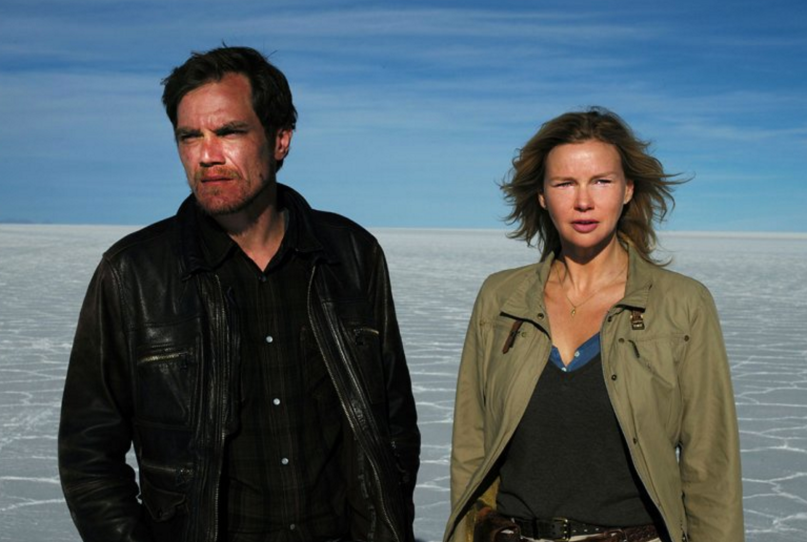 Bookmark and follow our exclusive coverage of the 2016 Toronto International Film Festival.

On their way to investigate a man-made disaster called Diablo Blanco, a delegation of three United Nations scientists are kidnapped by an intimidating but droll collection of terrorists led by a penitent business mogul and an ennui-inflicted scientist in an unidentified South American country.

Separated from the rest of her team – the kidnappers have given them a vicious case of diarrhea and locked them away in another area of their compound – delegation leader Laura (Veronica Ferres) engages in a battle of wits with the businessman, Matt Riley (Michael Shannon) and his partner Krauss (played by actual theoretical physicist Lawrence Krauss) to try to figure out their purpose.

Eventually, Riley gives Laura details about his own environmental agenda and takes her out to see Uturunku, a volcano whose eruption – either imminent or hundreds of years away – could have global implications that could render the rapidly growing salt flats of Diablo Blanco a moot threat. Shortly after, she’s left in the middle of the salt flats with a few days’ worth of supplies and two local blind boys.

While Laura struggles to survive and make sense of what Riley is showing her about this eponymous battle between the Diablo Blanco salt and the Uturunku fire, viewers are similarly stranded in the middle of this meandering film and searching for purpose in this strangely-paced, stiltedly-scripted, and bizarrely acted shaggy dog adventure. Is this an ecological thriller? A searing look at mankind’s destruction of our natural environment? A meditation on how ultimately powerless we are in the face of that same embattled nature? A comedy? An exercise in self-amusement? All of the above?

If Salt and Fire were the work of a lesser-known filmmaker, it’s unlikely that anyone would be willing to participate in this thought experiment. But it’s from writer/director and New German Cinema luminary Werner Herzog, and at this point in his unique and storied career, he’s earned some leeway.

Over time, Herzog has consistently proven to be a filmmaker with interesting things to say about environmental issues — an amusing, meme-able figure in his own right, whose charm can carry the less interesting moments in his filmography — so it’s understandable that viewers would want to give him the benefit of the doubt and assume that Salt and Fire has a purpose that most people just haven’t figured out yet.

Though, the fact that the film isn’t entirely without obvious merit confuses things even further: Krauss is wryly brilliant as Krauss and delivers the film’s biggest laugh with his Herzog-ian reasons for using a wheelchair; Gael Garcia Bernal has a great time as a lecherous member of Laura’s delegation, spinning his suitcase with the sneering verve of a cartoon villain who twirls his mustache and gleefully acts smarmy before being felled by his own beleaguered bowels; Herzog’s shots of Diablo Blanco, portrayed by Bolivia’s real-life Uyuni salt flats, are among the most stunning in any film released this year; Shannon has fun in the impromptu photo shoot that takes place toward the end of the film; and as expected, there’s a fascinating push and pull in the battle between human and nature at the heart of the film’s central premise.

Whether or not these haphazard attributes are enough to sustain a film will largely depend on the individual’s relationship with Herzog. Fans of his unique style and humor will find much to enjoy in Salt and Fire, even if the film does lack some proper cohesion. Anyone who’s wavering in their critical affections, however, can easily use this as an example of what happens when a good artist buys into their own hype and mythology.

Which presents an interesting thought experiment of its own: When someone of Herzog’s stature makes a divisive and arguably navel-gazing film, what’s the best way to approach such a volatile force of nature? Do you accept it and go along for the ride, because you’re already so invested in his career and you like his style, even when it might not be good? Or do you love him and believe in his genius enough to demand better?

We’ll leave that to you.