The feminist bookstore where Portlandia films is beefing with the show 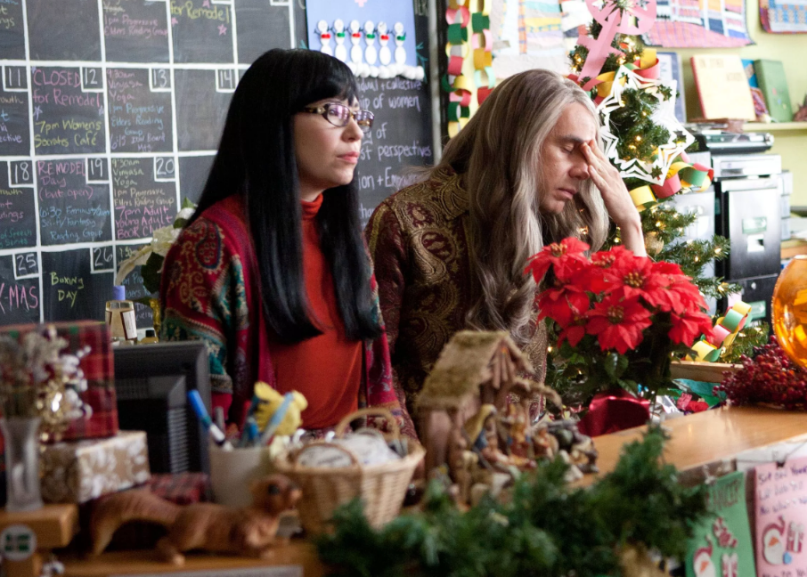 You might not know In Other Words by name, but you’ve almost definitely seen the inside of it. Fred Armisen and Carrie Brownstein regularly use the store as the set for a Portlandia sketch lampooning a pair of second-wave feminists running the Women & Women First bookstore. But it looks like the relationship between the sketch show and the boutique has soured, as they’ve hung a “Fuck Portlandia!” sign in their window and shared a statement explaining why they are no longer working with the show.

In Other Words posted the statement to their website, explaining that the rift grew out of a recent shoot that left the store trashed. However, that’s far from the only reason they dislike the show. The statement is a laundry list of familiar complaints about the show from inaccurate representation of race and trans individuals to its part in fueling gentrification.

Check out the whole statement below:

Several months ago the In Other Words community agreed to discontinue our relationship with Portlandia. This was a direct response to a particular egregious filming of the show in our space which saw our store left a mess, our staff mistreated, our neighbors forced to close and lose business for a day without warning, and our repeated attempts to obtain accountability or resolution dismissed. It was also a direct response to a show which is in every way diametrically opposed to our politics and the vision of society we’re organizing to realize. A show which has had a net negative effect on our neighborhood and the city of Portland as a whole. Shortly after this decision was made, a volunteer placed the Fuck Portlandia sign in our window.

Being on Portlandia Doesn’t Make Us Money

We are paid a small flat fee per episode filmed at in Other Words. This fee does not cover the profits lost by our having to remain closed for filming. It also does not cover the additional business lost by our neighbors who at times also have to remain closed for filming. The additional exposure we have received from our time on Portlandia does not provide financial or political support of any kind: tourists and fans of the show come to our door to stand outside, take selfies, and then leave. The vast majority of them don’t come inside.

The Women and Women First segments that are filmed at In Other Words are trans-antagonistic and trans-misogynist and have only become more offensive as the show goes on. ‘LOL Fred Armisen in a wig and a dress’ is a deeply shitty joke whose sole punchline throws trans femmes under the bus by holding up their gender presentation for mockery and ridicule. In a world where trans femmes — particularly Black trans women — are being brutalized and murdered on a regular basis for simply daring to exist, dude in a dress jokes are lazy, reactionary, and actively harmful. They’re also just straight up not funny.

Also: there are no Black people on Portlandia. There are a tiny number of people of color on Portlandia. Portland is white but it’s not that damn white. It’s also a city with a deeply entrenched history of racism and white supremacy. In Other Words is in the heart of a historically Black neighborhood in Northeast Portland. We have Black Lives Matter written on our window. Black Lives Matter Portland meets regularly in our space. But as more and more Black folks and people of color have become involved at In Other Words, Portlandia has only gotten steadfastly more white. Oh and also: the last time the show filmed in our space, the production crew asked to us to remove the Black Lives Matter sign on our window. We refused.

Portlandia is fueling mass displacement in Portland. Fred and Carrie are on billboards and realtors have gleefully begun using Portlandia’s popularity and insipid humor (‘put a bird on it!’) to make displacing the communities that made Portland a great place in the first place something twee and whimsical for the incoming technocrat hordes.

The current board, staff, and volunteers were not involved in the decision, made six years ago, to allow Portlandia to film at In Other Words. We stand behind our collective decision to discontinue our relationship with the show. And we fucking love the sign.

Support our stance? Donate today so we can continue to serve as a hub for Portland’s social justice community – any amount helps! And if you’re interested in volunteering, please contact us at scheduling@inotherwords.org.