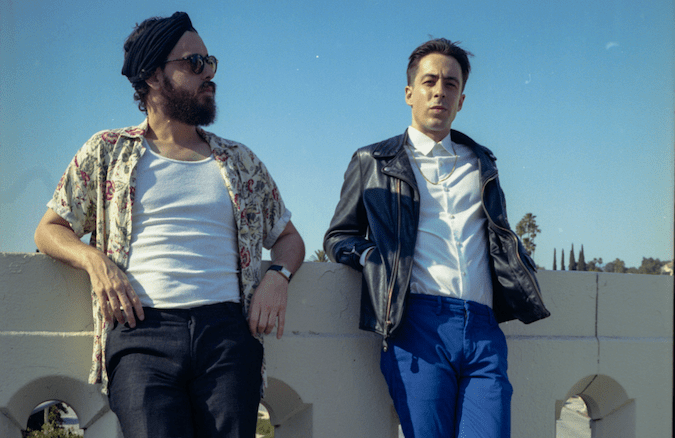 Darren Weiss and Danny Presant of PAPA have seen more of the entertainment industry’s beauty and ugliness in just the last five years than most bands will probably see in a lifetime. They’ve risen as well as fallen, earned acclaim and encountered setbacks, and navigated between the disparate worlds of DIY and the major leagues. But the turbulence of being working musicians hasn’t kept them from staying the course. PAPA are soon to return with the follow-up to their 2013 debut record, Tender Madness. It’s titled Kick at the Dust and is out in stores on September 16th via Hit City USA.

“Seems to me that if you work hard enough for security and comfort in this life, you might get it. But after you do, you’ll probably look around, cross eyed with boredom and say, ‘What for?,’” Weiss previously told Noisey of the band’s approach to the album and their career in general. “When a shark stops swimming forward it’s dead. Same goes for artists. And I ain’t no shark.”

There’s an inherent drive in singles like the charging “Hold On”, the swagger-lined “Rain More”, and the anthemic lead offering “Comfort’s a Killer”. Other cuts, such as “What Good is the Night” and “Jesus Take Me To Your Avalanche”, are the result of quirkier, not-so-vanilla indie rock experimentation — something PAPA not only were drawn to as a result of their career thus far, but felt was necessary to the existence of the band.

“This isn’t some album we wanted to make,” Weiss explains to Consequence of Sound. “This is the album we had to make. We drove our enterprise further away from that weary and squeaky base of ‘indie’ or ‘alternative’ rock to drill the refuse off our sound and philosophy until we came up for air with something truly alternative, and independent. This record is for those who see our current pop culture, and feel a rush of excitement and lust when they know they don’t belong.”

Ahead of its official release date, CoS is streaming Kick at the Dust in its entirety below. Take a listen; pre-order it here.

Kick at the Dust Artwork:

Also, catch the band on their upcoming US fall tour.