Here’s your first look at The Rock’s Jumanji reboot 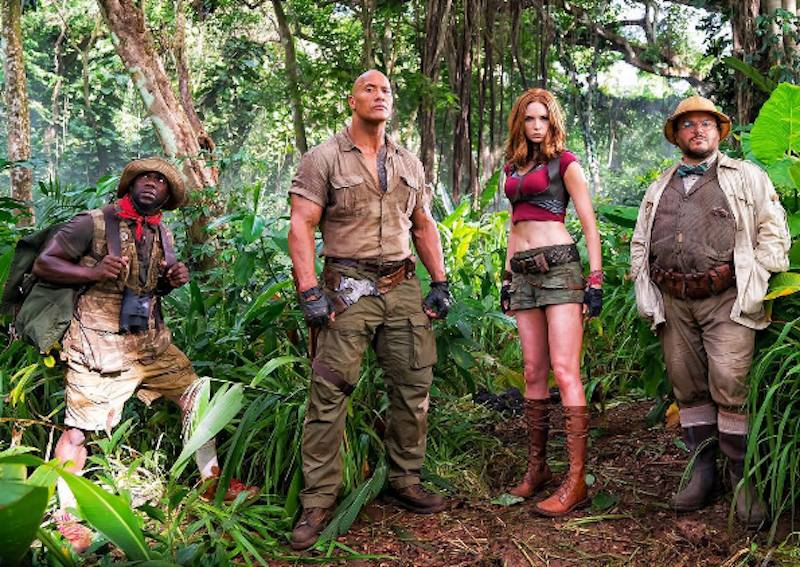 Kevin Hart (Moose Finbar) dropped the first image, which sees him dressed in the sort of typical wilderness tourist getup that lets you know he’ll be his usual bumbling, fish-out-of-water self in this one. Next to him is Dwayne “The Rock” Johnson striking an imposing form as Dr. Smolder Bravestone in an outfit he probably already had in his personal wardrobe since he wears it in so many films. All the way to the right is portly Jack Black as Professor Shelly Oberon, complete with pith helmet. And in the middle there is the newest cast member, Karen Gillan, whose Ruby Roundhouse character seems a little inappropriately dressed considering the setting.

Somehow a midriff baring top and short shorts don’t strike me as the kind of thing you want to be wearing when bushwhacking through a jungle. “Oh stop complaining,” you say. “She looks hot and it doesn’t need any more explanation than that.” Well, Gillan’s co-star The Rock disagrees.

When posting a picture of his own (same scene, slightly different poses), Johnson noted, “Her jungle wardrobe will make sense when you know the plot. Trust me.”

One running theory is that this version of Jumanji will see these characters pulled out of a video game as opposed to the classic board game of the original. If that’s the case, the ridiculous name and over-sexualized outfit of Ruby Roundhouse would at least make sense; that is how women are often depicted in video games, after all.

That might sound like a little too much smart, wry commentary for a family adventure starring Black, Hart, and Johnson, but we’ll when the film hits theaters on July 28th, 2017.

Wait a minute, didn’t the original have kids in it?