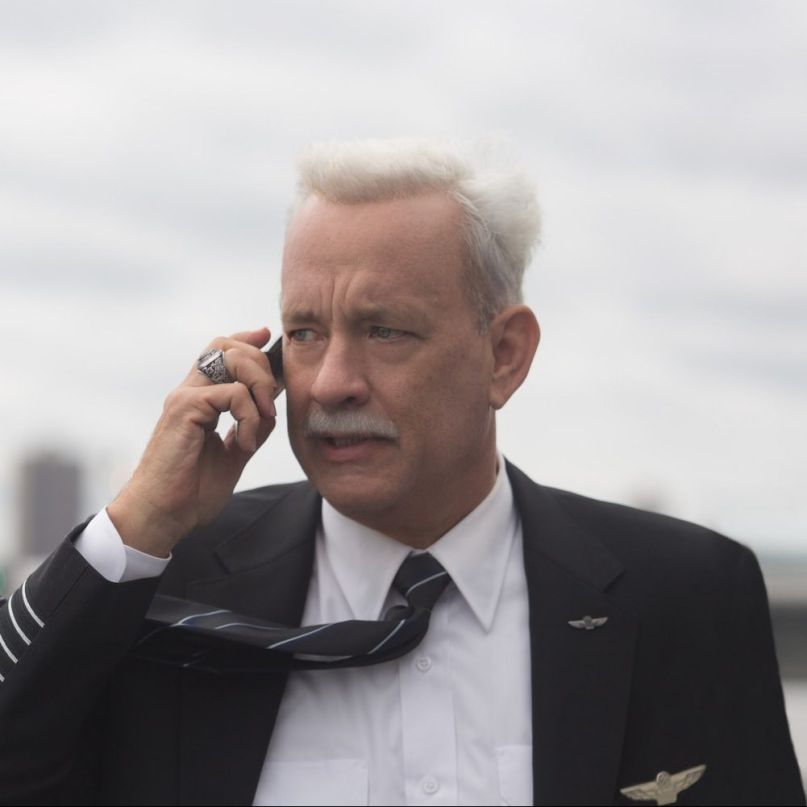 For as impressive as the story of Captain Chesley “Sully” Sullenberger is, it was long inevitable that if his exploits should ever come to film, the story would have to tell more than just the story of Sullenberger’s heroic airline landing in the Hudson River. Because, for as truly impressive as Sully’s split-second heroics were on that day, the incident itself only lasted for 208 seconds. Both engines on US Airways Flight 1549 were destroyed by birds immediately after takeoff, to the extent where a safe landing even back at the airport would not be possible, and so the captain decided to make an emergency water landing on a cold, early-January day to save himself and the 154 other passengers on board.

So, back to the question: the plane landing is a magnificent thing, and that nobody aboard was seriously hurt is even more so. But what further story is there for Sully to tell? Based on Sullenberger’s book Highest Duty, the film expands on the pilot’s emotional turmoil in the immediate wake of the landing, the stern investigations into whether he even made the right choices at all, and above all, modern society’s seeming inability to simply appreciate an act of everyday heroism. Some of those modes work less effectively than others, but Clint Eastwood directs with an assurance that’s been missing from some of his recent work, and it’s to the film’s benefit.

It’s curious that Eastwood would choose this of all projects to explore the possibilities of IMAX cameras, though. Despite that enlarged format being a major selling point of the film, Sully is often a more intimate affair when that US Airways flight isn’t landing (not crashing, as Sullenberger insists), several times over. After a brief, horrifying opening flash of what might have been if Sullenberger failed to make a snap decision in the cockpit, Sully emerges as a character study about a man forced to hinge his entire life’s work on a three-minute choice. Tom Hanks, as Sully, brings the kind of staunch understatement to the character that’s become the actor’s later-era trademark. Playing his age to an unusually conspicuous degree, the actor retains a small amount of his genial charm but shades Sully’s time alone with a weary exhaustion made all the more resonant by the constant noise around him.

And that noise is everywhere. If Sully’s primary thesis focuses on the disputes which immediately followed Sully’s landing, its secondary one is about just how damn hard it is for somebody to perform an act of daily decency in our world. It’s in these moments that Sully starts to feel a little bit like an old man yelling at a cloud at times; the emotional punch of watching Sully struggle through the onset signs of PTSD while becoming an overnight celebrity in our invasive popular culture is effective, but at times Eastwood seems to be less concerned with Sully’s anguish than with making a bitter point about how disrespectful it was to ever so much as question the pilot’s actions. The film treats a standard panel inquisition into Sully’s decision-making process with sarcasm that borders on outright contempt, and even takes a beat to have Sully and his co-pilot Jeff Skiles (Aaron Eckhart) regard the airline’s offer for counseling with a scornful chuckle: “What are they going to tell us?”

The more affecting moments in Sully come when the film puts aside its posturing and really examines what it is to be heroic in a cynical age. It’s an oddly appropriate theme given how many tentpole summer movies asked variations on that same question this year, and in Sully, it’s just part of how the world works. A group of boisterous locals in a bar name a drink after Sully, but they don’t understand his burdens. People surround his hotel and his home with flashbulbs, in a recurrent motif of cacophonous visual and aural noise as invasive as it is standard. In Eastwood’s view, we couldn’t even take ten minutes to be amazed that a pilot used his 40 years of professional experience to accomplish something that, statistically speaking, should’ve gotten everyone on board killed. We had to taint it with panels and discussion and a lack of regard for the simple efficacy of practiced, long-term experience.

But statistics and projections and simulations don’t matter if a miracle happens anyway, and that’s the point Eastwood is most zealous about driving home. While there’s a humorous streak that helps break up the protracted sequences of Sully jogging through New York in an attempt to find his true center, or the repeated flashbacks and dream sequences that only serve to muddle the film’s already haphazard storytelling, the humor is less funny than exhausted. Sully often carries itself with the exasperation of its protagonist, who solidly informs a research panel of supposed aviation experts that “Engineers are not pilots. They’re wrong.” Sully calls home to his wife Lorraine (Laura Linney), and she reminds him that he still has bills to pay, a startup company to maintain, and a life that doesn’t care if he’s Sully Sullenberger now.

As simulations show that Sullenberger could have landed the plane at several other airstrips, and liability becomes a possible issue, Sully becomes as much about the bureaucratic nightmare of investigation as it is the event itself. And in these two opposites, the best and worst faces of Sully as a film emerge. The crash sequence is an excellent, muted setpiece on the filmmaker’s part, at least at first. Because it was such a quick process in reality, Eastwood frames the oncoming landing with an encroaching dread, lingering on Hanks as he works through his progressions and comes to the realization of what he’s actually going to have to do. It’s the actor’s finest work in the film, and it’s juxtaposed with the terrors of the main cabin; with tight, quickly cut coverage of different passengers living out what they think their last moments will be as the flight attendants repeat a barked mantra of “heads down, stay down,” Eastwood effectively illustrates just how close all involved really were to a horrifying death.

Then the film chooses to repeat it three different times, from different perspectives. And another two times, in simulations. And then twice more in other simulations. There’s even a horrific pair of dream sequences involving plane crashes. For those counting at home, that’s at least seven plane crashes or fake plane crashes during Sully. And between the frequent repetition of that and other motifs, and a climactic board interview that occupies most of the film’s third act, Sully feels like an exceedingly long film even at 95 minutes. Eastwood’s direction is confident, but the film is still narratively predicated on a three-minute incident, and not all of he and screenwriter Todd Komarnicki’s best efforts can obscure that after a point. If the film does ultimately arrive at the point that over-analysis can sometimes be detrimental to the spirit of human courage and hope, Sully is still just a different kind of over-analysis.

But if there’s an emotional core to the film that sometimes gets lost in Eastwood’s prolonged exploration of media scrutiny (seriously, Katie Couric shows up at one point to shame Sully in a dream, and it’s around this point that Eastwood’s seeming contempt for modern media starts to affect the film), it can be found in Hanks’ quiet, effective performance. After all, he’s trying to be a hero in a scared world. At times the film subtly explores how the simple image of a plane careening into New York City means something very different to the city’s residents, and until Komarnicki drops all nuance and has a character acknowledge the parallel aloud, it’s an affecting place-setter for Sully’s world. Sully is just trying to do a decent thing, and more to the point, to believe that he did when the default approach is skepticism. It’s a weight to carry, especially knowing that you might not have even done the right thing in the first place. And Hanks conveys this weight in every lingering glance and tired late-night phone call with a mix of gravitas and light humor that few other actors could convincingly execute.

However, Sully could have very easily been a film about a tragic plane crash, and Eastwood invites audiences to simply stop and consider the miracle for a while longer. He frequently takes a heavy hand in doing so, to be sure, but at the heart of Sully is something that runs deeper than society or modern politics. It’s the idea that maybe, just maybe, a good thing can happen and there’s no seedy underbelly to it. That might not necessarily be the most compelling narrative thrust for a film, but in the hot-take era in which we live, it feels uncommonly optimistic.