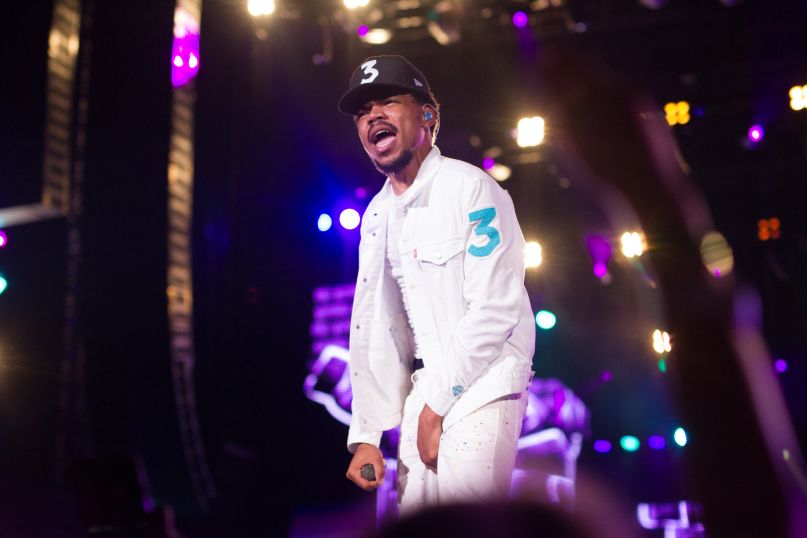 Chance the Rapper is one of Chicago’s greatest musical blessings. If his numerous love letters to the city, the open mics he organizes for the youth, and his social media campaign to fight gun violence over last year’s Memorial Day Weekend haven’t been enough, consider Magnificent Coloring Day. The rapper’s festival at US Cellular Field, home of his beloved Chicago White Sox, was the first of its kind on the South Side of Chicago – an area historically excluded from the city’s entertainment industry, despite all its contributions to art and culture – and a day stacked with the kind of A-list entertainment established fests have trouble procuring. Lil Uzi Vert, Alicia Keys, and Skrillex on the same bill? Only phone calls from Chano could have made that happen.

The festival began at 1:00 p.m. with Francis and the Lights, a more recent collaborator of Chance’s and someone who’s clearly been taking notes – for instance, the group dropped its debut, guest-heavy album, Farewell Starlite, yesterday for free. To the festivalgoers trickling in and the folks in GA bracing for hours of the blazing sun, Francis Starlite, with his erratic dancing and eccentric falsetto, must have been a hilarious distraction. Some probably wondered what he was doing there, but then Chance appeared onstage to dance along to “Friends” (whose choreography you can learn from the accompanying music video) before zipping away. Everyone clamored for Chano, and everything made sense again.

The schedule for Magnificent Coloring Day hadn’t been very well publicized prior to the event itself, and was clearly subject to change: Young Thug didn’t show up at all, and Lil Uzi Vert appeared half an hour late. But when the 22-year-old Philadelphia rapper did leap onstage, he wasted no time at all, running through tracks from his two mixtapes out this year, The Perfect LUV Tape and Lil Uzi Vert Vs. The World. He led massive sing-alongs to “Do What I Want” and “Top”, jumped into the crowd on the second song, and rapped a verse of “7am” a capella — you know, in case you’d forgotten his chops – all after a three-day long shrooms bender.

With Jeffrey mysteriously missing, Tyler, The Creator was up next, ribbing the crowd for failing to clap in time and for playing along with angry “Fuck that shit” chants. Ever the antagonist, Tyler also had some choice words for the “fucking idiot” who thought it would be a good idea to sell ‘restricted view’ tickets at The Cell, proving himself also a man of the people. “Go to Camp Flog Gnaw,” he joked, later running backstage to greet the beleaguered showgoers who could hardly see the stage.

When the sound abruptly went out during Tyler’s set, shunting him offstage, I chalked it up to another blip in the festival programming. When “Father Stretch My Hands Pt. 1” came over the PA, we assumed The Life of Pablo track was just one of the many that’d been filling the dead air in between sets. But Kanye Omari West himself walked out onstage, and the stadium lost its collective shit. You’ve probably seen the video by now: Screaming fans rushed the stage. People in seated sections jumped down onto portapotties to get on the field (at least one person was carted off on a stretcher afterwards). People stood on the dugouts for a better view. It was hardly five p.m. and it seemed the day had peaked.

With a show to play in Nashville just hours later, Ye wasn’t about to waste his time with long-winded speeches. He jumped from Pablo to his verse on ScHoolBoy Q’s “THat Part”, tracking backwards to “All Day”, “Black Skinhead”, and “Can’t Tell Me Nothing”. Then came a dive back into classic Kanye with a triple hit of “All Falls Down”, “Gold Digger”, and “Touch the Sky”. “All Falls Down”, with its shout-outs to Chi-town, the South Side, and the West Side, was particularly emotional.

In recent years, Kanye has grown somewhat estranged from Chicago and wasn’t due back in his hometown for another two weeks, but he returned against all odds to surprise everyone at a landmark event for the South Side. When he closed his set with “Ultralight Beam”, he introduced Chance like a chuffed dad. “I’m so proud of this young man for putting this on,” he told the crowd, smiling widely. When it came time for Chano’s verse, Kanye literally gave him the stage, jumping off to say hi to the crowd, and when the song ended, they hugged and walked backstage, Chance’s arm slung around Ye. One felt like a spiritual baton had been passed. It was a beautiful sight.

John Legend was up next, and although it was refreshing to hear a full band take advantage of the stage’s sonics and very cool for Common to pop over for “Glory” from his own festival, Aahh! Fest (which was kicking off its first day in Union Park), Legend ended up providing more of a breather between two of the three peaks of Magnificent Coloring Day. For he was followed by 2Chainz and Lil Wayne, who were billed together as Collegrove, but for their hour-long set, the two often sprung apart to perform their biggest hits. 2Chainz was happy to play hype man for Weezy, whom he attempted to introduce: “Without him I wouldn’t be here. Without him a lot of these niggas wouldn’t be here. Hell, he needs no introduction.”

The way Wayne swaggered onstage, it was hard to forget that he’s been rapping since before many members of the audience were even alive and inspired nearly every rapper who’s making waves today. The stadium shook for “A Milli”, “Lollipop”, and “Sky’s the Limit”, and those unfamiliar with the classics were treated to numerous, albeit brief, covers of Drake, Juicy J, and Chris Brown. Before Collegrove left, Wayne made sure we took three things from their performance: “One, we ain’t shit without the man up above,” he said, his finger jabbing towards the heavens. “Two, I ain’t shit without you, ya dig? And three – I ain’t shit without you. Ya dig?” The crowd lapped it up.

After Collegrove, Alicia Keys, Magnificent Coloring Day’s only female performer – something the festival should amend for future editions – strode onstage, stood at her piano, and knocked out a 45-minute set. Keys has chosen to explore a mellower side of herself on her recent material, but between “If I Ain’t Got You”, “Karma”, and “Fallin’”, one wondered how we could have forgotten her powerful voice. Although it was somewhat regrettable that she – like John Legend – had been effectively relegated to providing lighter entertainment between the more combustible acts, their presence on the bill was an opportunity for the younger crowd to watch some acts they probably wouldn’t have actively sought out on their own.

And finally, it was time to enter Chance the Rapper’s magnificent, multicolor universe. Given Chance’s sprawling musical network in Chicago and a festival lineup practically created to facilitate guest appearances, I expected plenty of collaborators bounding on and offstage. But when Chance zipped into “Blessings” halfway through opener “Angels” with Saba nowhere in sight, I quickly realized that wouldn’t be the case. Instead, Chance’s Magnificent Coloring Day performance was to be centered on him and his “path,” a mysterious journey Chance negotiated onstage with a lion cartoon character from his childhood (who can also be heard as a cheerleader of sorts throughout Coloring Book).

“You have to go back, big fella,” the lion would affectionately urge him, and cajoled by this shifu of sorts, Chano bounced between new material and old, between his own songs and tracks he’d only featured on. After massive sing-alongs to “Pusha Man” and “Cocoa Butter Kisses”, Chance sat at a piano with a flapper-like cartoon character who represented his old flame in “Same Drugs”. A similar character sat in an armchair to do “D.R.A.M. Sings Special” as Chance ‘napped’ on a bed in the corner. As Chance and the Social Experiment – his backing band for the set – performed “Sunday Candy”, pink hearts crawled across the backing screens and columns.

Chance’s performance felt of a piece with the sweet theatrics of the “Sunday Candy” video – it was a musical with a loose (and sometimes incoherent) narrative that was unashamedly indulgent and childlike, a fitting and pleasantly surprising end to a festival called Magnificent Coloring Day. It was a reminder that Chance the Rapper might be a father, a successful independent recording artist, and a hero of the city, but he’s also 23 years old: young enough to plot out one of the biggest sets of his life with puppets of imaginary cartoon characters and also young enough to believe in purer things. Chance played almost every track off Coloring Book, but the song of the night might have very well been “Blessings (Reprise)”, not least because of his message to the audience:

Was Chance preaching? I’m not sure. His call to look to the future, to better and more beautiful things, felt like it transcended religion. There was a strange godliness permeating all of Magnificent Coloring Day, from Kanye’s gospel of “Ultralight Beam” to Weezy giving first praise to the heavens. The unsaid religiosity of it all could have probably made an atheist’s skin crawl, but for the faithful at Magnificent Coloring Day – decked out in Chance gear, wearing Black Lives Matter shirts, draped in the jerseys of various Chicago teams – that kind of skepticism was nowhere to be found. “The people’s champ must be everything the people can’t be,” Chance rapped on “Blessings (Reprise)”. Chicago is lucky that it’s fallen to Lil Chano from 79th to embody its city. He is more than worthy of that title.