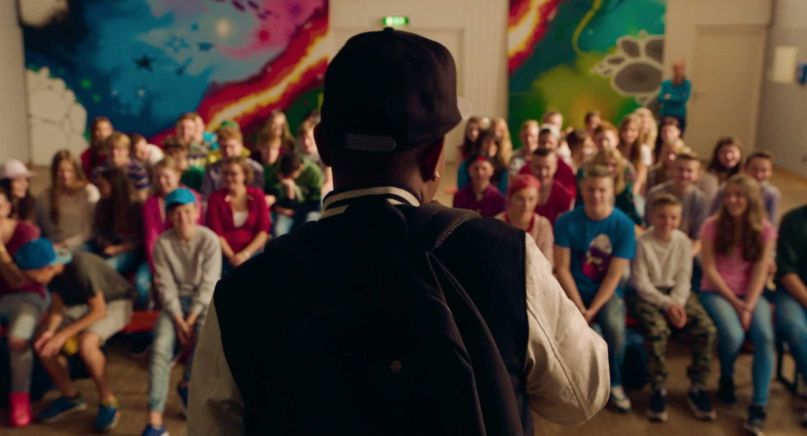 It’s hard enough being a kid, let alone when you have to do it in a place where you have virtually nobody around to whom you can relate. That’s universal, but it also couldn’t be more literal for Morris (newcomer Markees Christmas). When his dad, Curtis (Craig Robinson), got a job as an assistant coach for a small-market German soccer team, they moved to Heidelberg without the 13-year-old having the slightest say, as these things usually tend to go. Morris misses New York, he misses the music and the culture and the people. More to the point, he misses the familiarity. And he misses the days when he wasn’t so radically different from everyone else for reasons wholly beyond his control.

Chad Hartigan’s film follows Morris through various misadventures over the course of an interminable summer, as Curtis tries to make ends meet and Morris just tries to find somewhere in Heidelberg where he might actually belong. He attempts to join a program at a youth center, only to be met with scorn and derision because he’s a) shy, b) slightly heavier-set, c) a hip-hop head in a country that would appear to be completely bereft of them, and d) a young black man. That last point hangs over Morris from America, but Hartigan makes the wise decision to not drive the concept home with a Degrassi-style message-of-the-week bludgeon, but instead as a natural outgrowth of his outsider status. It’s just one more thing that sets him apart, and he’s hardly in need of any more of those, especially when they lead to ignorant youth program leaders asking Morris and Morris alone if a joint found outside belongs to him.

Morris finds kinship with his dedicated father and with Inka (Carla Juri), the graduate student tutoring Morris in German, but hardly with anybody his own age. That is, until he meets Katrin (Lina Keller), the sort of preternaturally intelligent and beautiful teenage girl that tends to show up in this kind of film. Katrin is at the point in life where she’s rebelling for the sake of rebellion; she smokes all manner of inhalables, she parties with older kids, she has a DJ boyfriend with a motorcycle, and before long she’s holding the threat of a black boyfriend over her intolerant mother’s head.

Their courtship forms the spine of Morris from America, which Hartigan’s screenplay observes as a loose progression of key moments in Morris’ passage into something at least vaguely resembling adulthood. It’s that looseness that suits the film best, given that virtually every individual component of its structure and storytelling will be eminently familiar to anybody who’s ever seen a coming-of-age film about a young man attempting to find his place in the world when the unfamiliarity of constant humiliation and young lust take over. And it’s the moments when it breaks that mold that Morris is at its best; the relationship between Morris and Katrin feels honest enough thanks to the charming performances on hand, though the film is admittedly yet another in a long lineage of teen-friendly movies that sexualize their underage objects of desire in the same way as their protagonists to a disconcerting extent.

The best moments involve the interplay between Christmas and Robinson as a pair of outcasts in a new world, both attempting to find what might come next. For Morris, this chiefly involves writing hilariously vulgar rap verses full of completely unearned braggadocio (“You ever fuck two bitches at a time? I’m just asking,” Curtis gently pries), and for Curtis, his isolation forces him to confront the absence of his departed wife and Morris’ mother. At points the film simply observes the smaller, more innocuous moments of a coming-of-age story; much of it is framed in intimate medium shots and close-ups, and there’s a distinct kinship between the numerous wayward souls in its world that carries it along. It adds something to interactions like Inka’s overtures of concern to Curtis about the misogyny and violence of Morris’ lyrical work, or a hysterical digression involving Morris’ attempts to simulate every step in the general progression of how he thinks sex will eventually work, via a clothed pillow and Miguel’s “Pussy Is Mine”.

The smaller moments work in relief of the more rote beats, most of which land in the film’s central relationship story. There are not one but two big performances in which Morris must dig deep and prove himself (the first is aborted early in uncomfortable fashion, granted), and a number of scenes in which Morris has to wonder whether or not Katrin’s natural predilection for flirtation might mean something more or not. Predictability isn’t an inherent curse, especially as it relates to the coming-of-age genre; there’s a certain comfort to such stories that’s required for the sake of relatability. But all the same, it’s just a little too often that Morris from America feels familiar in a less beneficial way.

But it’s the film’s true grand relationship that carries it through the good and the typical alike. Christmas does fine work as the bashful Morris, capturing just enough of the internalization of that generally ignoble phase in life while exuding the kind of charm that suggests he’ll be just fine in a few years when life is generally less awful. And Robinson does career-best work as Curtis, the rare filmic father figure who’s not just around to bellow and dole out discipline. Their mutual outsider status demands a certain mutual understanding between man and younger man, and it’s not hard to imagine a different film set in the early ‘90s in which Curtis is a lot like his son. Robinson finds a nuanced balance between pathos and comedy, cracking wise even as he’s trying to keep a lot of ships from sinking at once for the sake of not making his son’s life any harder than it already is, or his own. In its more successful moments, Morris from America knows this lesson well: adulthood is hard from the early passage into it and onward, and all you can do is try to make it work. Usually that means figuring out what the hell that actually means to you.