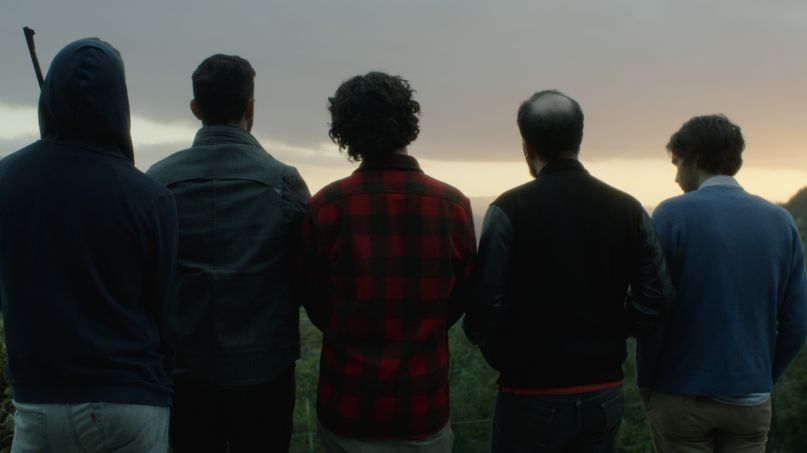 “Let’s do shots to nothing!”

Man, oh man, is the cast of Joshy great. You have some of the funniest people on the planet spending time at a remote cabin. How can anyone screw this up? Check it out: Thomas Middleditch (Silicon Valley), Adam Pally (Happy Endings), Nick Kroll (Kroll Show), Brett Gelman (Dinner with Friends…), and Jenny Slate (Obvious Child). After Joshy, you can add Alex Ross Perry to that list. Perry’s best known as a writer/director, with his most recent work, Queen of Earth, receiving rave reviews last year. Who knew he could play along with people at the top of their craft? You could make a whole other movie based on the number of cameos from people just as talented as the main ensemble.

It turns out that despite a cast this strong, you can screw it up. Dark comedy isn’t the easiest pool to swim around. Too outrageous and you end up with the very bad Very Bad Things. If it’s too dark and not funny enough, you’ve got the favorite film in Jon Stewart’s resume, Death for Smoochy. Writer/director Josh Baena (Life After Beth) bookends Joshy with dark moments, and while the first works perfectly, the second threatens to unravel everything that comes before.

Joshy (Middleditch) had a wedding engagement that came to an end. It’s been four months, and he decides he still wants to have his buddies get together with him at a cabin in the woods. Those who arrive to spend time with him include Ari (Pally), a married man who partakes in toking; Adam (Perry), straitlaced and estranged from his wife; and Eric (Kroll), the life of the party who’s determined to keep up everyone’s spirits. Joining them a bit later is Eric’s friend, Greg, who’s equally as positive. “It’s not okay to be sad!” he later screams at Joshy.

For most of Joshy’s runtime, you believe him. Despite a plot that has been done to death (boys’ weekend), the ensemble finds ways to make otherwise familiar material funny by being themselves. They don’t lose themselves in their characters — we’re just watching Brett Gelman shoot Nick Kroll in the crotch with a BB-gun as Thomas Middleditch gives the play-by-play as Harry Carey. We’re laughing when Gelman takes Alex Ross Perry’s “Monkey’s Paw” scenario literally. Perry later explains the bootstrap paradox to a room full of stoned and drunk comedians. Hilarity will naturally ensue. It’s an episode of the Comedy Bang Bang podcast come to life (I still can’t get on board with the CBB TV show, but that’s for another time).

Fans of the mumblecore movement, and more specifically Joe Swanberg’s Digging with Fire, will appreciate a cameo by the Swanberg family, whose bad vibes are driven away shortly after arriving onscreen. It’s as though Baena is saying to the audience that the movie itself doesn’t have time for that genre — that it just wants to have fun. Until it doesn’t. And when it doesn’t, it gets tricky.

It’s difficult to explain what goes wrong without giving away a crucial part of the story, but when it gets dark, it commits the cardinal sin of any drama by reaching soap-opera levels of hysteria. It’s possible Baena is trying to lump in the audience with his characters, that we’ve been avoiding the major issue alongside this group of comedy talents and adhering to Eric’s “Positive vibes, positive energy” mantra. Whether or not this is true, it’s a sloppy move that only manages to derail a good time.

Joshy has not one but two sex worker scenes. It has boys being boys on vacay. It even manages to toss in a subplot that follows a married man on the verge of cheating with another woman (Slate, who does a lot with what could have been a nothing role). Baena’s crime is that he tries to make the film something very different at the last minute and doesn’t come close to earning it. It’s a shame, because while the comedy beats are familiar, the uber-talented cast of Joshy give them a new vibe.