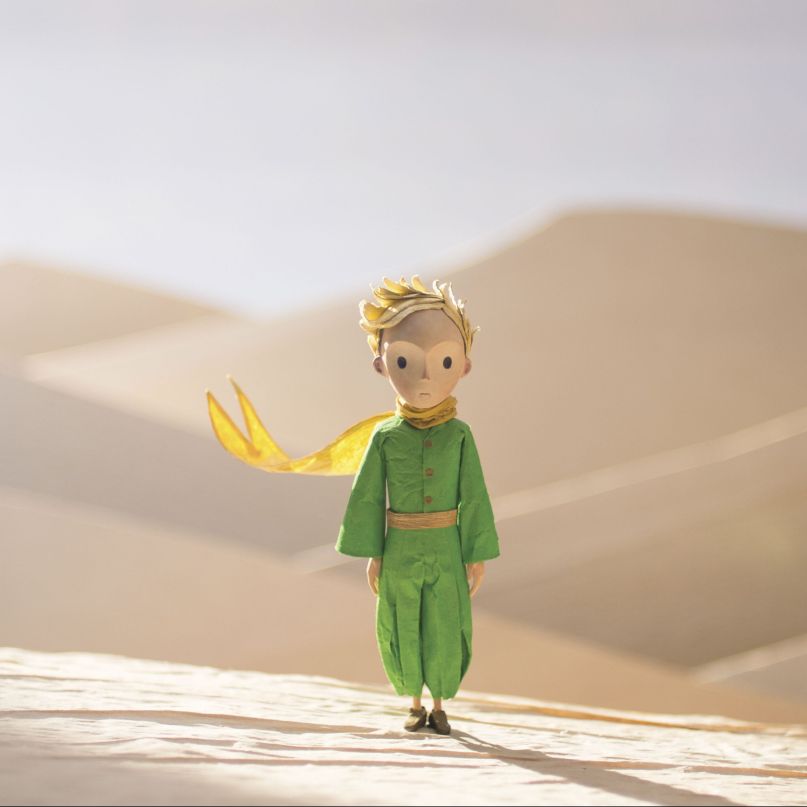 “It is only with the heart that one can see rightly,” says the Fox in Antoine de Saint-Exupéry’s The Little Prince, one of the most beloved books in the world. It’s a line that resonates within the story on many levels, as it speaks to grief, to beauty, to the things in life we value most and the things we lose. It’s also a pretty solid summation of what works, and doesn’t, about director Mark Osborne’s dazzling and frustrating adaptation of the classic story. It’s beautiful, even moving at times. And it works better if you think less about it with your head and simply enjoy it with your heart.

That’s not to say that The Little Prince, which took Osborne years to bring to the screen — at long last, via Netflix — is unintelligent. It’s a daring adaptation of a story that seems, to be frank, fairly unadaptable, though many have tried, most notably by the celebrated librettist-composer duo of Alan Jay Lerner and Frederick Loewe in the mid-’70s. That adaptation, which featured Bob Fosse and Gene Wilder among others, has its charms, but it’s nowhere near as thoughtful as the take offered by Osborne and screenwriters Irena Brignull and Bob Persichetti.

Nor is it as visually stunning, and that’s reason enough to see this film. Osborne has created a world in which the act of creation becomes a part of the way the story is told, with nearly all of Saint-Exupéry’s text coming to life in paper-based stop-motion animation that echoes the author’s own simple, evocative illustrations. They’re images ready-made for nostalgic tattoos and tea-stained prints, and the rough-yet-delicate textures of these sequences imbue each frame with the feeling that the pages have somehow scattered and taken on their truest form. It’s a lovely and fitting choice, particularly when juxtaposed with the more familiar 3D animation of the film’s framing story.

That framing story occupies much of the film’s running time, and it’s here where both the boldest strokes and the greatest stumbles can be found. The narrator of Saint-Exupéry’s tale, an unnamed Aviator (superbly voiced by Jeff Bridges) lives in the one colorful, ramshackle house on a block of uniform little boxes with uniform little cars out front. When over-preparation dooms the young protagonist, a similarly unnamed Little Girl (Mackenzie Foy), right out of the fancy school of her mother’s dreams, she and her Mother (Rachel McAdams) move into the only home in the neighborhood that means said school will be forced to accept her as a student. It happens to be right next door to that colorful, ramshackle house, and that’s where the story really begins.

It’s fitting that we encounter The Little Prince through the eyes of a child who behaves largely like a grown-up, as this child does. The Little Girl has her life regimented in 10-minute increments, all shown on a detailed life plan set up by her mother, who hints at her own past traumas when she says that since the girl has to make her way through life alone, she must be prepared. A paper airplane sent through her window changes the course of the story, and perhaps of her life, a moment that speaks to how the right book can shape a person, just when they need some shaping. Is it precious? Absolutely. But again, if one watches with the heart, it doesn’t matter one lick. Even the mind would probably be on board with the majority of this story, which deals with decidedly grown-up ideas like fear, grief, and deception with a light but determined hand. It’s only once the Aviator’s story of the Little Prince runs out of pages that things get rocky.

Even then, as the story strays even further from Saint-Exupéry’s pages, it retains its spirit. It never falters in its desire to appeal directly to the heart. But when the Little Girl encounters a crop of characters new to her — most named in the novella and played by the likes of Albert Brooks, Ricky Gervais, and an expertly cast Paul Rudd — things get rockier. When wandering into a text as deceptively simple, psychologically dense, and largely beloved as The Little Prince, any bold choice sends larger ripples, and Brignull and Persichetti make decisive choices that Saint-Exupéry does not. At the same time, they extend his larger, overarching themes to their framing story, putting the emotional oomph largely at the end of their story, thus robbing the original text of The Little Prince of much of its power. That seems like the right choice for an adaptation, but it’s hard to say that it’s effective.

Even for those well-acquainted with the original text, Osborne’s film will hold many surprises. It makes watching the film a treat, but it’s also part of what weakens the whole. Still, taken as one piece of art, as one beautiful, self-sustaining creation, this Little Prince is a thing of beauty. Flawed, yes, like a rose (Marion Cotillard) whose vanity cannot help but drive those she loves away. Overly intense, certainly, like a mother who will leave the best for her child, even at the cost of their childhood. But it’s beautiful and earnest, nonetheless. The people most infatuated and frustrated by this sumptuous piece of filmmaking will likely be the book’s most ardent devoteés, which is perhaps the best compliment one can say of an adaptation. It’s made for the fans, to be sure, but also for everyone else. And above all, it’s made with great affection, and that’s not something to be disregarded. Watch it with your heart.