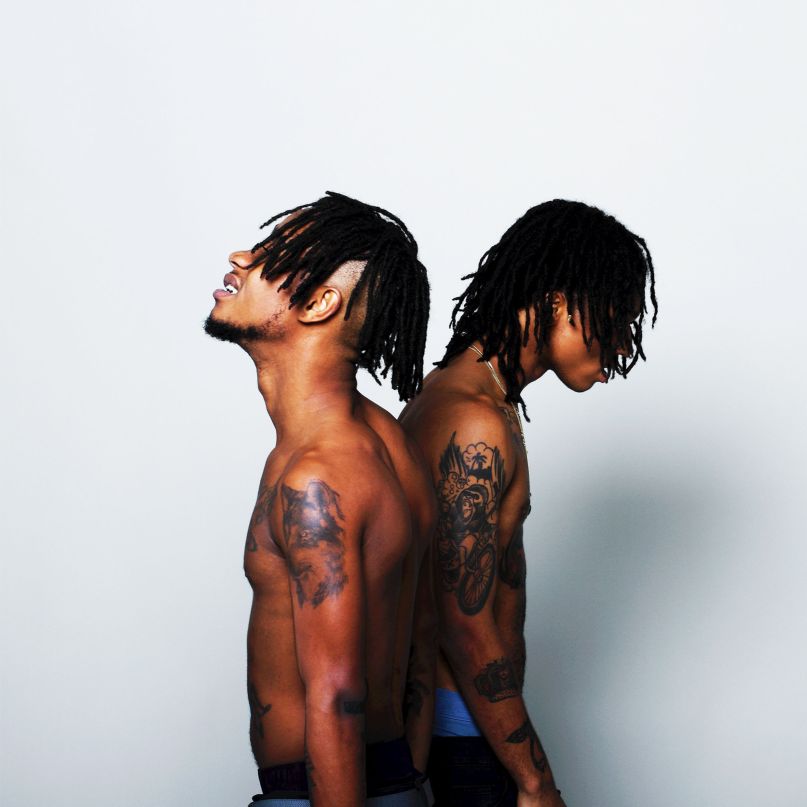 Rae Sremmurd’s SremmLife was a tremendous accomplishment not just because it had five singles reach the top 100, no small feat on its own, but because nearly every track on the record could have feasibly been released as a single. Among the songs that didn’t chart, there was the Big Sean-assisted nighttime celebration “YNO”, the lurching exuberance of “Unlock the Swag”, and the manic chiptune of “Safe Sex Pay Checks”, arguably the greatest anthem built around promoting contraceptive use of all time. Each of those was as catchy and memorable as “No Flex Zone” or “Throw Some Mo”, proving brothers Khalif “Swae Lee” Brown and Aaquil “Slim Jimmy” Brown were far from one-hit wonders. It may not have had the cohesive decadent vision of DS2 or the sociopolitical ambition of To Pimp a Butterfly, but track for track, no 2015 rap record had as high a ratio of churning out bangers as SremmLife.

Swae Lee and Slim Jimmy, at the young age of 23 and 24 respectively, spent the past decade honing their craft, making overwhelmingly positive party songs. As they explained in their Fader cover story, early on they made a conscious decision to focus on radio-friendly, upbeat rap, going as far as to purposely leave out cursing on the first songs they began to write together as teenagers growing up in Tupelo, Mississippi. It took years of writing, recording, and working long hours at factories producing mattresses before the brothers finally made their way to Atlanta, linked up with MikeWillMadeIt and became the first signees to his Ear Drummers label, from which they would take their name. Their rise from sharing a tiny apartment to headlining festivals around the world and writing the hook for songs Beyoncé played at the Super Bowl may have seemed rapid, but was the result of years of effort.

On SremmLife 2, the brothers waste no time doing what they do best. “Start a Party” kicks things off by going in hard over a harsh, lumbering MikeWillMadeIt production, one of many lurching experimental beats the producer plays with throughout. From there, they begin to deviate from their formula. The first two singles, “Look Alive” and “By Chance”, may have seemed underwhelming following up their debut’s mega-smashes, but serve as astute heralds of this record’s variations in style. The former is a futuristic romp about trying to hook up at a party, and the latter finds Swae Lee playing the role of playful host with one of the most amusing hook structures of the year. And while neither is too immediate, they both find strength in subverting expectations. Even the upbeat jams find them trying out new approaches, as “Set the Roof” finds the duo moving away from the Atlanta sound to link up with Lil Jon over a DJ Mustard beat for a song destined to obliterate clubs the rest of the summer.

Playing with different styles makes SremmLife 2 a worthwhile followup, even in its more subdued moments. “Take It Or Leave It” proves Swae Lee’s skill at romantic R&B, and “Now That I Know” is the kind of bitter kiss-off to an ex that could be an outtake on Views. The piano-led “Came a Long Way” finds Rae Sremmurd waxing poetic about their origins in a contemplative manner far removed from anything they’ve done before. The strangest yet most effective venture is deluxe edition closer “Just Like Us”, a slice of pure pop that finds the brothers crafting an inspirational anthem that sounds like Rihanna or Nicki Minaj: life-affirming feel-good without being too cheesy. It’s the moments where they try to recapture the feeling of their first record that fall flat, as “Over Here” sounds like a redux of “Unlock the Swag” and “Shake It Fast” is this record’s strip club ode that swaps out Nicki & Young Thug for Juicy J.

There’s so much to dive into with SremmLife 2, with a stellar verse from rising star Kodak Black on “Real Chill” and the odd but extremely catchy “Do Yoga” that help round it out. One song emerges as a clear highlight, the brothers enlisting Gucci Mane to help them make the best song of their career. “Black Beatles” is an answer to the question Kanye posed six years ago, a regal triumph, ambitious and exciting. Gucci adds credibility to their rise to true contenders in the Atlanta scene.

Naysayers like radio personality Ebro, whose feud with the brothers is well documented, have found much to criticize about Rae Sremmurd, essentially calling them frivolous. This criticism misses the point, as there is plenty of room for fun, upbeat music in rap, as much as there is for politically minded protest music. Both can coexist without taking away from the other, especially when its as well executed as the SremmLife series. SremmLife 2 may not pack the punch of its predecessor, but it shows that the brothers are growing musically. Far from one-note, Rae Sremmurd have the chops to sustain a long and varied run going forward.

Essential Tracks: “Black Beatles”, “By Chance”, and “Just Like Us”