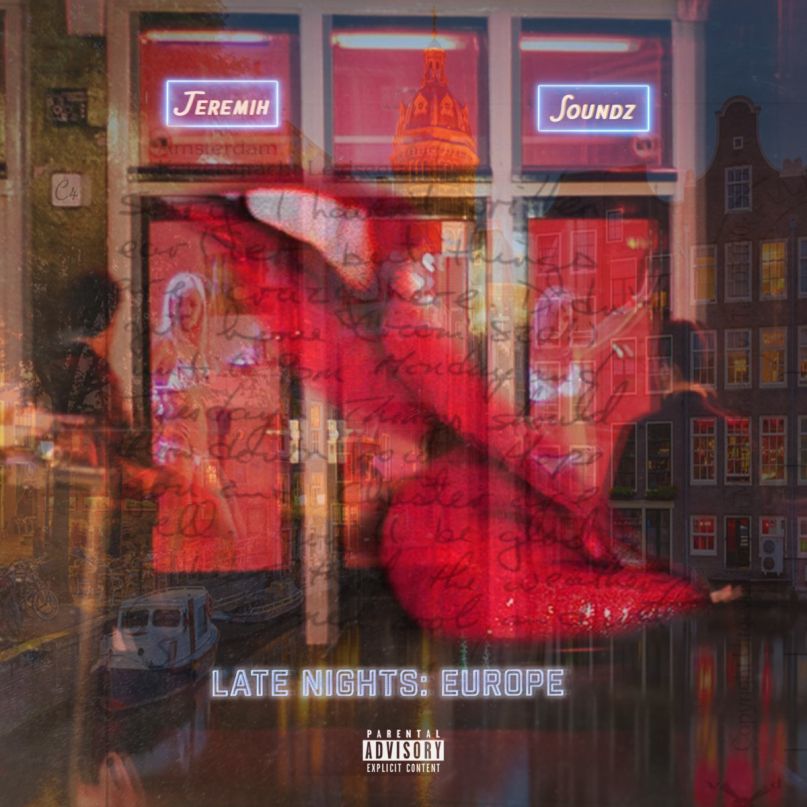 For a long time, it seemed like Jeremih would forever be on the cusp of becoming one of R&B’s A-list artists. It was a transitional period that was due to both label troubles at Def Jam and the 29-year-old Chicagoan’s own perfectionism. Last year’s Late Nights: The Album came five years after the release of his previous album, 2010’s All About You. Before The Album, most perceived Jeremih as a competent major label R&B singer (if not a particularly “interesting” one) due to songs like “Birthday Sex”, “Down on Me”, and “Don’t Tell ‘Em”. If you had been paying closer attention, you may have also noticed his increasingly experimental beat selection and production choices in recent years, evident on his beloved Late Nights with Jeremih tape and his No More EP with left-field beatmaker Shlohmo. Ultimately, it was The Album that marked Jeremih’s grand entrance into the national consciousness, boosting his reputation with critics in the process.

New mixtape Late Nights: Europe arrives as his third release with the words “late nights” in the title. In some ways, it’s a return to the feeling of Late Nights with Jeremih, another free tape where he didn’t so much aim for chart success as he sought to sustain a neon, nocturnal aesthetic from song to song. Though Late Nights: Europe’s songs drastically vary in tempo, they all feel similarly of a piece. The tape is also another full showcase of Jeremih’s vocal tricks. The way his singing glides over beats, like a puck on an air hockey table, never gets old, not to mention his numerous, partially rapped flows.

Given Jeremih’s established reputation as a hook-singer — both on his songs and other artists’ — it’s no surprise that Late Nights: Europe has a few supremely replayable moments. “Belgium (Get Down)” sounds inspired by the high-BPM electronic sub-genre juke, and Jeremih’s titular hook is as entrancing as the beat. If anyone can get away with chanting the words “Get down, lil’ mama” over and over without the phrase getting stale, it’s Jeremih. The next song, “Berlin (She Wit It)”, gets a similar amount of mileage from a simple phrase (“She wit it”), though Jeremih also switches up his delivery effortlessly, keeping the track from becoming stagnant. While those songs are among the most immediate on the tape, there’s also stuff like the slower, syrupy “Stockholm”, which proves to have an addicting atmosphere once it settles.

With the first two Late Nights releases, it was obvious that Jeremih gave serious consideration to the sequencing of the songs, giving both projects their own mood and distinct pace. With help from his go-to beatmaker Soundz, Late Nights: Europe continues that tradition. Throughout the tape, there’s an unrestrained sexual energy; the lyrics tend to be raw and graphic, though they can also be cliched at times (“How you walk with all that ass?”). Even the usually hardheaded rappers Game (“Oslo, Norway”) and G Herbo (“The Crib”) get into loverman mode for their guest verses.

Coming so quickly after The Album, it shouldn’t come as a surprise that Europe doesn’t exactly mark a major reinvention for Jeremih. Some changes to his aesthetic might be in order; it can seem like he sings about sex and nothing else. Then again, few of today’s vocalists sing about sex as joyously and convincingly as Jeremih does, so it’s hard to complain. Time will tell if he packages any of these songs as official singles, but as is, Late Nights: Europe continues the superstar run that The Album inaugurated. It brings Jeremih that much closer to realizing his full potential.

Essential Tracks: “Belgium (Get Down)”, “Berlin (She Wit It)”, and “Stockholm”