The Best Medicine: An Interview with Scott Aukerman and “Weird Al” Yankovic

The stars of Comedy Bang! Bang! talk about the show's upcoming season 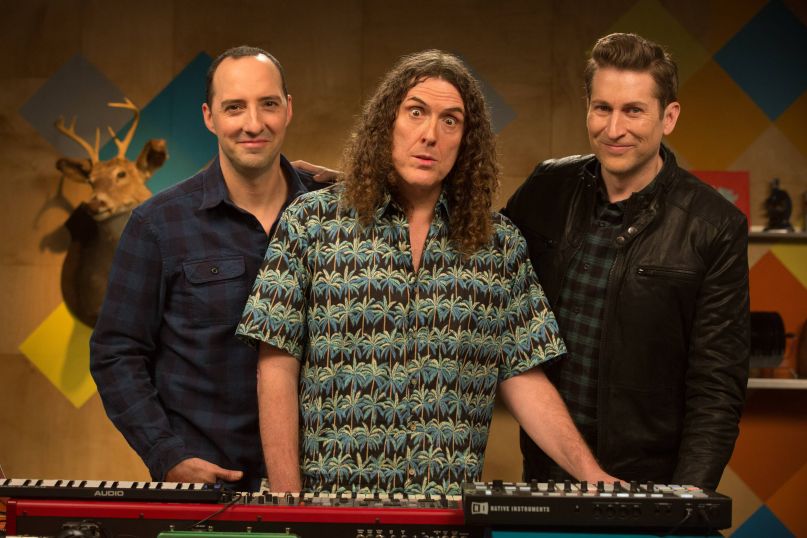 There is a place where the dead return to life, where famous celebrities and lowly janitors mingle, and where esteemed scholars and ignorant fools are equally welcome. This place is Comedy Bang! Bang!.

Both a television show on IFC and a long-running podcast,Comedy Bang! Bang! is the brainchild of Scott Aukerman. The format is simple: Aukerman welcomes guests as themselves as well as comedians in the guise of everyone from director Werner Herzog to Ho Ho the Naughty Elf (who brings knives and guns to the naughty children at Christmas each year). What makes these shows, which might otherwise be irreversibly chaotic, flourish is Aukerman himself, who brings to the platform an uncanny ability to draw out both his real guests and comics in character while gleefully sandbagging their intentions when necessary.

He’s had plenty of time to perfect his craft.

After serving as a writer and performer on HBO’s Mr. Show, Aukerman first debuted Comedy Bang! Bang! (then Comedy Death-Ray) at M Bar in Los Angeles in 2002. The live version, which was akin to a variety show, ran for 10 years after a move to the nearby Upright Citizen’s Brigade Theatre and featured plenty of appearances from the likes of Louis C.K., Aziz Ansari, Maria Bamford, and countless others.

TheComedy Bang! Bang! podcast started in 2009 and has blossomed into a premiere platform for both rising talent and frequent favorites like Paul F. Tompkins and Andy Daly. Since 2012, Aukerman has also expanded his brand to a television show of the same name, a wonderfully surreal program that takes the format of him speaking to guests on a couch and twists it with unique editing, bizarre story lines, and absurd banter.

The incomparable Reggie Watts had left his station as Scott’s sidekick after three seasons to take a position on James Corden’s The Late Late Show, but Season 4 replacement Kid Cudi informed Aukerman he would not be returning with production set to begin shortly. With his options limited, he went after the best man for the job.

“We were just in such a bind that it was like a Hail Mary pass for me,” says Aukerman. “I was just like, you know what would solve all of this? If ‘Weird Al’ Yankovic did the show.”

“I’d just finished my five-month tour, and literally the morning after I got home, I opened up my laptop and read my email,” recalls Yankovic. “The first email is from Aukerman saying, ‘Hey, how would you like to be the new bandleader on Comedy Bang! Bang!?’ It’s not every day that I get offered a chance to co-star in one of my all-time favorite shows, so it took about a nanosecond of thought before I said, ‘Of course!’”

Aukerman has made no secret of his affinity for the godfather of parody songs. “Weird Al” has guested on the Comedy Bang! Bang! podcast numerous times, as well as appearing in each season of the television show to date. The two speak of each other with a warm affinity, and the chemistry they share gives plenty of reason to expect the new season of the show to be one of its strongest to date. For Yankovic, taking the role gave him something he says he hadn’t had in quite a while: a regular job.

“It’s not part of my normal existence to have to get up at six o’clock in the morning and drive somewhere every single day,” says Yankovic, “but it was a joy to do that, because every single time I came to the set, I would be in the company of these amazing people and doing ridiculous things.”

In Aukerman’s case, he’s always getting up early, if he ever sleeps at all. In addition to his podcast and television show, he’s also one of the founders of Earwolf, a titan in comedy podcasting that features other popular shows like Never Not Funny, How Did This Get Made?, and the show co-hosted by his wife, Kulap Vilaysack, Who Charted? Along with Zach Galifianakis, he is the creator of Between Two Ferns, the Funny or Die program that in 2014 featured an episode with President Barack Obama. He also wrote for Chris Rock on the last Academy Awards telecast and now produces several programs for NBC’s new streaming comedy platform, Seeso.

“I really had to get better at my time management and figuring out how to make the podcast still good while I was doing the TV show,” says Aukerman, “which is something that I think I’ve figured out how to do. I’ve been really pleased with the fact that a lot of people think the last couple of years have been some of the strongest years in the podcast’s history while I’ve been working this insane amount of hours on the TV show.”

One challenge that Aukerman has been forced to face several times in the last couple of years is figuring out how to be funny when the world looks acutely dark. He recalls being on set at Village Video during Season 5’s production when he learned that Prince, one of his favorite musical artists, had suddenly passed away.

“Prince, it just was so out of the blue,” he says. “It definitely was something that I couldn’t believe, but at the same time, there I am at work, and we’ve got to get to work that day. I’m sort of able to compartmentalize it a little bit and just kind of go, ‘Well, this is crazy, and I’m bummed, but we have a show to shoot.’”

“Weird Al,” who for many years lobbied Prince’s camp for permission to do a parody of one of his songs, says he is sorry he’ll now never have that chance.

“It’s very sad, because that’s a ship that has now passed. I’ve always held a hope that someday we would meet, let bygones be bygones, and maybe he’d even let me do a parody at some point, but that’s not ever going to happen now.”

A much more immediate loss was the tragic death of Harris Wittels, a writer for Parks and Recreation and one of the most beloved guests in Comedy Bang! Bang! history. When Wittels passed away from an overdose in February of 2015, the comedy world went into mourning. Aukerman, who was a close friend to Wittels and even had a separate podcast with him – Analyze Phish, in which Wittels attempted to convince Aukerman that Phish was a good band – says the late comic’s presence still looms large in his life.

“It’s so interesting,” says Aukerman, “because still to this day, I’ll be trying to figure out who to have on a show, and it’ll pop in my head every once in a while, Oh, I could get Harris, and then I realize, You know that he’s not around anymore.”

Aukerman recalls taping what would ultimately be the final episode of the Analyze Phish podcast with Wittels and that his co-host seemed “put off” when the recording was over. Aukerman says he worried that perhaps he’d done too many bits or simply not taken things seriously enough for Wittels’ liking. Eventually, Wittels asked to listen to the episode, and upon hearing it back, immediately saw the comedic value and asked that it be released right away.

It’s an anecdote indicative of how intuitively and wholly Wittels embraced good comedy, even at his own expense.

“I think he was always just looking for the truthful representation of stuff, rather than putting on any kind of a front,” says Aukerman, “and that was really refreshing.”

While the loss of Wittels was a tragedy not just for fans of comedy but for those who knew and loved him, the response of Comedy Bang! Bang! to his passing is proof positive of why it is such an important, beloved institution for so many. Aukerman made the difficult choice to release the final podcast featuring Wittels — the fourth installment of the “Farts and Procreation” saga that featured the late comic along with Parks and Recreation star Adam Scott and former writer Chelsea Peretti — four days after Wittels’ death.

In a touching intro to the episode, Aukerman notes that he was inclined to shelve the episode, but was reminded of something Wittels had told him shortly before his death: “I just think … motherfuckers want to laugh.” He was right. The comments on the episode’s page and at dedicated fan forums on sites like reddit showed what a cathartic help having one last hour with Wittels was for fans who, in spite of having never met the man, found themselves truly grieving.

It makes what Aukerman does – on his podcast, with his television show, and on the 18-city live tour he just concluded – so special. There certainly doesn’t need to be despair in your life to enjoy any of his many projects, but when there is, they are there, ready to help make the day a little bit brighter.

“Sometimes when the world is especially unfunny, it actually helps you to be funny,” says Aukerman. “It’s like, ‘Hey, this is all depressing, let’s go be silly.’ I think the good thing about Comedy Bang! Bang! is it’s really just silly and dumb. It’s a lot of fun to do, but I think it helps people as well when their personal lives get shittier or when the world looks kind of shitty. It’s definitely something that I think helps out rather than is a chore.”