All heart. Some farts. 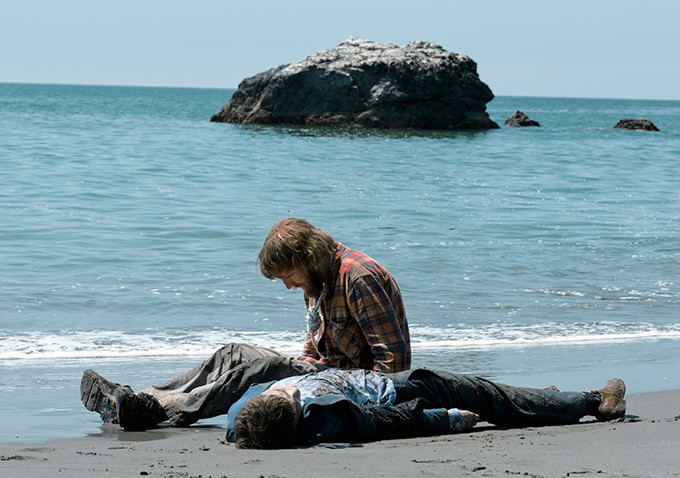 Yes. This is the movie where Daniel Radcliffe plays a farting corpse. Can we get past this, please? There is a lot more to be found in the sands, ocean, and forests that make up the debut feature film by Daniels (Daniel Kwan and Daniel Scheinert). Soul searching is a theme throughout. Imaginative editing. Outrageous special effects. Standout performances from Radcliffe and Paul Dano. A wonderful, original idea for what a movie score could be, and…

Okay. Let’s get back to the farting corpse.

A screening of Swiss Army Man at Sundance from earlier this week saw several walkouts early on. Presumably the notion of a fart joke was too low-brow for these folks, but we can’t begrudge them their reasons for bailing in the opening minutes. Over the decades, the fart joke has been claimed by the non-creative creators of straight-to-VOD fare or Madea’s Family Reunion. The fart is often the last resort at making an audience laugh. You’d have to go as far back as Blazing Saddles to recall a scene where farting was laugh-out-loud funny for stretches or remembered above all others in a positive way.

Swiss Army Man takes back the idea of the fart joke and everything it is capable of. If you can’t find the potential for humor in Paul Dano powering through ocean waves astride the back of Daniel Radcliffe, whose corpse uses its post-mortem flatulence as an engine, then this isn’t going to be the movie for you. There is triumph in this moment, and while it happens early on, the movie doesn’t peak here. The farts continue, but so do the committed performances and direction, even if Swiss Army Man gets lost in its own crazy plot near the end.

Hank (Dano) is at the end of his rope. Literally. He’s about to hang himself after being stranded on a desert island somewhere in the Pacific. Just as he’s about to kick the bucket, he discovers a body (Radcliffe, somehow never better) has washed up on the shore. He decides to live and finds newfound comfort with a corpse he has named “Manny”. He’s the Wilson to his Tom Hanks, but as the movie marches on in its own weird, delightful way, Hank discovers he can use Manny for many functions.

His farts light fires. He regurgitates water as a human faucet. His mouth can fire seeds just as effectively as firing bullets. One could say he’s like a Swiss Army Man (ha-ha, I’ve earned it). Under the wrong hands, this could come off as one-note, but the energy supplied by The Daniels is infectious. Pretty soon, Manny begins … to talk. He’s still as immobile as Terry Kiser’s corpse in Weekend at Bernie’s, but unlike that character, Manny has a personality. He’s slowly reintroduced to the real world as Hank carries him and drags him through the mysterious forest in his quest to get home.

Frenzied, kinetic filmmaking is hit or miss, but The Daniels are showcasing their talents as opposed to showing off. Hank recreates moments from his life with surrounding trash and forestry, and it’s during these moments where Swiss Army Man becomes something other than the “farting corpse” movie. The score is almost entirely composed of music that Hank and Manny create in their own minds, leading to a lot of a capella scoring the action (“Pop-popcorn, pop-popcorn” is one particular earworm). We get slowed-down renditions of “Cotton-Eyed Joe”. The filmmakers were even able to use John Williams’ Jurassic Park score for important scenes. There are shadow puppets. There is a lot of heart in Swiss Army Man, sans manipulation.

Dano is as likeable as he has ever been, having the time of his life as the lost-in-many-ways Hank. The movie is mostly a two-hander, so the importance of his chemistry with Radcliffe was essential to this movie’s success. Radcliffe does so much by doing so little. Not sure if I mentioned this earlier, but he sells a compassionate character that is not-dead-but-not-quite-alive in addition to farting (a lot). While we’re invested in these two from a comedic standpoint, we’re just as invested in them battling through their own respective inner demons. This isn’t American Pie Presents: Band Camp.

It trips up in the final 10 minutes or so when deliberate and chaotic storytelling loses itself to its subplot of unrequited love — a piece that works for most of the story that surrounds a picture of a beautiful woman (Mary Elizabeth Winstead) on Hank’s phone. Some stories are better left unresolved, and The Daniels felt the need to take us all the way to the unfocused end with it. It doesn’t do much to undercut what comes before in Swiss Army Man: a tale of friendship, overcoming self-doubt, the need for others, wild imagination, and, of course, a farting corpse.