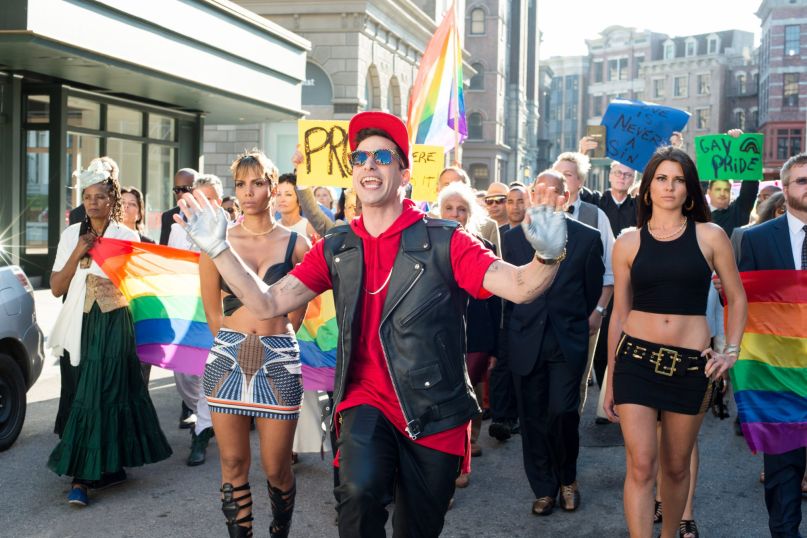 Popstar: Never Stop Never Stopping, the latest from The Lonely Island (Saturday Night Live’s Andy Samberg, Jorma Taccone, and Akiva Schaffer) is a send-up of modern pop and music documentaries, specifically in the vein of Justin Bieber’s Never Say Never, with notes of Macklemore’s earnestness. A lot of fandom went into this, but Popstar is relentless to the point where it eventually becomes plodding. Lacking the invention of past shorts or films like MacGruber or Hot Rod, the Lonely Island give audiences the kind of follow-up that shows mild signs of a slump.

Conner4Real. That’s the name, and the brand, of Samberg’s pop sensation. Like the bastard child of Vanilla Ice and a 17-year-old boy’s dream journal, Conner is like the star of every mockumentary: wickedly unaware. Connquest is the new album, and Conner knows it’s gonna be huge. It has over 100 producers for 17 tracks, and as a promotion, Conner’s music will be plugged into every home appliance in America in the privacy-diminishing vein of U2’s Songs of Innocence. Conner’s latest single? “Equal Rights,” an anthem that totally supports gay marriage and is also decidedly homophobic, as Conner repeatedly declares “I’m not gay!”

The struggle immediately becomes all too real. Conner’s appliance gambit results in mass technophobia (Obama calls the singer a “dumbfuck”), his album barely moves a few thousand copies, and Conner faces scorching reviews (although The Onion calls it a “triumph,” which Conner is pleased as punch about).

Formerly part of a Beastie Boys-esque trio, with his DJ Owen (Taccone) and lyricist Lawrence (Schaffer), Conner is now experiencing growing pains. He wants to be a Bey, but is acting like a Bieber. Owen has become a prop in Conner’s pricey live shows, forced to wear a Daft Punk helmet that makes War of the Worlds sounds. Lawrence is isolated and living out west. Conner hogs the spotlight, and brings whatever weirdness he can come up with into it. Pet turtles, ninja swords, killer bees, an opening act named Hunter the Hungry (Chris Redd), and more occupy his setlist. But it’s never enough. Conner eventually wallows in tank-topped, tattooed opulence and excess. Is there redemption for Conner’s white rapper soul? Did anyone beliebe Bieber when he was “Sorry”?

Popstar is high energy and in-the-know. The concept is spot-on, and one gets the sense that Samberg, Schaffer, and Taccone (writing, directing, and starring together) really love what they’re lampooning as they strut onstage with absurdist clothes and props and a parade of cameos. Musical excess is nothing new – sex, drugs, and rock n’ roll will never go out of style – but Popstar has a high awareness of the industry landscape in 2016. This comedy is all about its references, with occasional lapses into the bizarre and perverse.

Every character allusion and TMZ/MTV/E! Entertainment moment reads just a little left of center. Penile flubs on stage. Artists like Nas and Arcade Fire likening Conner’s music to epiphanies in talking-head interviews. Publicity stunts with live wolves gone awry. All of it lands as almost too true to life. And Popstar brings giggles, up to a point. But its jokes rely heavily on familiarity, to mixed and at times exhausting ends.

A good cameo is hard to execute well. Neil deGrasse Tyson shouting his name for a laugh in Zoolander No. 2? Barely a joke. Justin Timberlake as Conner’s sycophantic chef? Goofy, even charming. A nonstop parade of brand names singing Conner’s praise? Well, the star carnival that was 1985’s “We Are the World” was fun for a minute full of friendly faces, sure. Referential humor works best when the familiar is called upon, and then remixed. The Timberlake bit is among the most effective, along with the more surreal elements of Conner’s lifestyle (Conner keeps a short guy on payroll to make the singer feel tall), but the allusions to concertgoing and the film’s insistence on rolling out star after star begins to read like an overdone inside joke after a while.

Eventually the references grow tiresome, and worse, predictable. At this point in pop culture, everyone knows the Behind the Music beats. RZA literally summarizes Popstar mid-film, along with many other music films: “The higher you get, the harder you fall. Ask any coconut.” Just because Popstar is self-aware doesn’t always mean it’s incredibly funny. What distinguishes Samberg’s creation? More glitz and a better guest list? Spinal Tap, It’s All Gone Pete Tong, CB4, Penelope Spheeris’ Decline of the Western Civilization docs: they commit to mockery. Popstar begins with mockery, but then starts to feel like it secretly never wants to leave its scene.

Popstar makes a feature-length film out of what could have been a 45-minute Comedy Central special, or roughly 28 hit-or-miss SNL short films. Even at 87 minutes, the luster wears off the film’s joke after a while. Perhaps Conner should have called for curtains after getting Ringo Starr to say, “Doink-de-doink.”

Note: There’s a real penis in this movie, for a purposely overlong gag. It presents itself unexpectedly, and boldly. It not only made this critic cackle like a goon, but happy to see something resembling equity in nudity and willingness to exploit the male form, even for a joke. That’s worth something, you know.