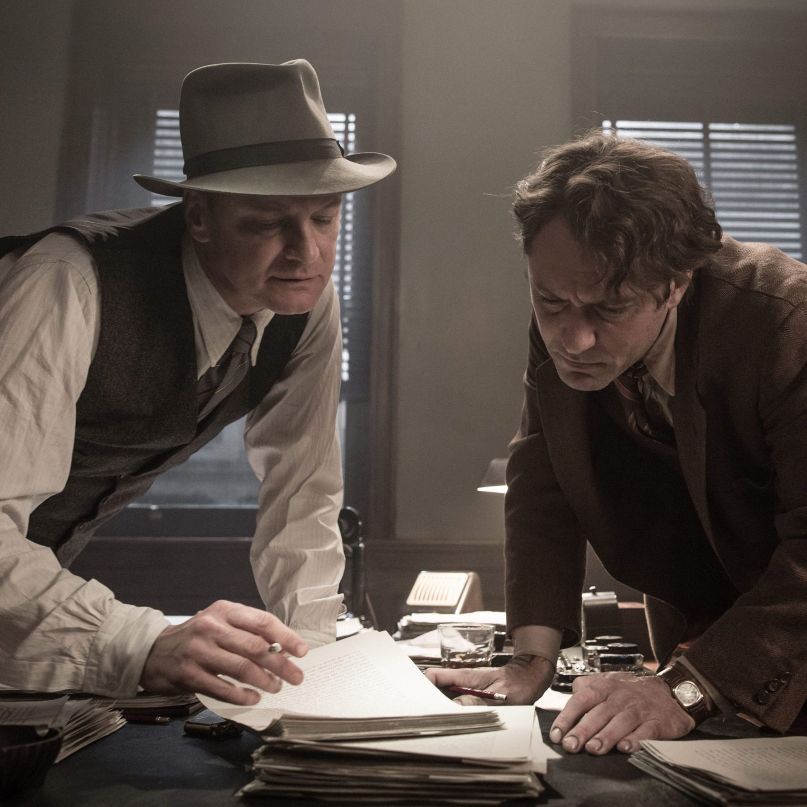 Genius, to its credit, is a film that celebrates one of the more unsung relationships commonly involved in the creative process: the one between editor and writer. However, the reason that relationship often goes unsung is that, to be honest, it’s not a particularly interesting one. Genius is about the relationship between famed Scribner’s literary editor Maxwell Perkins (Colin Firth) and Thomas Wolfe (Jude Law), and this is assumedly meant to lend the film its emotional gravity, but then Genius goes and breaks one of the key tenets of the editorial process: it makes assumptions early and often, largely about how consequential its events seem to be.

The film begins in 1929, in a New York that’s remarkably bustling during the Great Depression outside of a few images of food lines that largely serve as background dressing for fervent walk-and-talk chats between Perkins and Wolfe. In Genius’ view, their meeting was kismet; Wolfe’s manuscript for what would eventually become Look Homeward, Angel (a name reached after a series of debates about Wolfe’s working title, O Lost) was shopped all over town, with Scribner’s being a last-ditch effort and the finicky, detailed Perkins an unlikely man for the task of paring down Wolfe’s long-winded prose to its most essential stretches.

Genius frames the writer-editor relationship as a mixture of shouting matches and meet-cute spats, periodically interrupted by reminders that Wolfe and Perkins had lives outside of one another. In Perkins’ case, his obligations at the publisher extend beyond just Wolfe’s work; he was also working with Ernest Hemingway (Dominic West, brash and charismatic in brief) and F. Scott Fitzgerald (Guy Pearce, destitute and forlorn) as well during this era. He also struggles to reconcile the depth of his work with Wolfe with his five daughters and long-suffering wife Louise (Laura Linney), whose tolerance for Max’s endless nights in the city paring away at Wolfe’s novels starts to diminish.

And then there’s the matter of Wolfe’s lover Aline Bernstein (Nicole Kidman), whose theatre design work keeps her and Wolfe’s years-long affair funded while he disappears for long stretches. If much of Genius treats creativity as a romantic period piece, the scenes involving Aline swing the film into melodramatic histrionics that are treated as so tangential that they struggle to leave any lasting impression. (At one point Aline pulls a gun on Max and Thomas, and at no point afterward does it have any seeming effect on any of the character relationships, which could also be said for many of the film’s incidents.) Genius draws heavily on the recognition of its places and especially its people; it’s a film that lectures about the importance of its historical recreations as it unfolds, without connecting with its real-life figures in any more thoughtful way.

Firth and Law make for agreeable enough foils, even if Law’s Carolina accent varies in quality from scene to scene. There’s a snap to their scenes together that comes the closest to capturing the sense of wonder that Genius works double-time to mine from a story that often feels more like an interesting cultural curiosity than a relationship in need of a feature-length exploration. Law’s generally manic, tic-heavy performance is offset by Firth’s characteristic deadpan, and it keeps the film watchable even as it begins to feel repetitive after a time. (There are many, many montages that chiefly involve the two arguing fervently over spread pieces of paper.)

But while Genius aims to comment on the inherent tragedy of the obsessive creative mind, Wolfe’s zeal for writing coming less from passion than from a kind of avoidant, compulsive madness, it seems uninterested in anything not related to its central duo. Firth returns home so infrequently that Linney’s performance amounts to an extended cameo with little impact on the main story, and Kidman’s read on Aline rarely extends beyond bitter jealousy. While isolated moments in the film work admirably revive the simplistic joys of riding on old-fashioned trains and undisturbed conversations about art, Genius functions more as hero worship for unassuming (if talented and intelligent) figures.

Genius capably argues that some of Wolfe’s most iconic work existed because of Perkins’ firm hand, even if that hand may have eventually driven the brusque, temperamental author away until his untimely passing at age 38 of tuberculosis. (The tortured writer’s death, if ever there was one.) But the film ultimately reveals little about the emotional lives of either man; for its drawn parallels between Perkins’ longtime desire for a son and Wolfe’s emotional neediness, that deeper relationship feels more like a plot point than a more meaningful consideration of the intimacy of artistic collaboration. Genius is indeed about famously intelligent people, but its ambitions don’t go much farther than that.