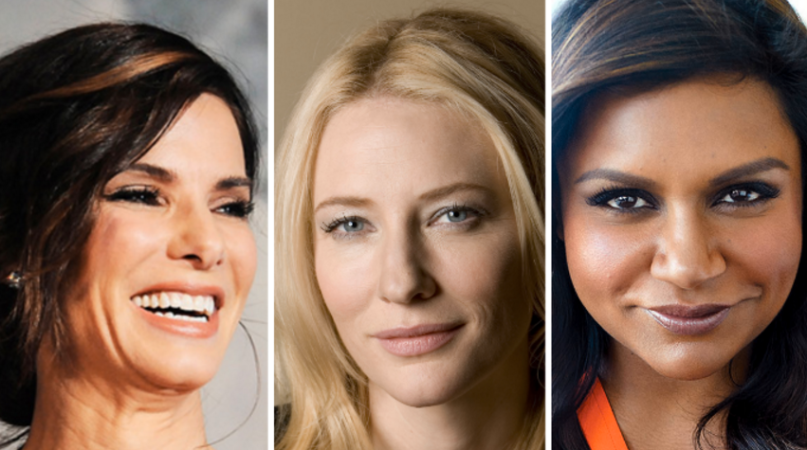 Earlier this year we got word of Warner Bros.’s plans to reboot Ocean’s 11 with a female-led cast. Hunger Games writer and director Gary Ross has been tagged to helm the project, working off a script penned by Queen and Country screenwriter Olivia Milch.

Sandra Bullock was the first A-lister to sign up for the cast. Now, Showbiz411’s Roger Friedman brings word of three others: Cate Blanchett, Mindy Kaling, and Helena Bonham Carter. If you’re counting, there’s three Academy Award wins and 10 nominations among them.

Sadly, Friedman adds that Jennifer Lawrence has pulled out of the project due to scheduling conflicts.

Production on the film, which carries Ocean’s Ocho as its working title, is scheduled to begin filming in New York early next year. it’s rumored that the film will be a continuation of the original trilogy with Bullock playing the ex-con sister of George Clooney’s Danny Ocean. The prize in question? A necklace from the Met Ball.

Ocean’s 11 director Steven Soderbergh and George Clooney both serve as producers on the project.

Update: In an interview with SlashFilm, Ross said the film is officially titled Ocean’s Eight. He described the tone and style as a “continuation” of the previous three films in the franchise.

“I think it’s a pretty similar tone. You know, Steven Soderbergh and I are incredibly close friends, and we would not have done this if we weren’t. I don’t think he would’ve wanted anyone to do it if we weren’t. This is very much an extension and a continuation. He’s a producer on the movie. In one way or another, this has been a 20-year conversation between Steven and I, collaborating in ways the whole world doesn’t know about: I helped him on the previous Ocean’s Eleven films; he shot second unit on The Hunger Games; I’ve done ADR lines for him; and he reads all my scripts. It’s a very long, ongoing collaboration. This, I think, is a very seamless process. We’re different filmmakers, obviously, so there will be those differences, but one of the things I’m drawn to is the amazing tone Steven was able to create, and we discuss that a lot. We discuss the cinema a lot, the shooting style, the rhythm, the editing style, and the music. We discuss it all. I’m in no way trying to reinvent the tone, and I’m thrilled and honored to be extending it. It’s really fun to work with.”