Catalonian teens continue to evolve with a righteous fury 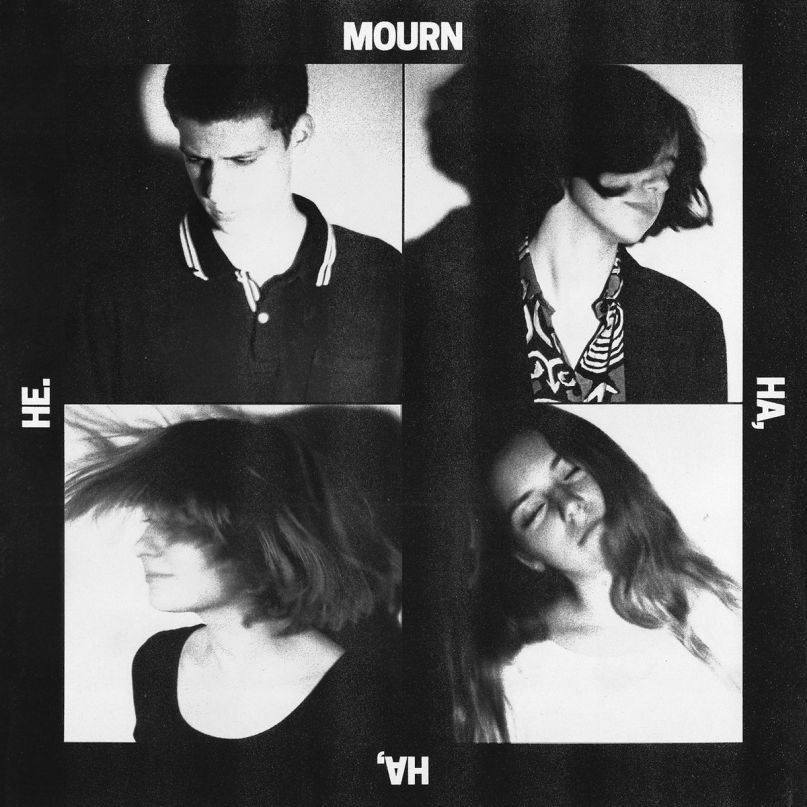 Catalonian quartet Mourn aren’t the cool kids in school; they’re the cool version of the kids sitting in the back of the class. The kids who wear their band shirts with absolute pride, who make clever references with voracious appetite for more, who crack jokes that would be darkly funny if you were lucky enough to be listening. It’s all there from their early press photos in which the teenagers look straight into the camera, as if daring you to question a cool bunch of frustrated youths for wearing a shirt bearing the name of one of the most stereotypical groups for frustrated youth. They doubled down, stylizing the cover of their debut album like The Ramones in color, font, and style, if not composition. They made listeners stare their influences in the eye and then marvel at how well they approximated The Ramones, Nirvana, and the like while also adding their own personal angst to the fire.

Sophomore record Ha, Ha, He. follows just under a year and a half after the release of Mourn, but in true hyper-energized teen fashion, even that wasn’t quick enough for them. About six months ago, the band announced on their Facebook that they’d finished another album but couldn’t release it due to constraints from their Spanish label, Sones. But that sort of rebellious nature should be expected from a quartet whose members are between 16 and 19. However, the rubbery, jazzy bass and counterpointing rhythms on “Storyteller”, the William Blake-indebted literally laughing fit of “Irrational Friend”, and the meticulously crafted push-and-pull of “Gertrudis Get Through This” range far beyond what might be expected from teens in a rock band.

That maturity was apparent on Mourn, the ferocity of their songs and clarity of their influences tempered by flexible, considered instrumentation and self-aware lyrics. While not massive leaps away from that record, the songs on Ha, Ha, He. are at least solid steps, an astonishing fact considering the rapid release. This record, like its predecessor, has its share of throat-shredding rock-outs, but it makes time for more spacious arrangements as well. After the explosive one-two punch of “Flee” and “Evil Dead” set the album off to the races with the feeling of a zombie apocalypse (“Feast on your soul,” goes the chorus to the latter, an excellent song prime for a metal cover), the album sinks into a more contemplative tone. “Brother Brother” and “Howard” sacrifice some of their performative venom for more nuanced aggression.

However, Mourn consistently seethed with a need to be heard, particularly Jazz Rodríguez Bueno and Carla Pérez Vas’ vocals, even on their changes of pace. While their advances in songwriting produce thoughtful, more intricately colored results, they’re still working on refining the vocal approach to fit against these structures and their raw guitars. One track that exceeds in its experimentation is closer “Fry Me”, the sole song to exceed the three-minute mark, stretched to include a bass-driven groove and a strident finale.

As with most people their age, Mourn are rapidly evolving and yet fueled by a fervent core of its own insistently unique voice. Also like most teenagers, there are some growing pains in the conflict between those two halves. As they continue to consume more and more, open up their palette, and expand their frame of reference, their musicianship and songwriting only get stronger. But matching that with a cohesive, consistent album will be a challenge. With Ha, Ha, He., Mourn suggest that they’re more than capable of working their way through to that end, and putting the whole struggle on display with a righteous fury.

Essential Tracks: “Gertrudis Get Through This”, “Evil Dead”, and “Fry Me”