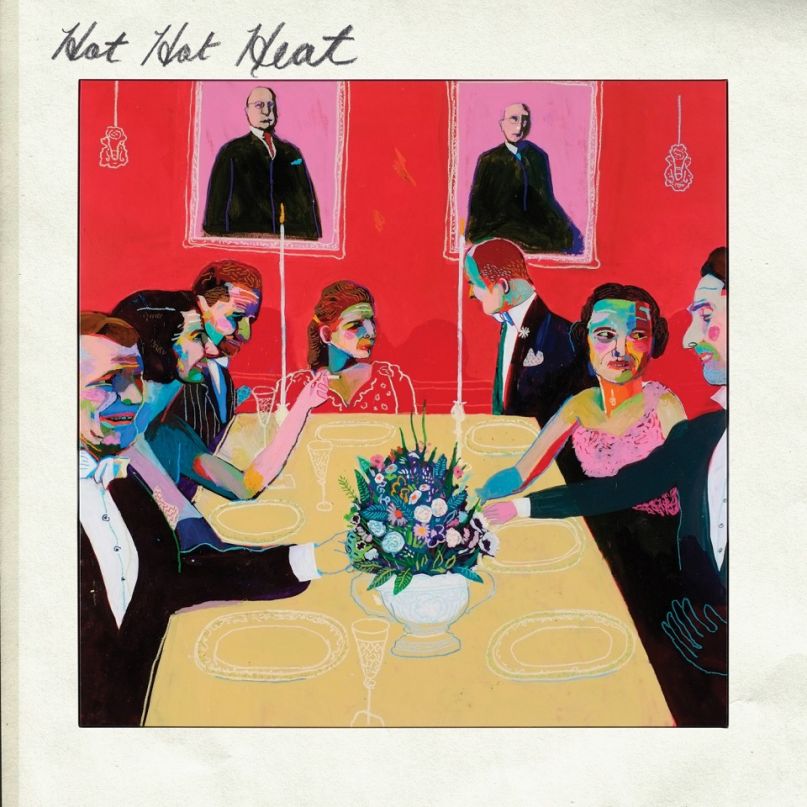 For the past couple of weeks, whenever a friend would ask what I was listening to and I replied the new Hot Hot Heat album, an eerily similar exchange would follow. “Hot Hot Heat has a new album? I didn’t realize that they were still around,” they would say. “This is their last one,” I’d reply. “Oh.”

Every time. Confusion, then apathy. That felt weird, yet also kind of expected. These friends were the same people who had loved their 2002 debut LP, Make Up the Breakdown, the kind of people with which the Canadian outfit’s songs really resonated. That album had been an integral part of their, and my own, high school or college experience, ­­particularly the runaway hit single, “Bandages”. It was a staple of dance parties, one of the songs everyone knew the words to. But the band’s sophomore effort, 2005’s Elevator, failed to make that same kind of artistic impact. Whether their leap from Sub Pop to a major label (Sire/Reprise) was to blame for the album’s uninspired, safe sound was debatable; regardless, we all sort of forgot about them, myself included.

Another equally unremarkable album followed, and then the band was back to the minor leagues for 2010’s Future Breeds, which is actually, at times, quite good. The electronics-heavy album was the band’s strangest, and easily their best since their debut, full of off-kilter, art ­pop songs. And though many of the tunes crack under the pressure of its self-imposed experimentalism, there are a number that are really great. But the fans who had lost track of the band never heard them. The only reason I know about them now is that I went back and gave it a spin to inform my listening of their self­-titled goodbye letter.

On their fifth and final album, the band eschews the experimentation of Future Sounds entirely, once more reaching for the highs of their first big hit record, the poppy, hook-driven dance punk that made them famous. The resulting record is catchy, but ultimately falls as flat as all their other attempts to recreate the magic of that first release, unable to capture the imagination, energy, and urgency of Make Up the Breakdown. That’s been the band’s struggle ever since they blew up so early. It’s not that they’re a bad band — ­­they’re clearly pretty talented, dedicated guys­­. They just seem to have written all their best songs at the very beginning of their career.

On the single and lead­off track “Kid Who Stays in the Picture”, vocalist Steve Bays sounds exhausted, and his band lags with him, plucking their strings and moseying along in an almost workmanlike fashion. And on they trod, through the rest of the album, going through the motions, dotting their i’s and crossing their t’s on all the important dance punk markers. But nothing has the frenetic edge of “Naked in the City Again” or “Talk to Me, Dance With Me” that makes you want to get up and dance, screaming the lyrics along.

Songs like “Bobby Joan Sex Tape” and “Magnitude” are bright spots­­, the former a group-clapping Matt & Kim-­esque number and the latter a groovy downtempo disco ballad. ­But the rest fail to make much of an impression. The album’s best song, somewhat humorously, is the sardonically ­titled “Comeback of the Century”, which gets the closest the band has ever come to their clever, sing-along selves from 14 years prior. The paired keyboard and guitar sear their melodies into your brain as Bays hollers through megaphonic filters with loose and delightful aplomb. Coming late in the album, the song gallops to a halt with just two last tracks left, the almost too tellingly ­named “Sad Sad Situation” and “The Memory’s Here”. In these final moments, it’s as though the band is knowingly soundtracking their own funeral, writing songs for the Broadway musical based on their career. Unfortunately though, neither of the tracks is really that interesting or memorable, and the record touted as “the sort of final album you’d expect from the band” ends up delivering on that promise in all the wrong ways. It truly is the final album we’d expect, but not because of some return to their exciting, ebullient roots. Rather it’s what we’ve come to expect: spotty, soft, sometimes great, but more often rote and lifeless — a final stanza worthy of T.S. Eliot, no bang, just a whimper.