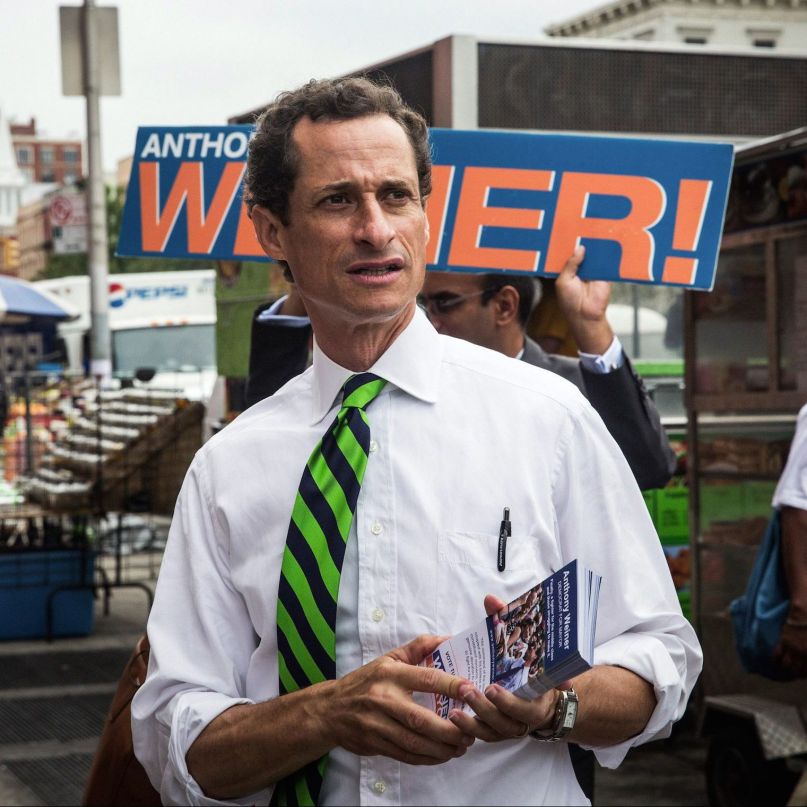 It doesn’t take long for Weiner to get you on the side of its subject. Just minutes in, filmmakers Josh Kriegman and Elyse Steinberg offer up the viral 2010 footage of former New York congressman Anthony Weiner, where on the House floor he viciously rebuked Republicans who voted against an act that sought to provide aid for 9/11 first responders. Weiner’s performance in this video is a bravura act of politicking, a testament to the man’s passion, presence, and articulation. It’s also a reminder that, once upon a time, he was known as something other than a punchline. Democrats once saw Weiner as a fighter, a bullish ambassador for the middle class whose piercing voice could rise above the din.

Now they know him for his weiner.

See, in 2011, while still a member of Congress, Weiner accidentally posted a sexually explicit photo to his Twitter account. He lied about it, but the truth eventually came out. He had been sending such photos to a number of women, none of them his wife, Huma Abedin, herself a longtime aide to Hillary Clinton. Weiner apologized. He resigned from Congress. He was humiliated. A few years later, long after the media storm died down, Weiner announced his (doomed) mayoral campaign in New York City.

And that’s where we begin. Kreigman, it should be noted, was Weiner’s chief of staff before he decided to pursue filmmaking, and his early intentions were to try and humanize his former boss in the wake of such a sensational character assassination. Weiner acquiesced at the last minute, inviting Kreigman to begin filming on the day he announced his mayoral bid. And, in its early going, Weiner feels like exactly what Kreigman and Weiner initially hoped it would be: a comeback story. Weiner dominates on the campaign trail, while his opponents are booed for bringing up the bygone scandal. Things also seem to be healing between Weiner and Abedin, who are building a family with their infant son. And Kreigman’s camera is there for all of it, even during moments when everyone else, including some of Weiner’s top aides, are asked to leave the room.

But then the axe drops. A second sexting scandal surfaces, this one even more sensational than the last, what with the arrival of Sydney Leathers, who spun her involvement into media ubiquity and a pornographic career. And this is where the film transforms from a character piece into something infinitely more complex, with Weiner subconsciously strategizing how to stick the landing of the plummeting airplane that is his political career, marriage, and reputation. What’s most amazing, though, is how Weiner lets the camera keep rolling. “Why are you letting me film this?” Kreigman asks during one of Weiner’s most vulnerable moments.

Because of this, the filmmakers are able to capture even the most intimate aspects of the political game, including a scene where Weiner and his long-suffering campaign manager painstakingly craft a press statement without revealing more truth than they need to. There’s also Abedin; though she puts on her best poker face for the cameras, she can’t help but shudder at how Weiner’s actions are affecting both their marriage and her own political aspirations. “It’s like a living nightmare,” she says, a pained smile on her face, in a moment where the mask briefly slips.

As for Weiner, it’s never quite clear where his mask begins or ends. That he never suspends his campaign amidst all the media assaults and hurled invective could be read as either ego or passion, though it becomes clear at a certain point that he views the camera in his face as the only way to salvage his own reputation. And, to a degree, the film does that. In the end, it’s not Weiner with whom you’re furious, but a media climate that routinely prioritizes scandal and lewdness over the intricacies of a candidate’s platform. With the circus that is our forthcoming election rapidly approaching, this message is all the more resonant.

And that might be enough to keep you on his side. For some, it’s ludicrous that the media’s memeification and the public’s fascination with this man’s personal exploits would derail an otherwise promising political career. For others, it’s a sign that Weiner was never somebody to trust in the first place. The media, after all, was always built on a foundation of sensationalism. In the end, Weiner isn’t trying to make that decision for you. Because, though we see him as a doting father, a repentant husband, a firebrand, a charmer, a bully, and a scumbag, he remains frustratingly enigmatic, an unreliable narrator. Which is fitting, quite honestly. Because when you factor in politics or the media, manipulating whatever it is that makes you vulnerable is the only way to survive. Deception, as Weiner shows us, is just part of the game.