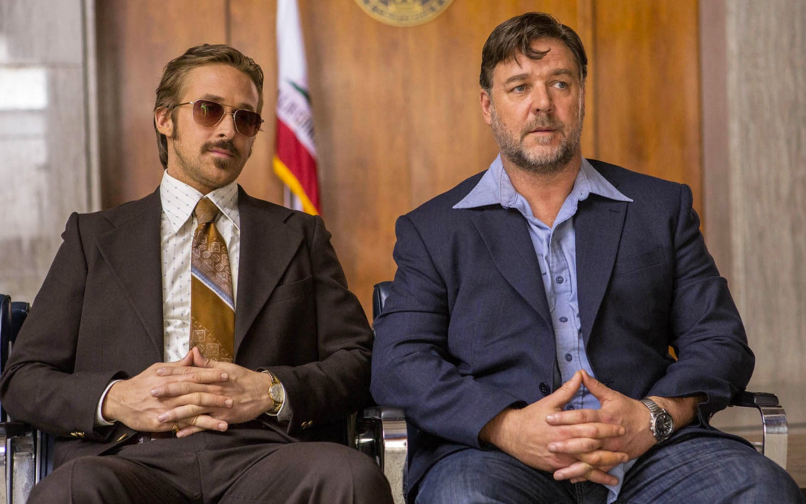 Shane Black is an old-school kind of guy. A greasy-spoon writer with a penchant for snappy dialogue, practical action, and ironic mystery, he’s littered movie theaters with sordid tales of sunny Los Angeles for 30 years now, from 1987’s Lethal Weapon to 2005’s Kiss Kiss Bang Bang to even 2013’s Iron Man 3. These are hyper-masculine stories, all told through the eyes of tortured deadbeats who rely less on their skills and more on their wits — and Black truly runs them through the mill. Dislocated shoulders and broken bones were commonplace for Mel Gibson’s Sergeant Martin Riggs, while Robert Downey, Jr. lost a goddamn finger as Harry Lockhart and his iconic suit amid his third standalone feature as Tony Stark. Such stakes make for better action, and Black doesn’t fuck with his trademarks for his latest feature, The Nice Guys.

Set in Los Angeles circa 1977, a time when Tim Allen, Richard Lewis, and Robert Klein were regulars at The Comedy Store, the story follows Russell Crowe and Ryan Gosling playing two ugly sides of the same grimy coin that is private detective work. Crowe, the L.A. Confidential muscle, stomps around the city as the hulking Jackson Healy, a portly hired enforcer who spends most of his days chasing off scumbag men from innocent youngsters. And Gosling couldn’t be further removed from Drive and his scorpion jacket as Holland March, an alcoholic father who wakes up hungover in half-filled bathtubs and rumpled suits. These aren’t exactly the toasts of the town, but following a series of not-so-unfortunate events, and a nasty fracture to an arm, the two agree to work together to find a missing girl named Amelia (another memorable turn by Margaret Qualley).

Echoes of Kiss Kiss Bang Bang and Inherent Vice are aplenty in this screwball action comedy, only Crowe’s hardly as sharp and efficient as Val Kilmer’s Perry van Shrike and Gosling makes Joaquin Phoenix’s toasted, pizza-loving Larry “Doc” Sportello seem like a bohemian Sherlock Holmes. But that doesn’t matter because, once again, Black isn’t so concerned with the mystery as he’s heavily invested in the scraggly loners he’s offered up. And really, it’s hard not to love these losers, especially Gosling’s March, whose relationship with his precocious daughter Holly (a wonderful and spirited Angourie Rice) winds up being the film’s ultimate revelation. Similar to Michelle Monaghan’s Harmony Lane in Kiss, Kiss, Bang Bang, and even Ty Simpkins’ latchkey-kid-turned-unlikely-sidekick in Iron Man 3, Rice is the stable, intelligent foil to March, and she comes up big. Watching the young child navigate the lascivious wasteland of Los Angeles alongside the two detectives is part of Black’s trademark black humor, and makes for some hilarious moments.

The Nice Guys comes fully stocked with those, thanks to an inventive screenplay by Black and co-writer Anthony Bagarozzi. The two capitalize on the time period with a handful of enviable setpieces, from a smoky bowling alley to a wildly decadent party high up in the Hollywood Hills to a climactic shoot-out at a vintage auto show, and lace the scenery with a rich (albeit expected) concoction of sex, drugs, and rock ‘n’ roll. It’s a dazzling affair, to be sure, and it’s a total joy to watch the characters shake, rattle, and roll to the nostalgic sounds of the Bee Gees, A Taste of Honey, Brick, and Earth, Wind and Fire. (There’s even a blast of KISS wedged in there.) It’s also a relief to witness some grounded action for a change. Save for a fiery cold open, the movie never escalates beyond the driver’s seat, and that’s part of its charm.

Who are we kidding, though? The whole thing is more or less a stage show for Crowe and Gosling, and the two step out of their respective wheelhouses to carry the meandering case to its pulpy end. Crowe revels in the de facto straight man role, but he’s quirky and obtuse enough to not seem too removed from Gosling. He handles the action with aplomb, ducking and diving like the hero he’s always cracked up to be, but there’s a lack of finesse to his demeanor that makes him seem far more human than he’s traditionally outlined. Gosling, however, is a physical god, tripping and falling over every goddamn obstacle in a comedic performance that’s equal parts Mel Brooks and The Three Stooges. It would be unfair to call the action slapstick, namely because Black cleverly subverts every hurdle he tosses out, but it wouldn’t exactly be wrong.

Somewhere in all that madness, Black attempts to wrestle with the moral code of a higher order. “Are you a bad person?,” Holly asks Healy at one point, and it’s a question he can’t answer. Later, she tells her father he’s the “world’s worst detective,” a title he tries to shrug off, only to wear the insult like a shiny, sparkly badge. That Black is able to sell these pathetic, awful anti-heroes is a testament to his formidable strengths as a writer, and partly why the film winds up being such an enjoyable rollercoaster. Resolve is something every story requires, but not all of them earn. The Nice Guys spends nearly two hours treating Crowe and Gosling like a pair of piñatas, beating them mercilessly and unapologetically, and it’s watching them crawl out from underneath and towards some form of redemption that makes the film a genuine smash.