A critique of modern media that frequently misses the mark 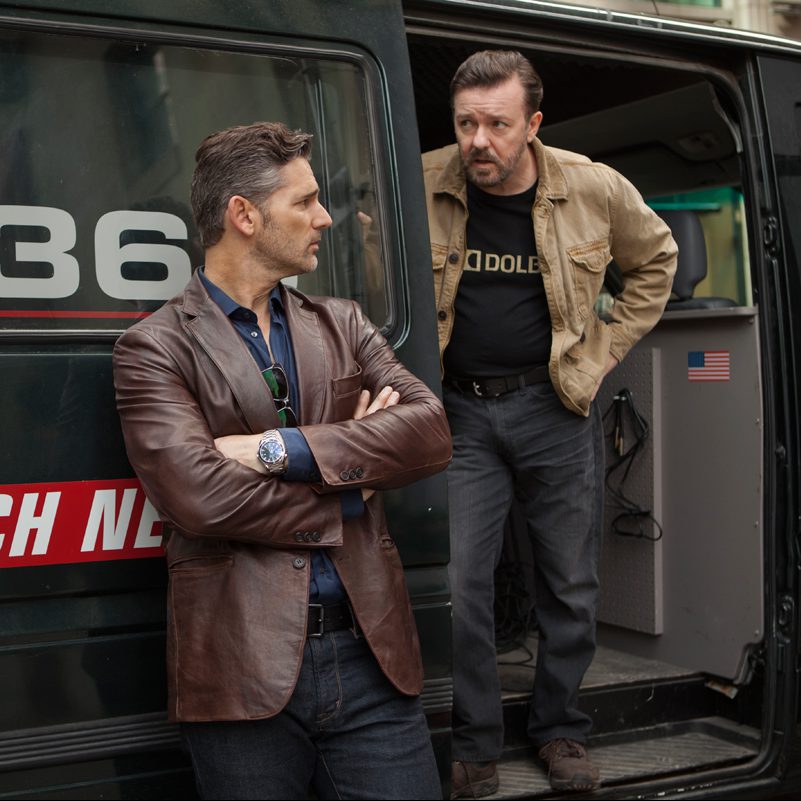 There’s a moment in Special Correspondents that suggests the much better movie it could have been.

In the film, two bumbling radio journalists are grounded after Ian Finch (Ricky Gervais), a sound engineer whose wife has just left him, accidentally throws their passports away when traveling to the airport. The pair are on their way to Ecuador, which has just erupted in violence. Rather than admitting to their mistake, Frank Bonneville (Eric Bana), the handsome yet unscrupulous reporter assigned to their story, suggests they take matters into their own hands. What if they stage a fake conflict using special effects? Ian isn’t so sure. “It’s unethical, though,” he says. “But it’s news,” Frank reminds him.

Written and directed by Gervais, Special Correspondents sets itself up to be a sharp critique of the 24-hour news cycle, a media culture driven by constant updates instead of factual accuracy. Ian and Frank decide their story needs characters, and so they create a noble folk hero to generate human interest, a rebel fighter bravely sacrificing his life for his people. A rival newscaster, John Baker (Benjamin Bratt), claims to have known about the Ecuadorian Robin Hood for years, saying that he didn’t want to report on him until the time is right. Other stations provide further testimony into the rebel’s life and background, everything but what designer he’s wearing. In modern journalism, the line between truth and fiction is perilously blurry.

The premise is similar to Wag the Dog, Barry Sonnenfeld’s classic dark comedy about a Hollywood producer and a spin doctor hired to cover up a presidential sex scandal. To divert attention away from the POTUS, the men decide to make a movie about the United States going to war with Albania, except they sell the production as being real. The film wasn’t just searing and brilliant, it was eerily predictive of reality; shortly before the film’s release, the Clinton administration bombed Sudan just as news of the Monica Lewinsky affair broke.

While it borrows that film’s premise, Special Correspondents inherits little of its inspiration; it would be more appropriate to call the film Slag the Dog. For a political satire, Special Correspondents is light on satire and really isn’t about politics after a while. It’s actually one of those movies about a seemingly ordinary guy who learns that he’s special. The film’s closest antecedent is A Million Ways to Die in the West, in which an average man in a bad romance rises above mediocrity, in order to prove how awesome he was all along. In this case the bad romance is with Vera Farmiga, who plays Ian’s scheming wife, Eleanor.

You’ve met this character before. Eleanor Finch is a facsimile of the Rosie Perez character from It Could Happen to You. They’re both Lady Macbeth types who lack even basic social graces. Eleanor, disappointed that her husband isn’t more of a success, shows up to a work function at Ian’s radio station. She strikes up a flirty conversation with Frank, unaware she’s married to his coworker. This is prior to the fake war, and the two men don’t know each other all that well yet. He suggests they adjourn to her apartment, asking if Eleanor lives “five minutes away.” She notes that it’s a very specific question. “If it were 39 minutes, would that have been too much of a hassle?” Eleanor asks.

Eleanor is a bad person, and the script continually makes that clear. She appears to walk into every scene like Maleficent attending a baby shower. When her husband has to stage a kidnapping and subsequent hostage crisis to continue the ruse, Eleanor organizes a charity in his honor. She uses it less as an opportunity to raise funds for his release than to launch her singing career. A game Farmiga has as much fun with the character as the one-dimensional writing allows; she sings “Dollar for a Hero,” Eleanor’s tribute to her missing husband, as if she’s playing a USO show in hell.

What Special Correspondents doesn’t seem to grasp, however, is that Ian and Frank are just as morally reprehensible. They are difficult to root for. Rather than making some kind of confession, the two choose to manipulate an entire nation. That includes Claire (Kelly Macdonald), a mousy coworker with a torch burning for Ian. She brings him coffee every morning and shares his interest in comic book memorabilia. After Ian’s alleged capture, Claire sits at her desk, haunted by his absence. The two will, of course, be reunited, but Gervais’ script never recognizes that this is an objectively horrible way to treat someone who likes you.

There’s a bigger problem with this scenario: Their broadcasts are so absurdly unbelievable that it’s actively difficult to believe that anyone would be taken in by them. During their first broadcast, Frank describes Ecuador as covered in sand, but then they realize that they aren’t sure what the country’s geography is like. Isn’t it tropical? (It’s fairly mountainous, for the record.) Meanwhile, Brigida (America Ferrera), a restaurant employee, and her boyfriend (Raul Castillo) allow them to record in their apartment. To make the report sound more realistic, they shout noises in the background. “Uncle Miguel!” Brigida exclaims. Ian asks why she would scream her uncle’s name. Because he’s almost deaf, Brigida explains, so she has to speak up.

Ferrera is much funnier in these scenes than her character really warrants. To sell the hostage crisis, Ian and Frank record a video where they beg for their lives. Playing one of their kidnappers, Brigida elects to wear high heels. Ian wants to know what Ecuadorian rebel fighter would ever dress in such a way. “They make my legs look longer!” she explains. Ferrera, playing a lovable dunce, is charming and the best thing in the movie. But like everything else in Special Correspondents, Gervais has no idea what to do with her.

As a comedian, Gervais hardly lacks a sharp perspective. The Office showed him to be a merciless satirist of workplace culture. But when it comes to international politics, the comedian lacks the keen insight to say anything that hasn’t already been said by other filmmakers. Special Correspondents is so devoid of more meaningful commentary that it’s practically headless.