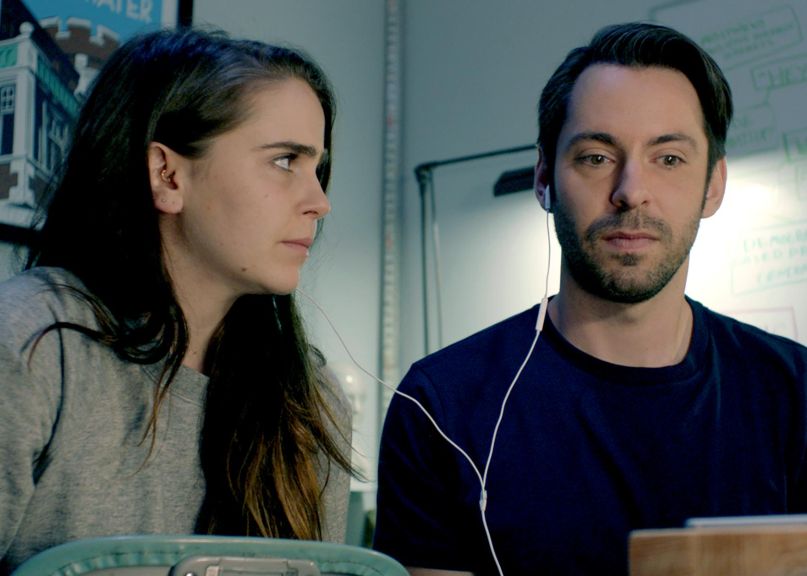 In the 252nd episode of Married… with Children, titled “Live Nude Peg”, Ed O’Neil’s Al Bundy and his NO MA’AM followers head up a local talent search at their go-to stripper dive, The Jiggly Room. Halfway through the contest, the Midwestern buffoon is swept away by a mysterious woman in Middle Eastern garb named Jasmine, who he quickly awards the winner. Spiritually uplifted, so to speak, he returns home to make rare, sweet love to his wife, Katey Sagal’s iconic Peg. What he doesn’t know, however, is that Peg’s been shadowing as Jasmine the whole time. In other words, he’s fallen in love with a fantasy — an ideal — that’s long been a part of his life.

Something slightly similar happens in Logan Kibens’ feature film debut, Operator. For starters, it’s set in Chicago, so there’s that, but more so it’s a chummy cautionary tale about lost perspectives, gender roles, co-dependence, and the perils of technology — all very sobering stuff for this Wi-Fi era. Kibens and co-writer Sharon Greene juggle these myriad themes through Martin Starr’s beacon of anxiety, Joe Larsen, a neurotic programmer who’s obsessed with quantifying endless streams of data in order to grapple with his own choices in life. Everything he does turns into a number, whether it’s running, sleeping, laughing, eating, fucking, or communicating with others.

To be fair, it’s his job, as he develops automated voice systems for companies that would rather not hire humans. When his latest effort is deemed unfavorable by a client, it’s back to the drawing board, where he and his team have to solve how they can make a program feel empathetic. His solution, Joe discovers, is his calm and caring wife, Mae Whitman’s Emily Klein, a wunderkind of hospitality, who satiates irate visitors at the front desk of a hotel with ease. When he brings her in to record a few sessions, she turns everything around, and the program takes off. The problem, though, is that Joe starts falling in love with the program and eventually comes to depend on it.

Meanwhile, Emily is finding a new life as a budding member of Chicago’s landmark comedy troupe, The Neo-Futurists. Urged to dig deeper into her own personal truths by her sage yet venomous mentor, Cameron Esposito’s Chloe Johnston, Emily starts living on the edge, which serves as a loud juxtaposition to Joe’s more regimented lifestyle. Greene is a former member of the experimental theater group, and her celebrated past helps turn this part of the story into a relevant, if not authentic, addition to the proceedings that offers some of the film’s most harrowing moments, allowing the characters to physically tackle the themes at hand in a manner that’s hardly pedantic.

Operator is sleek, stylish, and downright honest. Kibens and cinematographer Steeven Petitteville capture a sunny, quaint Chicago that doesn’t exactly pop up in the headlines anymore. Shot across the North Side’s perpetually cute Andersonville neighborhood, the two capitalize on the Windy City’s iconic summer weather by mirroring the disposition of its central character. Sun-kissed streets and infinite blue skies slowly evolve into dreary London mornings and overcast horizons as Joe steps further and further into his downward spiral. But it’s an assured move by Kibens, working smartly as an environmental parallel to Joe’s snazzy charts that occasionally plaster the screen.

This film wouldn’t work without its performances, though. Starr delivers a commendable turn as Joe, channeling some of his anxious energy from his Freaks and Geeks days while also borrowing some of that wit he currently tosses around in HBO’s Silicon Valley. He’s unfortunately tasked with a tumultuous third act, where he goes from a bearded Mark Zuckerbro to an unstable John Nash seemingly overnight, but he handles it with care. Whitman, however, is a magnetic presence, exhibiting a an eclectic range that should further shame the producers behind Independence Day. Someone should send those idiots a clip of her singing “Because the Night” with Joe’s mother — fucking chills.

It’s admittedly a little on-the-nose at times, mostly from the occasional bouts of ham-fisted dialogue, but Kibens maintains a humble tone and lands her indie dramedy unlike so many veteran filmmakers who have stumbled in the past. Most will point to Spike Jonze’s Her as an obvious parallel — after all, much like Joaquin Phoenix and a digitized Scarlett Johansson, Starr and a digitized Whitman also share a very intimate moment — but it’s hardly as solemn and momentous. Instead, Operator is a spirited 97 minutes that asks a bunch of questions, answers a few, and leaves the rest for you to think about. That’s not just good filmmaking, that’s proper filmmaking.

Having said that, don’t miss that Married… with Children episode, either.