Can Hollywood Still Muster Enough Wonder for Alice in Wonderland?

Some rabbit holes shouldn't be ventured down twice 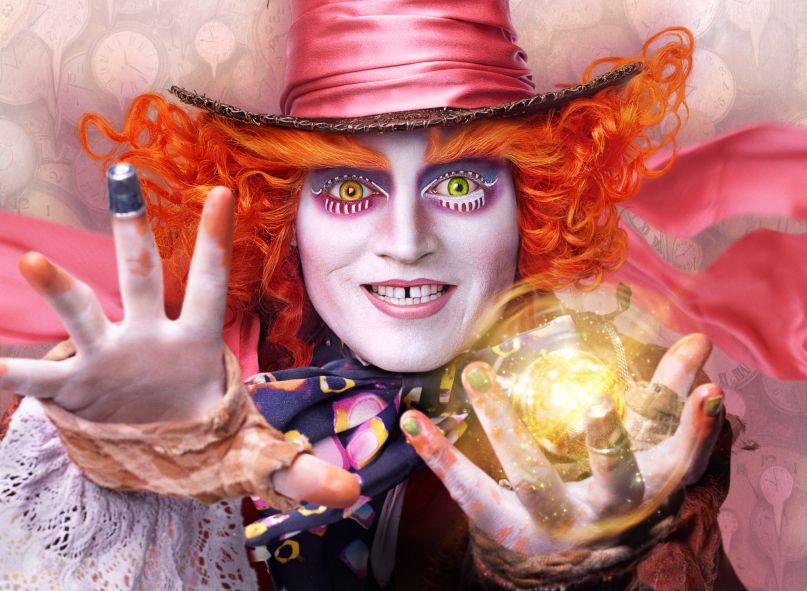 Page to Screen is a monthly column in which Matt Melis explores how either a classic or contemporary work of literature made the sometimes triumphant, often disastrous leap from prose to film. This time, he tumbles down rabbit holes and steps through mirrors on his way to strange lands full of wonder. Curiouser and curiouser, indeed.

“Why is a raven like a writing-desk?” the Mad Hatter famously queries literature’s favorite tea-party crasher. When Alice gives up, the Hatter confesses that he doesn’t know either. Despite the riddle being asked by a clearly insane artisan who spreads butter inside his watch and takes tea with a March Hare and a Dormouse, readers have always suspected a logical solution exists. In fact, author Lewis Carroll spent many years in correspondence with readers insisting that there was indeed no intended answer. Johnny Depp’s Hatter returns to the riddle several times throughout director Tim Burton’s 2010 continuation of the Alice stories. After about 30 minutes of watching that film for the first time, a White Rabbit in a waistcoat – or perhaps my sister – asked why we bothered to continue watching. I replied just as the Mad Hatter does to Alice: “I haven’t the slightest idea.”

Alice’s Adventures in Wonderland (1865) and its sequel, Through the Looking-Glass, and What Alice Found There (1871), are rightfully lauded as progenitors of modern children’s literature. But as W. H. Auden once wrote, “There are no good books which are only for children.” And if we examine Alice’s adventures underground, we find a young girl pitted against a constantly shifting set of arbitrary rules and governing logic set forth by grown-ups. In that sense, Alice is as much a story about childhood as it is a work of children’s literature, which, in addition to Carroll’s delightfully perplexing wit, partially explains why the books follow us into adulthood – studies even claiming that Shakespeare and the bible are the only written works more frequently quoted than Carroll’s tales. That popularity may also explain how Burton’s abysmal Alice managed to generate more than a billion dollars in ticket sales. However, it’s a movie everyone went to see, but nobody seems to remember seeing. Practically a Carrollian paradox.

Adapting the Alice stories raises an interesting dilemma. On one hand, Carroll employs as malleable a structure as any in literature. Alice enters another world through a portal (a rabbit hole or mirror); encounters a series of fantastical creatures; and awakens to find she’s been dreaming all along. That simple framework allows for an incredible amount of interpretive freedom. Consequently, since Alice fell into public domain in the early 20th century, her adventures have been the basis for pioneering early films, animated features, star-studded musical productions, experimental filmmaking, and even musical pornography (curiouser and curiouser). On the other hand, Carroll’s novels are more or less a series of unrelated, nonsensical (and often dark) vignettes full of puns, poems, and linguistic chaos. For modern audiences who are used to and demand escalating, twisting narratives with exhilarating finishes, Alice offers today’s screenwriter virtually nothing to work with – something that becomes painfully apparent when watching both of Burton’s Alice projects.

Burton and screenwriter Linda Woolverton deserve some credit for 2010’s reimagining. A grown-up Alice (Mia Wasikowska) — not an entirely unoriginal idea — who finds herself in the Austenian predicament of marrying for security rather than love — a useful enough trope — suffices as a setup. More interesting, though, is the idea that Alice, who has been haunted by dreams of Wonderland throughout adolescence, must realize that these are memories and not nightmares (reminiscent of Hook) before she can restore order to Wonderland and save herself from a dismal future. This self-reflection neatly returns to the central question of both Carroll’s novel and much of children’s literature, most famously articulated by the Caterpillar: “Who are you?”

But that’s where the intrigue abruptly ends, as Woolverton pulls characters and bits from both plot-thin novels before arriving at a Chronicles of Narnia remake, complete with prophesy, Depp’s Hatter as Mr. Tumnus, and a vorpal sword-wielding final battle against an evil queen (Helena Bonham Carter), her Jabberwocky, and a deck of playing cards. It’s a narrative so slight that it threatens to float away even more so than Anne Hathaway’s wafting, Glinda-esque White Queen. In an attempt to find some sort of marketable narrative, Burton and Woolverton resort to a plug-and-chug method, cramming Alice into popular fantasy formulas of the time. If not for Burton’s unmistakable visual landscape, her adventures could just as soon take place in Narnia, Middle-earth, or Oz as Wonderland.

Alice Through the Looking Glass — helmed by director James Bobin but still produced by Burton and scripted by Woolverton — confirms that some rabbit holes shouldn’t be ventured down twice. Pinning its success to the debatable likability of Depp’s turn as the Mad Hatter, we find Alice (or is that Elizabeth Swann?) sailing the seas of Time in order to right the wrongs done to the Hatter’s family long ago by the Red Queen. Here, Woolverton has taken Carroll’s playful personification of “Time” from the chapter “A Mad Tea-Party” (just as she ran with a couple lines from the poem “Jabberwocky” in the previous film) and crafted Alice Back to the Future with an icy-eyed Time (Sacha Baron Cohen), who unforgivably smacks of Schwarzenegger’s Mr. Freeze, hunting down our heroine.

When that plot predictably wears thin, the film resorts to a Red Queen origin story (think: How the Grinch Stole Christmas), callbacks to the previous film (hey, it’s a headless Crispin Glover, kids!), and an end-of-the-world scenario as Time unravels (think: The Neverending Story). At one point, a dumbfounded woman sitting near me in the theater simply shrugged and said, “Sure, why not?” It’s to these ridiculous lengths that Burton, Bobin, and Woolverton go in order to try and make Alice a fantasy thrill ride rather than a competent story that bears some resemblance to its beloved source material. Should Burton sadistically make this project a trilogy, that film will undoubtedly be Alice in name alone.

Adapting Alice for modern audiences may be a riddle as unanswerable as the Mad Hatter’s. But part of any solution must include recognizing the wonder that still exists in Wonderland. It’s been more than 150 years since Carroll’s novel debuted, and nothing before or since has ever been quite like it. And yet, as suggested above, the latest Alice adaptations do little more than remind viewers of dozens of other big-budget movies this Wonderland borrows from, moments that pull the audience right out of the adventure and strip Wonderland of its wonder.

For instance, when Alice accelerates in the stolen Chronosphere (yeah, a time machine) directly toward Time and the Red Queen and vaporizes just before running them over, it took all my restraint not to mumble, “Must’ve hit 88 miles per hour.” And yet, for how lazily cobbled together the story may be, some charm still manages to eke through: the Tweedles’ contrarian back-and-forth, the March Hare flinging teacups at random, or Alice and Time engaging in dizzying wordplay that Carroll no doubt would’ve enjoyed. The Burton experiment has made it clear that any hope for Alice on the silver screen in the future relies more on tapping into the timelessness of the novels than trying to fit in alongside contemporaries.

Red flags should have been raised when Burton’s first Alice film began on a foggy London night rather than a golden afternoon. At one point, Burton may have been the director or producer to bring the wonder of Wonderland to theaters. Now, we wonder if he’s sunk too far into self-parody, where a Tim Burton film feels more like a film presented in the style of Tim Burton, to bring his own worlds to life let alone those of others. When Carroll’s Hatter tells Alice that he doesn’t know the answer to his own riddle, she sighs: “I think you might do something better with the time than wasting it in asking riddles that have no answers.” The same might be said about Burton making Alice films.