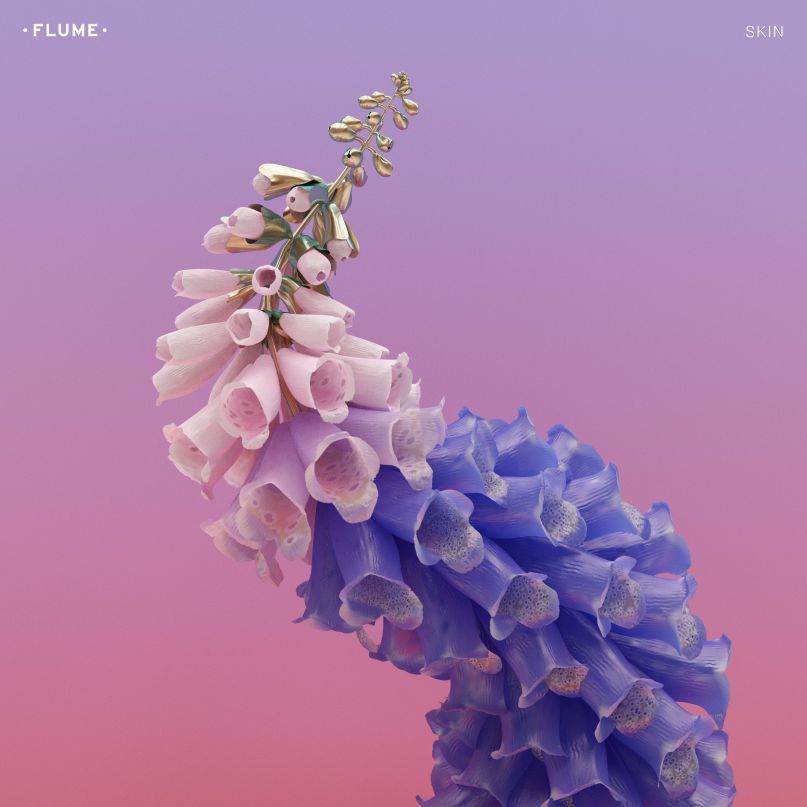 On March 21st, Diplo started a minor twitter blaze by calling out Zedd and his “fake flume drop” on the M&Ms-sponsored cover of Willy Wonka classic “The Candy Man”. While deadmau5 also decided to chime in (of course), Australia’s Harley Edward Streten (bka Flume) wisely steered clear of the drama and sensationalist headlines. In an era when EDM stardom can be as close as a light-up mask, clever anonymous alias, and management-directed collaborations, Flume has continually avoided the gimmicks and concentrated on a production palette that festival-goers crave and Billboard Award recipients are looking to hijack. Gearing up to be the next EDM crossover talent, Flume’s sophomore effort, Skin, showcases a producer at ease with all of the sounds moving tickets at America’s major festival events: hip-hop, indie pop, and EDM.

In part due to the Stateside rise of dubstep and trap since the turn of the decade, the building blocks of electronic music have been fundamentally impacted by these genre’s prevailing low-end distortion. Streten is a master of this new dialect. Revered among that “future bass” community, Streten is prime to break through the top tier of dance music and share a new vision of future pop with the masses. But while Skrillex has been shunned by droves of his early supporters for “selling out” and working with Justin Bieber and Diplo has established himself as the best in regional music appropriation, Streten has earned the freedom to entertain both the underground dance aficionados and mini-van driving soccer moms on his own, unique terms.

The incendiary tempo of “Smoke & Retribution” (featuring Vince Staples & Kučka) and the downtempo garage of “Innocence” (with an appearance from AlunaGeorge) attest to Streten’s malleable production tactics. He maximizes the strengths of his guests without diminishing his own abilities. Also featuring the likes of Vic Mensa (“Lose It”), Raekwon (“You Know”), and Little Dragon (“Take A Chance”), Skin’s intent is to appeal to a large, eclectic base. However, the sterling, Kai-featuring “Never Be Like You” is proof that Streten can generate massive hits no matter how well established his studio partners may be.

Lead single “Helix” commences with minimal tribal atmospherics before contorting into a fierce, progressive banger. Later, “When Everything Was New” reflects the naïve innocence of an elementary school playground, a massive shift from the braindance hysterics of “Wall Fuck”. Just as remixes for Lorde, Sam Smith, and Arcade Fire assisted in pushing Flume into the mainstream, Skin’s singles leave ample room for edits from producers across the spectrum. The break after the first verse of “Take A Chance” is so bare that it begs for re-envisioned builds leading into the playful 8-bit-infused plateau.

Closing out the album with Beck on “Tiny Cities”, Streten offers a professional hat-tip to a producer/multi-instrumentalist that regularly re-invented his own artistic rules, and more broadly, the rules of alternative rock music. As Flume, Streten is on a similarly earnest mission to push the acceptable, tasteful boundaries of EDM and pop.

Essential Tracks: “Never Be Like You”, “When Everything Was New”, and “Smoke & Retribution”