The exclamation mark on a raw, rumbling era of Ian Bavitz's life 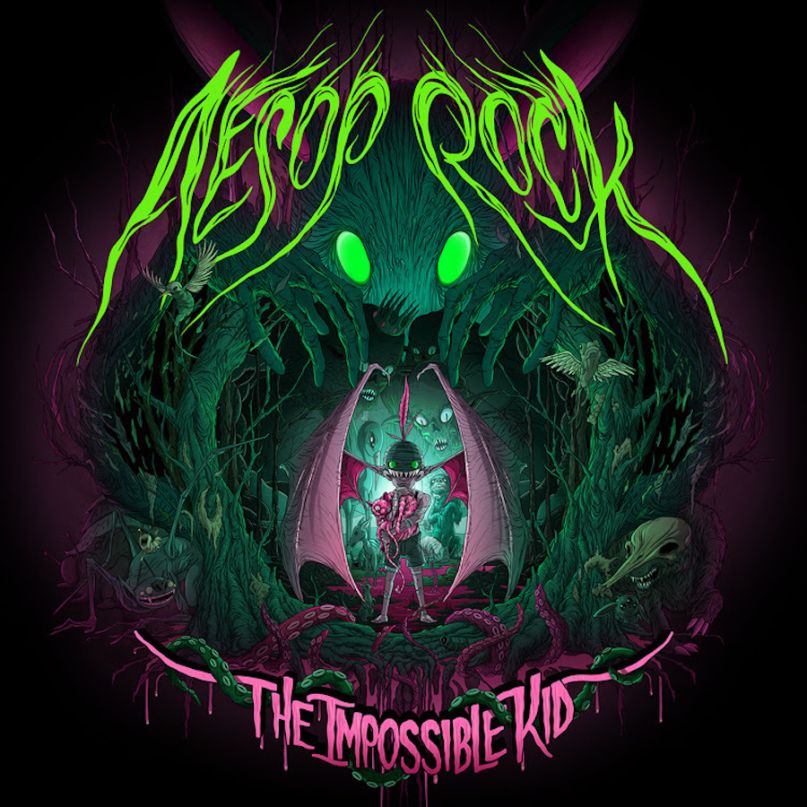 Aesop Rock was the jewel in the Definitive Jux beanie. His clutch of noughties records for the label saw him and long-time producer Blockhead craft brass knuckles rap that sounded like analogue machinery grinding below New York’s pavement. In the cockpit was Aes, who blasted tongue-twisting rhymes from skewered vocal cords. His vernacular was like a weird kind of subterranean dialect, the abstract lyricism of another planet. The pair were like The Simpsons’ maniacal galactic conquistadors, Kang and Kodos, in human form. They looked like real people, but it was a poor impression.

Who could have predicted then that six years after the company went on hiatus and the roster scattered into the indie hip-hop landscape that it would be the man behind the music, El-P, with the firmest grip on rap stardom? Album of the year acknowledgements as one-half of Run The Jewels, high-profile gigs on Hollywood movies, and stage introductions from presidential candidates have become El-Producto’s world. Meanwhile, Ian Bavitz — forever content to hide in the shadows — headed out west, rekindled his love for art and skateboarding, and kept feeding his fervent fan base with records further engraved in his singular style.

The story of The Impossible Kid, his second album on Rhymesayers, begins in a barn in the woods in Washington, where Aes pitched up in after leaving San Francisco to begin sketching out a new record. Put it down to the more tranquil surroundings — or put it down to his impending 40th birthday — but the emcee’s seventh full-length sees the spaceman sliced open for all to see. The highly personal takes are peppered throughout, with strained family relationships, mental health issues, and impending middle-age all on his mind. Aes will always sound like that twisted intergalactic creature, but the album sees his rhyme schemes at their most melodic and accessible, giving the confessionals an extra sharp edge.

In typical form, Bavitz comes at subjects from skewed angels. His book of rhymes is a glue-sticked scrapbook of Greek myth, photocopied movie scripts, and holy KMD doctrine. It’s an ethos where nothing is obvious. On “Lotta Years” he ponders getting older by talking tattoos with a 22-year-old Baskin Robbins clerk and recalling an eavesdropped conversation between a dreadlocked juice shop worker and a customer. “You should have seen me in the ’80s/ I was bumping New Edition, dragging acne into Hades,” he says, gauging the changes in youth culture the last two decades. “Dorks”, meanwhile, finds him reminiscing about the “fugitive community” that came together in New York’s ’90s indie rap scene. These are the ruminations of a maturing art kid coming to terms with a life spent flittering in and out of the margins of society.

The reflections on the past don’t just surface as grinning nostalgia. On “Blood Sandwich”, Aes laments the distance that’s grown between him and his two brothers over the years. The short-story-like structure recalls anecdotes from both of their youth: a gopher that interrupted his younger sibling’s Little League game, and their mother’s objections to his big brother’s musical taste. Aes raps with a sigh under his breath for the good times and the lost years. For an artist who does a good impression of something weird and other, his take on one of the most basic human relationships is heartfelt and affecting.

Still, Aes won’t let you forget he’s one of the greatest to ever stack syllables on syllables. On “Shrunk” he lays out his first visit to a new psychiatrist, describing how he swerved giving any real details while filling out the forms (“My address, a made up language written out in living glyphs lifted from demonic literature and religious text”) and the tense back-and-forth between himself and the counselor. The flow is complex, the gags are funny, and the conversation feels legitimate. This is rappin’-ass- rappin’ at final boss level, with Aes using his super powers for narrative effectiveness, not just to fuck with every other inferior rhymer in the game.

Like his previous album, 2012’s Skelethon, Aes self-produces every song, his beats ringing with the raw, rumbling intensity that has long been his trademark. Despite the similar aesthetic to what’s come before, mundanity refuses to set in. This is another great Aesop Rock album to add to the pile — another TKO to further solidify his underground king status. The next step probably won’t be the hyper-drive into mainstream spotlight that some of his peers have enjoyed. That’s fine. The Impossible Kid still feels like the exclamation mark on a chapter in Bavitz’s life — a love letter to the distance already run. What he does next can be just as remarkable.