A Day at the Ramones Museum with Modern Baseball

Philly foursome explore their punk roots at the Queens Museum's "Hey! Ho! Let’s Go: Ramones and the Birth of Punk" 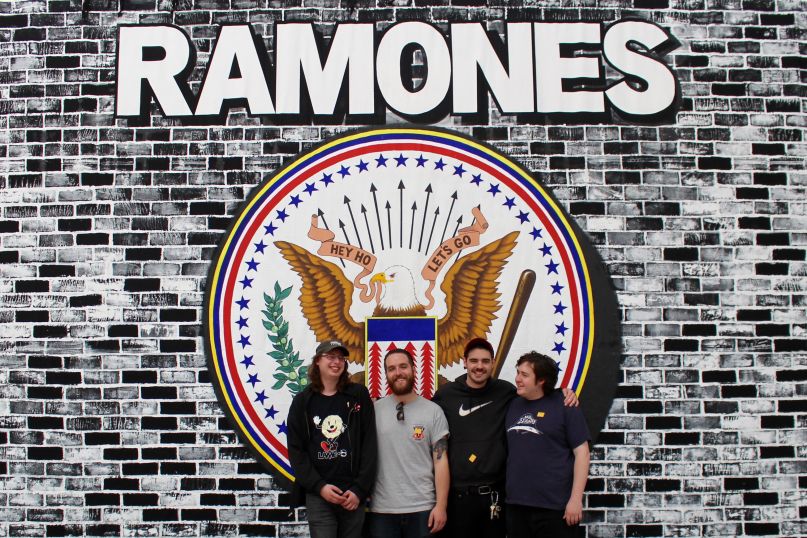 Sean Huber has already paid the George Washington Bridge toll twice today (don’t ask) and is sitting on a park bench outside the Queens Museum when the rest of Modern Baseball roll up. They catch up for a bit as Huber explains his misfortune, but the Philadelphia punk quartet — guitarist/vocalist Brendan Lukens, guitarist/vocalist Jake Ewald, bassist Ian Farmer, and Huber on drums — didn’t come here just to chat. The real reason we’re all gathered here in front of the Queens Museum in Flushing Meadows-Corona Park? Three words: the Ramones exhibit.

A giant mural at the beginning of the exhibit puts “punk” in quotations, so it’s clearly not targeted at people who actually make their living playing in a punk band. But the exhibit also paints the Ramones as four regular, unassuming guys who met in high school, and this is definitely something Modern Baseball can relate to. As the recent documentary Tripping in the Dark illustrates, their beginnings are similar. Ewald and Lukens went to the same high school in Brunswick, Maryland, just two regular guys who wrote songs together until moving up to Philadelphia and eventually joining forces with Farmer and Huber.

Out of the group, everyone points to Farmer as the biggest Ramones fan and scholar. “We’ve been to the Berlin Ramones Museum three times,” he says proudly. “It’s a really cool setup there. There’s one guy who’s the curator of it who collected so much, and it’s just a huge dive into that punk experience.”

While all four bandmates consider themselves Ramones fans, only Farmer is truly obsessed. The others gravitate more toward other groups that have clearly influenced Modern Baseball’s sound — a hodgepodge of folk punk, pop punk, emo, and power pop. The first CD Ewald ever owned was Green Day’s Dookie, which led him to Motion City Soundtrack, which led him to Superchunk, which finally led him to Merge Records’ entire catalog.

Lukens isn’t quite as proactive about hunting for music. He isn’t ashamed to admit that he still listens to the radio (Smashing Pumpkins are his go-to rock band), and he insists Farmer and Huber listen to literally hundreds more artists than he does. But he’s also incredibly attentive when he finally does get into a regional act like Queen Moo or Toronto punks PUP, and those bands often end up influencing his songwriting.

Ewald and Lukens have shared songwriting duties in the band from the beginning, and they divided those duties right down the middle on their most recent album, Holy Ghost. But there’s one band both guys can agree on in terms of being a huge, lasting influence: Canadian indie rockers The Weakerthans.

“When we started out, I was all about Say Anything and Motion City Soundtrack, but now I’m way more about Alex G or The Weakerthans,” Lukens says.

Ewald agrees, noting that most of the band’s influences reside on the periphery of what most would consider punk. “We got all the remnants of punk,” he jokes. “My favorite band ever is The Weakerthans, and while they’re sorta punk, there’s this melodic, folky side to it that really drives it home. He’s a folky dude in a punk world, and that’s our main thing.”

One listen to Holy Ghost is all it takes to confirm The Weakerthans influence. It shows up in the frantic poetry of “Wedding Singer” and in the lyrical callbacks sprinkled throughout the album. The Weakerthans have a habit of pulling one line from a song and repurposing it elsewhere, which is exactly what Lukens does on Holy Ghost closer “Just Another Face”, echoing words from the very first song he ever wrote, “How Do I Tell a Girl I Want to Kiss Her”. “We’ve talked about doing lyrical things like that,” Ewald admits. “It’s absolutely intentional.”

Guitars hang from the walls in the second room of the exhibit, which is dedicated to the Ramones’ touring history and live setup. This is where Farmer really gets to show off his knowledge; the band’s rider apparently included two six-packs of Yoo-hoo, which he explains led to Dee Dee becoming the company’s spokesperson (“He just loved Yoo-hoo”). The room essentially functions as a shrine to touring, which gets the guys talking about their own history playing shows.

“When we moved to Philadelphia, there was a pretty big DIY house show scene that we got sucked into because we wanted to play,” Lukens says. “From there, our friends steered us in the right direction with working outside of the city.” He confesses that it kind of sucked at first, with the band reduced to “annoying people booking us because we were unknown.”

Of course, things only got better from there. “When we got out to California,” Ewald recalls, “everyone knew all the songs already. We got home and I’m like, ‘You’re not gonna believe this! People already knew the songs!’” He credits the internet and Bandcamp specifically for helping the band spread the word.

This inevitably leads inevitably to another similarity between Modern Baseball and the Ramones. Just as the former broke through via the internet, the latter took off with the help of television. The Ramones weren’t exactly radio stars, as the exhibit keenly points out, but their career rocketed skyward as soon as those slick leather jackets found their way to TV sets.

And if that weren’t enough to cement the connection, there’s this: Modern Baseball actually recorded a Ramones cover with Farmer singing in a mock Ray Romano voice — an imitation he can do pretty well in any context. They wanted to release it as a 7-inch single under the band name The Ramanos, but strangely enough, that band already exists.

Farmer may joke around a lot, but his love for classic punk is serious. “I grew up listening to these bands — the Ramones, The Clash, X, Television,” he says. “My dad was all into those, and we would listen to all of them together. I have a cool dad,” he laughs. “He tells me he loves Modern Baseball, but he would totally say that even if he didn’t.”

The final room of the exhibit focuses on the Ramones’ legacy: how they’re remembered for creating a sound and an image that’s still used (and ripped off) today. For some, it’s the Rock ‘n’ Roll High School movie, their “Happy Birthday Mr. Burns” appearance on The Simpsons, or just the fact that four sometimes-friends, sometimes-foes were able to unite under the banner of playing really fast punk songs. Modern Baseball’s legacy might end up more complex, but Ewald already has a clear picture of it.

“At least for as long as we put out records, I want to grow with our fans rather than just grow with us,” he explains. “When they get older or have a life crisis or whatever … they’ll still listen to [us]. I want to be a band people still listen to.”

In other words, Modern Baseball want to be the Ramones.