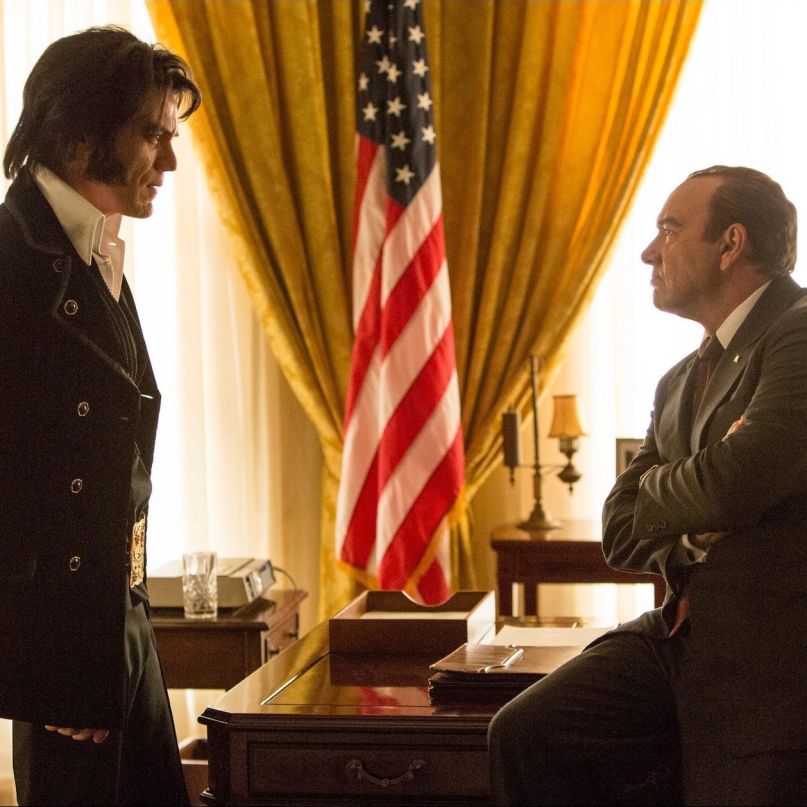 Follow our coverage of the 2016 Tribeca Film Festival here.

Elvis & Nixon will not go down as the best movie you’ll see this year, but it very well may be among the most purely entertaining. Directed by Liza Johnson (Hateship Loveship), the Amazon Studios release re-imagines the 1970 meeting between an aging Elvis Presley and Richard Nixon as a delicious slice of historical fan fiction. As the film reminds us, there’s no written proof of what transpired between the two men, but this is not to the film’s detriment. In fact, Elvis & Nixon’s lack of accuracy liberates it. To quote a warmongering government official from In the Loop, the film is not a “record of what happened to have been said but what ought to have been said.”

In Elvis & Nixon, the country superstar turns on the television to find that he no longer recognizes his own country. This was a revolutionary era, when a nation of young people rose up to protest Vietnam. Elvis Presley (Michael Shannon) has a difference of opinion; to him, it looks like the end times. He travels to Washington D.C. with the intent of offering his services to President Nixon (Kevin Spacey) as a “federal agent at large,” hoping that he can go undercover to infiltrate the counterculture. He points out that because he’s Elvis, hardly anyone will suspect him of working for Uncle Sam.

The script is penned by Joey and Hamala Sagal, along with Cary Elwes (yes, that one), and the writers pitch the absurdity of these interactions perfectly. In a meeting with government officials, Presley further explains that his background as an actor makes him perfect for the job. “I’ve been in 31 major motion pictures,” he tells a DEA agent. “That makes me an expert in costume and disguise.” The gentleman is not convinced, so Elvis attempts to bribe him by offering to provide a generous donation to his office. “We’re fully funded by the government,” the agent responds. “We are the government.”

None of this would work without an insane and inspired bit of stunt casting, so Elvis & Nixon enlists noted serious thespian Michael Shannon to play The King. Although Shannon is known for his deeply immersive work in films like Take Shelter and Revolutionary Road, his performance here is less method than it’s a great drag impersonation. Shannon, often a walking frown of a human, has never shown off his comedic chops quite like this, and Elvis & Nixon feels like a coming-out party. He’s nothing short of a revelation.

What makes Shannon’s performance so remarkable is that despite going unimaginably big, he never plays the man as a punchline. From his gold-belted leisure suit to the plethora of guns he carries on his person, Presley takes excess very seriously. There’s never a hint of irony in the portrayal. Instead, Shannon makes the King into a Don Quixote-like figure, believing himself to be the world’s last knight. Elvis’ Sancho Panza is Jerry Schilling (Alex Pettyfer), a longtime friend and reluctant assistant who’s routinely roped into his schemes. And Jerry is joined on the White House quest by Sonny (Johnny Knoxville), who frequently uses his friendship with Elvis to convince women to sleep with him.

It’s when Michael Shannon isn’t onscreen that the party comes to a screeching halt. Like My Week With Marilyn before it, Elvis & Nixon curiously decides to make the musician into a supporting character in his own life. It’s Jerry Schilling, who would go on to manage Billy Joel, who’s technically the lead. The film spends a great deal of time on the question of whether Jerry will settle down with the nice girl waiting for him back at home (Sky Ferreira), and the answer is a foregone conclusion. It doesn’t help that Pettyfer, who struggles badly with his American accent here, leaves little impression as an actor. His defining feature is that he is simply there.

But at the same time, Elvis & Nixon’s shaggy, ramshackle quality is one of its key charms. This is a film, after all, in which the leader of the free world repeatedly laments that meeting Elvis will interrupt his naptime. The two eventually bond over their mutual love of M&Ms. During their meeting, Spacey — who must be getting used to the Oval Office by now — wisely plays up Nixon’s insecurity about his masculinity. After learning that Elvis Presley knows karate, Nixon anxiously asserts that he would be able to take the King in a fight. Later, Presley gives the president a demonstration of his martial arts skills.

Their bromance doesn’t add up to much, but that’s because nearly everything is an afterthought in Elvis & Nixon. Like a giant stick of cotton candy, it’s a movie that evaporates as soon as you put it in your mouth. Occasionally, however, its images linger and suggest something more than sugary escapism. Although Jerry fears a life lived in Elvis’ shadow, the King confesses that the spotlight also has its downsides. He laments becoming a commodity. “I’m no different than that bottle of Coke,” Elvis says. Elvis & Nixon may only hint at the wounded soul underneath the velvet, but it still makes for good company.