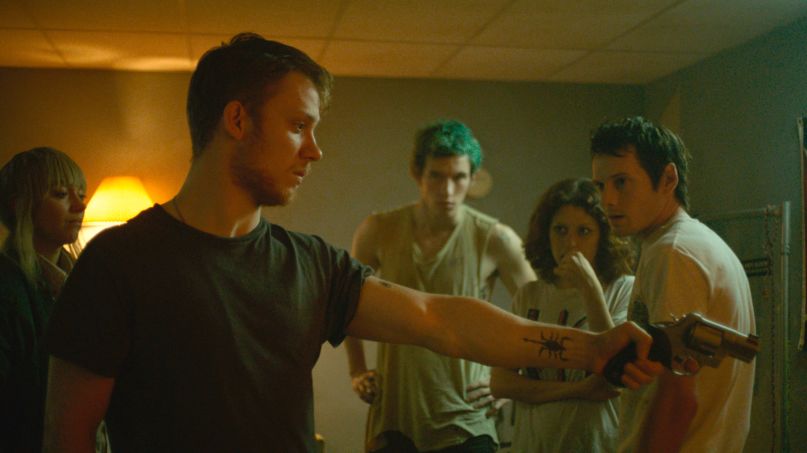 Writer and director Jeremy Saulnier has quickly been establishing himself as a master of physical and existential terror with films like 2013’s Blue Ruin and 2007’s Murder Party and his latest offering Green Room should even further solidify his status as a genre filmmaker to watch.

Down on their luck and in need of money, a band called The Ain’t Rights accept a shady-sounding gig at what turns out to be a Neo-Nazi compound in the backwoods of Oregon. In true punk spirit, they open their set with a cover of The Dead Kennedy’s “Nazi Punks Fuck Off” and antagonize their skinhead audience for the entirety of their set. But the awful audience turns out to be the least of their problems.

(Read: A Conversation with Jeremy Saulnier)

When the band witness a brutal act of violence backstage, the club’s staff, led by the casually brutal Darcy (Patrick Stewart), set about covering up the act and disposing of everyone who knows about it. Locked in the titular green room backstage with a body, a guard, and a woman with ties to the white power scene, the members of The Ain’t Rights, must rely on their wits and whatever makeshift weapons they have on hand to try to save themselves and escape an army of drug-dealing, knife-wielding, attack dog-training skinheads intent on their annihilation.

It’s one hell of a premise for a film, and Saulnier executes it beautifully, setting up the scene and then logically and thrillingly mining it for every possibility. The attention to detail in the way that the battle between punks and skins plays out is impressive, as is the verisimilitude. No one gets dumbed down or magically elevated to heroic status in service of the plot. The character’s lightly sketched backgrounds all play a role in the fight for their survival and an inspired number of objects lying around the joint get used in a sort of DIY-meets-MacGyver fashion along the way. Everyone is fallible but resourceful in some way, and no deus ex machina is coming to fight for either side. All that’s left to do is sit back and bite your nails while you watch the body count climb.

The plot unravels beautifully, at a pace that’s methodical but still anxiety-inducing, building up an air of psychological fear so impenetrable that the only relief from it is an occasional splattering of visceral horror or an even more rare quip along the way. The cast’s slightly understated performances –at least as far as genre film goes–also add to the atmosphere. Stewart is chilling and wryly funny as Darcy, the sinister antithesis of his most famous and beloved roles, and his henchmen are all uncomfortably believable as violent white power douchebags. The band (particularly Alia Shawkat, Anton Yelchin) and their questionable ally (Imogen Poots) do an excellent job of playing prey without devolving into old school horror histrionics. They’re scared, but they’re also stunned. Most viewers will want them to prevail, even as they realize that there’s not much chance of it.

Green Room maintains this hair-trigger tension, toying with genre conventions like a cat with a mouse before eventually subverting them to the end. And even then, at the risk of lightly spoiling things, it proves playfully unpredictable to the very last frame. Perhaps the only thing more exciting than waiting to see what transpires in Green Room is waiting to see what Saulnier does next.