A superbly crafted examination of grief and severe depression 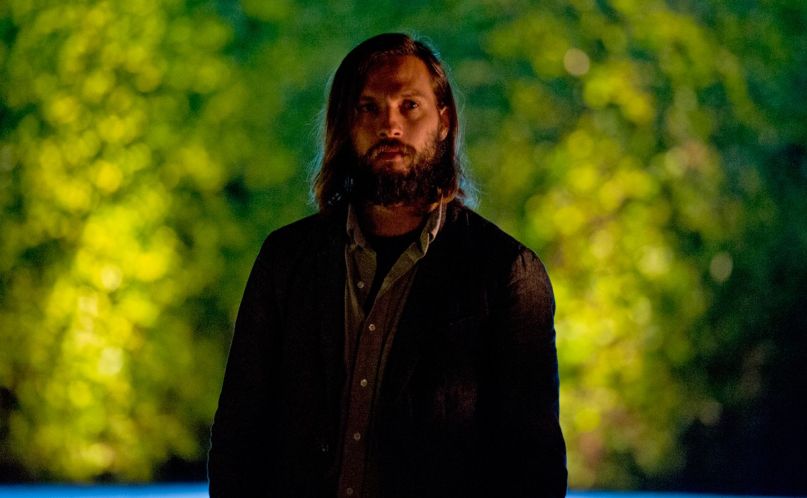 This review was originally published as part of our coverage for the South by Southwest Film Festival 2015.

Karyn Kusama’s The Invitation hinges on one key question: Is Will (Logan Marshall-Green) losing his mind, or is it the world around him that’s going insane?

Two years after a sudden, cataclysmic tragedy separated Will from his wife Eden (Tammy Blanchard), she’s back in town. She and her new husband David (Michiel Huisman) want to have Will, his girlfriend Kira (Emayatzy Corinealdi), and nearly a dozen of their old mutual friends over for a dinner party. Will hasn’t been back in his old house in a long time, and the night gets off on the wrong foot when he accidentally hits a coyote on the drive over and has to put it out of its misery. And then, when Will arrives, he finds a very different Eden from the one he knew, a woman convinced that “all that useless pain, it’s gone.”

Eden and David seem to be at peace, and their friends are just happy to have the old gang back together. They eat, drink, and play party games, and even if Eden and David seem a little off, it makes sense. After all, they’ve both been through a lot. The Invitation slow-burns through the evening, as suspicions ebb and flow, and social niceties are teased and stretched. And at the center of it is Will, a man so beset by his own depression that he can’t tell if Eden’s newfound serenity is unusual or if he’s envious of her being able to find solace, peace, and a contented new love while he hasn’t. Marshall-Green gives a perfectly restrained performance as Will, filling every lingering glance with inquiry and fear, turning him into a wounded animal barely able to separate his own powerful neuroses from reality.

(Interview: The Invitation to Madness: A Conversation with Karyn Kusama)

In so many words, The Invitation is supremely well-crafted. Nearly every frame takes place in or around Eden and David’s lavish house in the hills of Los Angeles, a space just isolated enough to send the already fragile Will into a paranoid spiral. Despite his friends’ admonishments that “it’s LA, they’re harmless,” Will can’t let it go. He can’t let it go at dinner, over drinks, or even when Eden follows a strange video concerning the meditative Mexican retreat she went on to find peace with a variation on “Never Have I Ever” called “I Want.” For Eden and David, there’s no point in holding on to pain, or anger, or much of any emotion besides bliss. And it’s even more foolish to deny human impulse, no matter how base.

A bit of advice: Don’t get too caught up in trying to answer The Invitation’s central question. The film is less a mystery or a thriller in the traditional sense, although it could be reasonably declared as both, than an examination of grief and severe depression and what those can do to the human mind. Is David’s brusque treatment of Will just a simple territorial gesture between a husband and an ex? Is Will unreasonable for repeatedly failing in the effort? And just who are these friends of Eden and David’s who came to the reunion? As the inconsistencies and questions start to pile up, Phil Hay and Matt Manfredi’s airtight screenplay takes time to linger on everybody at the party, not just the key players. They turn Eden’s home into a contained universe in which every friend matters to the group, and every single one has some sort of strong opinion about why Will’s ended up the way he is and how he might learn to move past it, to embrace the future instead of the inalterable past.

It’s inevitable that the many thinly veiled tensions within the house will eventually manifest in one manner or another, and indeed they do, but Kusama wisely leaves the overwhelming majority of the film to the imagination. Even if something might not be right with the happy couple, Will is still a wreck, a man prone to uncontrollably lapsing into fits of agonized memory. Kusama and cinematographer Bobby Cross frame Will in frequent isolation, making abundantly clear that whoever Will once was, the man seen in brief and fleeting glimpses throughout, is gone, replaced by an uncertain being who doesn’t know how to get out of the fog in which he’s found himself. Frequently Will slips away to collect himself outside, and it’s in these small, quiet moments that The Invitation finds its truest meaning. Will’s standing right outside his house, and yet he couldn’t be farther from home.