Five Reasons Why Star Wars: Rogue One Could Be Better Than The Force Awakens

Judging from the teaser, The Force is strong with this anthology film

by Michael Roffman and Cap Blackard 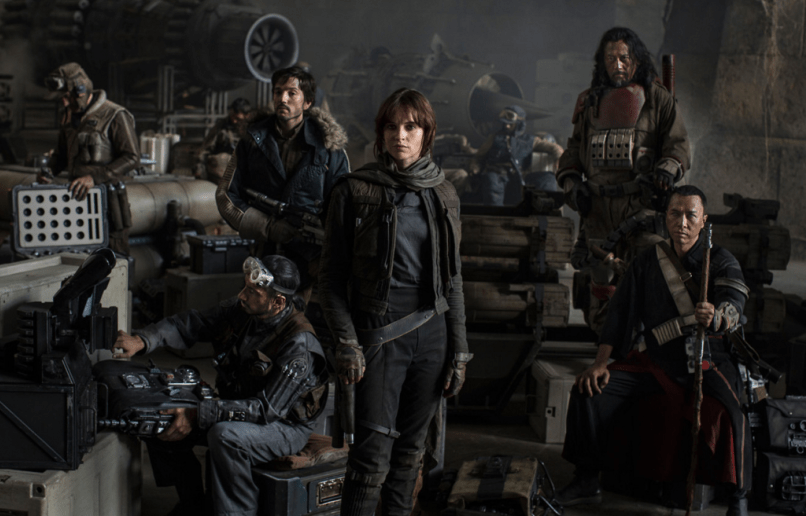 Now that Disney has officially released Star Wars: The Force Awakens to living rooms worldwide, they’ve finally started focusing on the next installment in their franchise, Rogue One: A Star Wars Story. As our Bothan spies at State of the Empire pointed out a couple of weeks back, the first anthology film has been something of a mystery: With the exception of a hush-hush teaser at Star Wars Celebration last year, and a bad ass portrait of the ensemble cast (see above), we’ve been completely in the dark.

Where to begin? While there’s a wealth of nostalgia at hand, from Yavin 4 to Mon Mothma to AT-ATs to the Death Star itself, there’s a remarkably fresh aura to the scenes at hand. As director Gareth Edwards insisted from the get-go, “This film is about moral grey areas and realities of war,” and that statement reads loud and clear within the teaser’s surprisingly economical two minutes. This isn’t going to be your average Star Wars film, but it’s still going to be a Star Wars film.

There’s something refreshing about that idea. One of the stonier arguments lodged against JJ Abrams’ The Force Awakens is that too much of the film capitalized on familiar story beats and worn-out tropes, with some even arguing it was more or less a remake of the original 1977 blockbuster. They’re not exactly wrong, though, and that’s why there’s reason to believe Edwards’ galactic war epic might wind up being the fresh and exciting Star Wars film we’ve been looking for…

Again, it’s only two minutes — and let’s be real, The Force Awakens was a goddamn blast — but there’s a lot of promise in those two minutes. (Come to think of it, Edwards really does know how to sell his films with a handful of time. Anyone remember those trailers ahead of 2014’s Godzilla? Beautiful stuff.). Because of this, we’re going to go out on a limb and say that there’s a hot chance Rogue One winds up being a better film than The Force Awakens. Does it matter?

No, but it’s fun arguing anyway.

Over seven films, we’ve seen our fair share of Warfare in the Star Wars universe, but everyone knows a game of Battlefront looks and feels more dangerous than anything that’s ever hit the silver screen. (A minor exception is the Battle of Hoth from Empire Strikes Back.) With Rogue One, however, it looks like we’re going to witness the panic, fear, and brutality of the long storied battles, and here’s why: The principal characters aren’t around. These are ground-level troops that aren’t destined to be the next Luke Skywalker or Han Solo or Princess Leia. That’s a troubling prospect for the ensemble cast, but an intriguing design for the audiences to revel in. Anyone can die and they likely will. Just look at that GIF. They’re running at the AT-ATs. –Michael Roffman

Let that sink in for a moment. Thus so far every Star Wars tale to hit the screen has featured a Force-wielder. And that makes sense, after all, as Obi-Wan recollected to Luke: “for over a thousand generations, the Jedi Knights were the guardians of peace and justice in the Old Republic.” But then he adds: “Before the dark times, before the Empire.” These are the “dark times” before the film blatantly called “A New Hope”. The distinct absence of Jedi in this film is a powerful statement that stands to enrich the gravity of everything The Rebellion is fighting for in Episodes IV-VI. As director Gareth Edwards powerfully put it during last year’s Star Wars Celebration, “God is not coming to save us. –Cap Blackard

The universe of Star Wars is special because it’s so rich in character – from the lowliest cantina creature to one-line Imperial Officers. As countless novels, comics, games, and other transmedia Star Wars spin-offs have shown over the decades: known heroes or namesakes aren’t needed to tell amazing stories. The lineage of alleged immaculate conception wunderkind, Anakin Skywalker, need not apply. The numbered Star Wars saga is the story of the Skywalkers, we get that, but it’s refreshing to step away from that space opera for and try something new. That said, if what our Star Wars speculation podcast State of the Empire reports is true then we’ll be seeing Darth Vader in this film. After all, he did say, “there’ll be no one to stop us this time.” In our defense, if we called him a Skywalker he’d Force-choke us. –Cap Blackard

We know the Galactic Empire has a menacing grasp all across the galaxy. Characters have inferred just as much over the years and the preceding seven films have arduously labored over its grand design, starting with its rise in the prequels to its fall in the original trilogy to its twisted echoes in the ensuing films. The stakes for everyone involved are insane in Rogue One, though, and it looks like we’re going to have a front row seat to their reign of chaos. Remember what happened to Uncle Owen and Aunt Beru in A New Hope? That brand of tyranny happened off-screen! If Edwards really does stay true to his vision, we’re going to finally understand the power of the dark side, and it’s going to hurt pretty, pretty … pretty bad. –Michael Roffman

All the aforementioned Star Wars media outside of film proved a valuable point: Star Wars is bigger than any one person. It’s bigger than George Lucas. It’s bigger than the legacy of the Skywalkers. For the fans who explored the universe beyond the original six films, they fell in love with a wealth of new characters and boldly different tales set in time periods all across the series’ continuity. It’s thrilling that these kinds of stories are no longer off-limits to films.

With Rogue One, we’re able to return to the era of the original trilogy without pandering. It’s a story-first approach to franchise building that allows fans and creators alike to spend more time in an era they love without harping on cheesy callbacks, while paying homage to what came before. Case in point: though the former “Expanded Universe” slate was wiped clean at the start of the Disney era, Rogue One already features many subtle nods to the original theft of the Death Star plans in the beloved Dark Forces game series. What a time to be alive. –Cap Blackard