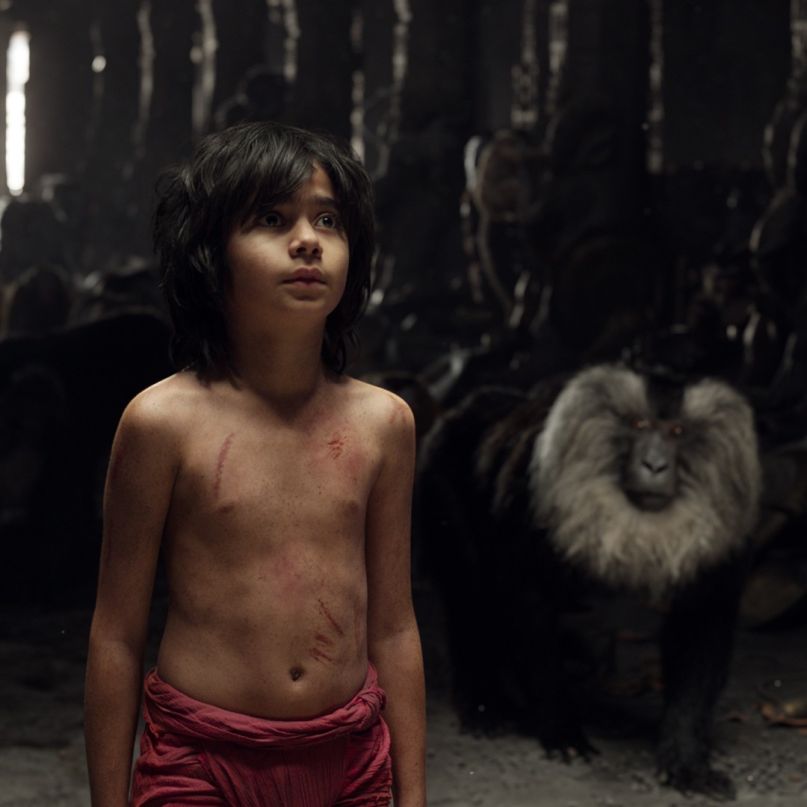 The very first image of The Jungle Book sees the traditional film-opening Disney castle receding back into the distance, rapidly, as the shot disappears deeper and deeper into the jungle and the trees obscure it from view. Even if it’s just a showy way to introduce a studio logo, it sets a tone from the first few moments, one suggesting that this Disney version of the animal kingdom exists in the same world of magic as any story of royalty and evil colliding. And given the majesty that Jon Favreau manages in The Jungle Book, it’s a perfect introduction to a vivid world.

The Jungle Book is a reimagining of the 1967 Disney film, rather than the Rudyard Kipling story from which so many other adaptations have emerged. The central story is the same, but for the still-uninitiated: Mowgli (newcomer Neel Sethi) was recovered at a young age by Bagheera (Ben Kingsley, all over the film as the narrator), a panther who delivered the infant Mowgli to a pack of wolves led by Akela (Giancarlo Esposito). Akela’s partner Raksha (Lupita Nyong’o) raised Mowgli as one of her own, but as the boy begins to grow, fear spreads that the “man cub” will inevitably outgrow the second part of that description, and become man. And man kills animals. Lurking in the darkest corners of their generally peaceful world is Shere Khan (Idris Elba, perfect), a Bengal tiger who exists as every animal’s worst fears made manifest.

(Read: Why Disney Will Always Be King of The Jungle Book)

When the general peace of the jungle is broken by an act of violence on Shere Khan’s part (a scene delivered with bracing, out-of-nowhere immediacy), Mowgli is forced out of the only family he’s ever known, as Bagheera escorts him back to the land of men with Shere Khan near behind. Of course, nothing goes according to plan, and Mowgli learns the realities of the jungle and the larger world by way of a parade of interesting, often nefarious creatures. Favreau, working from a tight screenplay by Justin Marks, wisely spends little time on preamble or allusive reference; because the director can depend on a general understanding of a classic, frequently told story, he’s set free to focus on the film’s grander pleasures, both visual and thematic.

To that first point: The Jungle Book features some of the more astounding visuals in recent film. For a film that’s overwhelmingly digital, there’s a remarkably tactile quality to so many of the film’s setpieces. It manifests in small and large ways, the fog hanging heavy over a thicket of trees in which Mowgli finds a gigantic, repulsive snakeskin, or the dilapidated opulence of the monkey castle atop a mountain, or the dark silhouettes of men in their own territory outlined by a brilliant, immense fire. It’s a marvel of filmmaking created from nothing (and one of the more meaningful uses of 3D in recent memory as well), and Favreau stages one scenic tableau after the next with uncommon skill. That’s to say nothing of the various animals, animated so well that the innate absurdity of realistic anthropomorphic animals is kept to a minimum. From the fur to the movements, the film dances around the uncanny without ever distracting, and the realism of its ecosystem only adds to the overall physicality onscreen.

If Jungle Book’s a film very much in keeping with the current tendency to work as many action sequences into the proceedings as possible to show off those digital achievements, Favreau finds a series of increasingly clever ways to answer the call. One of the primary benefits of a digital-heavy approach is the ability to put the “camera” places it could never otherwise go. In the film’s vertigo-inducing opening sequence, Mowgli jumps and swings from one branch to the next and is followed intimately all the while. When Mowgli is placed under the spell of the great deceiver Kaa (Scarlett Johansson), Favreau follows him up a kind of spiral of trees, around which the snake is continually wrapping itself all the while. An early attack by Shere Khan surrounds Mowgli on all sides by the tall grasses of a savannah; the low framing situates the viewer as prey. With Mowgli as its central focus, Favreau envisions this world as one from a child’s point of view, one far out of his depth.

(Read: Ranking Every Disney Song From Worst to Best)

A story so focused on that child doesn’t work if the child doesn’t. Luckily, Sethi is a spot-on Mowgli, equally full of wonder, terror, and the kind of naïve, forcible bravery that gets any young kid into all kinds of trouble. It’s an assured, defiant performance, one admirably lacking in the kind of precociousness that tends to characterize so many child-star turns. As the physical soul of a nonexistent world, Sethi anchors even the most outlandish sequences in the primal dread of feeling alone and confused in the world, as those nearby aim to exploit that innocence. He’s never been farther from home, and Sethi ably captures just how frightening that can be.

And The Jungle Book gives Mowgli quite a bit to fear. Even by Disney’s standards, this is dark stuff; with the tangibility of the world comes a genuine sense of danger that films aimed squarely at children have so often avoided in recent times. Mowgli loses people, he almost dies several times, and he learns the hard way that there is good in the world, but there is also absolute evil. (Shere Khan, in particular, is a scarred terror, the bass in Elba’s voice exuding pure menace.) With the much bigger budget comes a grander sense of danger, from a climactic showdown in a forest being overtaken by “man’s red flower” to the siege on King Louie’s compound, which Favreau imagines as similar to some of the more chaotic moments of Peter Jackson’s King Kong. (It’s the only time the film really falls into the “bigger and louder and more destructive is better” trap of the current mainstream, but it’s effective enough.) Like some of the best Disney films, this is a world that can and will kill Mowgli if he doesn’t wise up, and like those, the film is better and more honest for it.

And yet, crucially, the film’s moments of levity act as a welcome counterpoint to the majesty with which so much of the film carries itself. The Jungle Book is a parable about maturity and about finding the good in the world, and it finds an endless fount of it in Bill Murray’s Baloo. Given that the pop iconography surrounding Murray tends to imagine him as a real-life (if drunker) Baloo, it’s a perfect bit of voice casting, with Murray lending the affable slacker his signature seen-it-all delivery. It’s a warmer and less sardonic turn than much of Murray’s recent work, and one of the film’s standout moments reprises “The Bare Necessities” with Mowgli floating down a river on Baloo’s stomach. It’s wonderfully serene, a moment in which there’s nowhere to be and nothing to do and the film allows that to be just fine.

Most of the music is gone from this iteration of the story, but that classic has its moment, as does “I Wanna Be Like You” later on, delivered by Christopher Walken’s King Louie, who appears in brief as an oversized monolith to talk exactly like Christopher Walken. Some will find this distracting, others delightful; this review falls emphatically into the latter category. The musical flourishes help to situate The Jungle Book in a curious space, one unusually realistic and yet appreciably surreal. In this way it’s pure Disney, at once a flight of fancy and applicable to the struggles of everyday existence. Although the film ultimately lands somewhere very different from its most immediate predecessor, it’s in a more honest, relevant place, making the argument that family is relative and defined wholly by where you belong. After all, belonging is one of the barest necessities of life.