Kevin Costner gets Ryan Reynolds’ brain, but this limp thriller needs one of its own 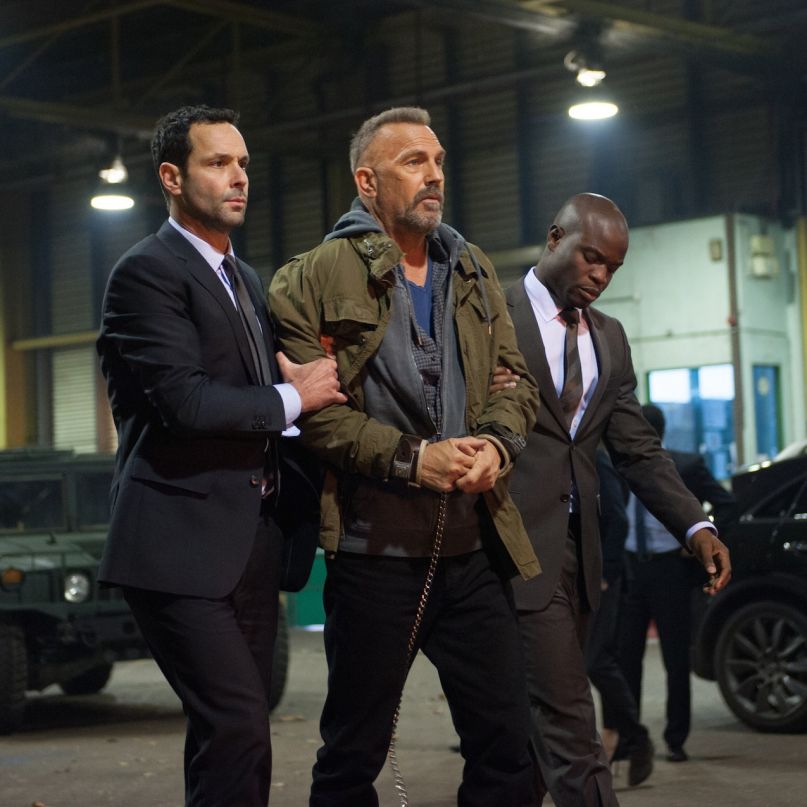 Now that Liam Neeson has successfully carved out a niche as a middle-aged badass in trashy Eurothrillers, Kevin Costner’s been trying to jump on the action-film comeback bandwagon for a few years. Not to be deterred with limp comebacks like 2014’s 3 Days to Kill, his latest attempt courtesy of Israeli director Ariel Vromen, Criminal, gives Costner the kind of transgressively fun action-hero role he’s been dying to play, but at the expense of a story that’s somehowat once by-the-numbers and infinitely confusing.

The titular criminal of Criminal, Jericho Stewart (Costner), is a beardy sociopath who just so happens to have the right kind of brain injury to support an experimental brain-switching experiment run by bookish scientist Dr. Franks (Tommy Lee Jones) that allows the CIA to implant the memories of brain-dead superspy Bill Pope (Ryan Reynolds) into Jericho’s brain. You see, Pope died right in the middle of an important mission involving something called the Wormhole that allows Michael Pitt’s Jan Stroop (who “goes by the cyber-name Dutchman”) to activate any missile in the world, and his boss Quaker Wells (Gary Oldman) wants to know where Pope stashed the Dutchman by putting the memories in Jericho and asking him. However, Jericho decides to escape the facility instead and deal with Pope’s implanted memories and emotions himself.

Follow any of that? Good, because that’s about as succinct an explanation for the plot of Criminal as you’ll get anywhere else. Its convoluted plot and over-the-top characters feel straight out of the ‘90s, like a Tom Clancy cyber-thriller (complete with Oldman shouting lines like “The Wormhole is in the deep web!”). Here, you’ll be treated to nondescript European baddies like Hagbarkada Heimdahl (Jordi Molla, made for this kind of role), unscrupulous government agencies willing to throw away the lives of loose-cannon assets, and a magical techno-Macguffin that causes untold mayhem at the push of a button.

Really, though, all of this is just the loose framework for a Kevin Costner action-hero showcase – the kind where he gets to run around like Liam Neeson and shoot at European henchmen with total abandon. Vromen’s previous film The Iceman proved that he takes a certain perverse delight in displaying the unrepentant actions of bad people, and he at least approaches Jericho’s particular brand of sociopathy with the sense of humor that’s made Neeson’s tough-guy action persona entertaining. To his credit, Costner takes the inherent silliness of Jericho and his particular situation and runs with it, delivering an enjoyably wry performance that helps sail you through the more nonsensical elements of the story.

Despite the entertainment value of Costner growling insults at people, Criminal does have a tone issue, which manifests in the film’s later action scenes. In many ways, Jericho is a much more cartoonish anti-hero than Taken’s Bryan Mills, given the glee with which Vromen shows him beating up English bystanders to steal their truck, or bashing a henchwoman’s head in with a heavy object. There’s certainly a level of perverse fun to Jericho punching anyone who so much as looks at him funny, and swearing at pharmacists as he struggles to open child-proof medicine bottles. However, after our hero’s millionth brutal assault and/or home invasion, Jericho’s gruff badassery crosses the line into sheer sadism, which leaves you with a bad taste in your mouth by the film’s messy final act. By the time Jericho decides to save the girl and the world, his newfound morality clashes awkwardly with the film’s dedication to blowing stuff up real good, making him a principled hero who still gets to steal ambulances and crash cop cars into each other.

Making matters worse is the forced, unconvincing, and downright disturbing subplot involving Pope’s wife (Gal Gadot), to whom the decades-older Jericho forms an attachment due to acquiring Pope’s memories and personality. It’s creepy enough to have a film where Pa Kent and Wonder Woman are love interests, but it’s further compounded by groan-worthy attempts to humanize Jericho through cutesy interactions with Gadot’s daughter, replete with all the toy-playing bonding scenes we’ve all seen a million times before. And poor Gadot is wasted here, spending most of the movie worrying by the phone and believing a home-invading stranger far too easily.

Don’t get me wrong: I think Kevin Costner is the bee’s knees, and Criminal works hard to fit into the tradition of goofy sci-fi-tinged action thrillers like Lucy and Face/Off. Still, the messy plot and jagged pacing pisses away most of the goodwill from Costner’s sincerely crazy performance. We believe in you, Kevin, but maybe stick to Westerns for your late-career comeback.