Courtney Taylor-Taylor and co. aren't doing anything new, to their benefit and detriment 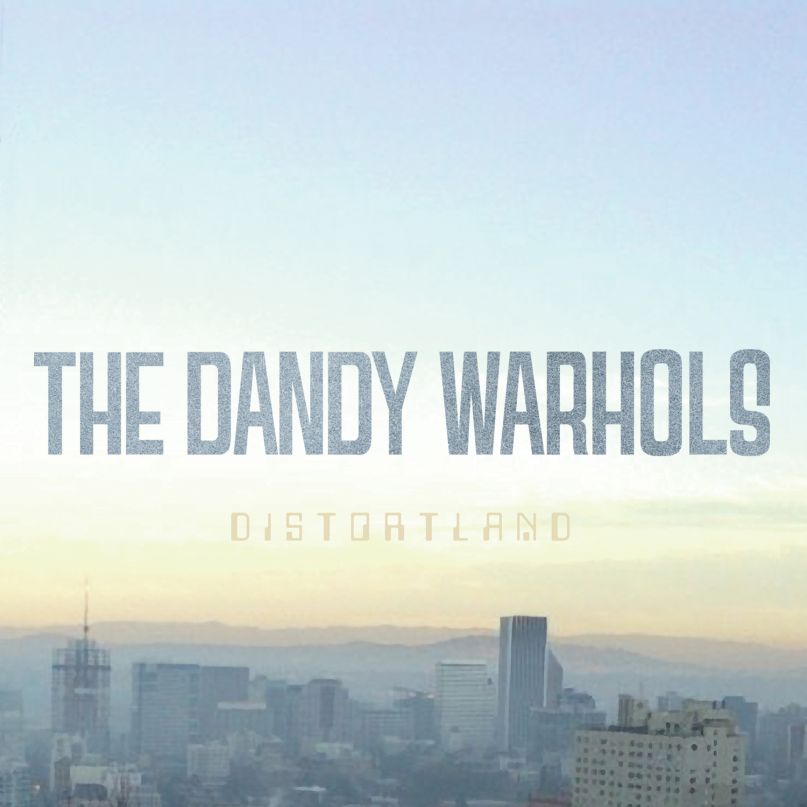 The last line on the new Dandy Warhols LP, Distortland, finds singer Courtney Taylor-Taylor’s voice, just above a whisper, singing, “I’m too old for this shit.” Even for the Dandy Warhols, notorious dispensers of irony, the last lyric of “The Grow Up Song”, which borrows Danny Glover’s repeated Lethal Weapon line, is a bit much. It is, after all, the Dandy Warhols’ eighth studio album, and their fourth in the last eight years. While most casual listeners last checked in with the Dandys on their last real hit, 2003’s “We Used to Be Friends”, the band has methodically continued to write and release music. They are, quite literally, not too old for this shit.

If Courtney Taylor-Taylor feels the creeping anxiety of middle age — he is 48 — there’s no hint of it on Distortland until the “The Grow Up Song”. If anything, the Dandy Warhols are having something of an unnoticed renaissance, despite Taylor-Taylor’s worries that all his friends are becoming “mommies” and “daddies.” To use another tired movie cliché, Taylor-Taylor and his band might be ready for one last ride/job/whatever.

Though Dandy Warhols’ moment passed in the late-’90s or early 2000s, their wry songs about modern life still resonate. Consider “Bohemian Like You”, arguably the band’s biggest hit due to its inclusion in major television advertising. It’s a stinging indictment of bougie hipster culture. Listening to it in 2016, “Bohemian Like You” doesn’t just hold up, it iterates for a moment a decade and a half later, a rebuke of all the bespoke bullshit, the small batch bourbons, the stupid brunch, and the picture you took of it.

The album from which “Bohemian Like You” emerged, the sad, beautiful, and capacious Thirteen Tales of Modern Bohemia also has a lot to say about our current moment, which leads to the paradox of Distortland. Nothing has changed musically for the Dandy Warhols or the bizarre brand of upper-middle class privilege that they went after.

Pop hooks abound on Distortland, whether on the cool, whispered groove of “STYGGO” or on the crunchy, alternative radio bound “You Are Killing Me”. Taylor-Taylor knows well how to resolve a chord progression in the pleasing manner of an exhale. Taylor-Taylor so often retreats into irony to discuss the ways in which he too was coopted by the bourgeois or hipster fantasy he wrote against. And halfway through Distortland, you might wonder what could be more bougie than making money from your art.

On “STYGGO”, Taylor-Taylor sings “Crimson and clover are taking on over,” a reference to the Tommy James and the Shondells’ smash. Pop never lies far from Taylor-Taylor’s purview, even when he’s mocking the osmosis of pop melody. He is and isn’t kidding when he sings, “Heaven is a place on earth” — a Belinda Carlisle wink — on the aptly titled “Catcher in the Rye”. Taylor-Taylor sees himself and his band as a group of Holden Caulfields, calling the whole world phonies — except Taylor-Taylor never exempts himself from the judgment. He’s as much of a joke as the rest of us.

There are some duds here. The breathless and gauzy “Search Party” opens Distortland with circular logic: It sounds exactly like the Dandy Warhols sound without offering much new, and “All the Girls In London” is a clattering mess. Irony can’t fix everything. “The Grow Up Song” arrives last, sounding like nothing else on Distortland. Taylor-Taylor always confronts a warped landscape — it’s even in the album’s title. The Dandy Warhols aren’t doing anything new on Distortland, and they still sound as dispensable and indispensable as ever.

Essential Tracks: “STYGGO”, “You Are Killing Me”