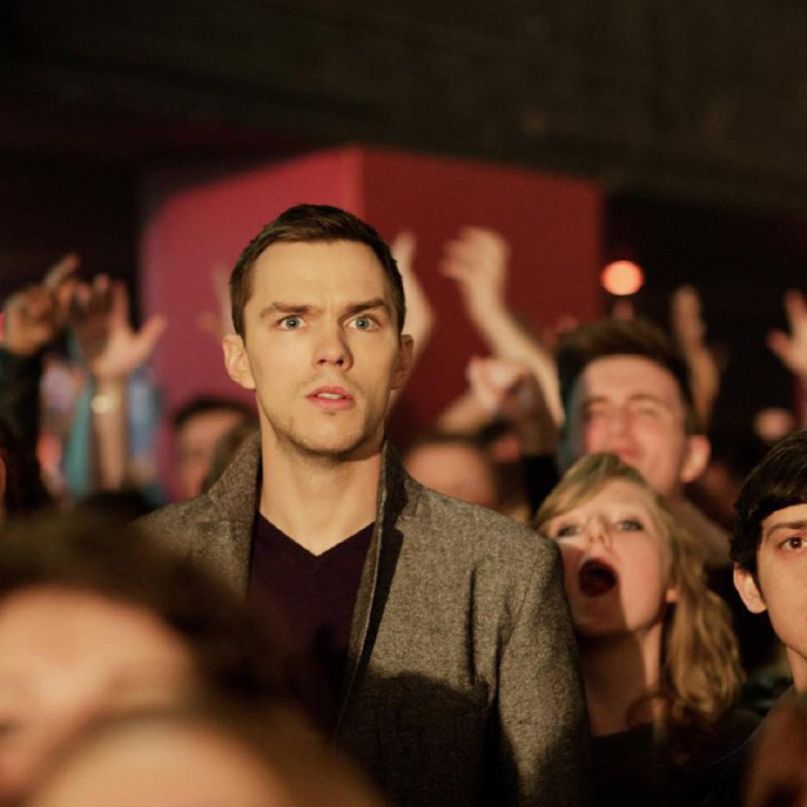 Following a brief sneering and searing monologue by its protagonist, Stelfox (Nicholas Hoult), Kill Your Friends kicks off with a Menswe@r joke. After waxing snidely on the seediness and the ruthlessness of the music industry, the A&R manager finds their debut album in his colleague/rival/ostensible friend Waters’ (James Corden) CD collection and condescendingly asks why the fuck he’d still have it. Waters’ response is even more damning: He almost signed them.

As far as reference points for a film set in 1997, in the heady, pre-Internet download days of the British music industry, you can’t get much better than that. Menswe@r, a footnote in the UK’s music history to put it charitably, were briefly hailed as the next big thing in Britpop in the mid-90’s. They found themselves in the middle of a bidding war and signed to London Records after only a handful of gigs. Then they rode that wave of hype so unique to the UK music scene all the way to the middle. While their music was passingly charming, it wasn’t anything the rock and pop world hadn’t heard before and failed to set either side of the pond on fire. Their biggest domestic showing was a top 10 single. Their only mark on the North American market was a somewhat guilty pleasure called “Daydreamer”.

The joke is a pitch perfect way to kick off an almost pitch perfect period piece. Kill Your Friends does an admirable job of recreating the era, from the music (in addition to a score by Junkie XL, the soundtrack features Blur, Oasis, The Prodigy, and a Sneaker Pimps cover) to the drugs of choice, to the Spice Girls-influenced fashion, to the irony and cynicism. Hell, even Hoult’s sallow cheekbones and perversely sexy presence seem to recall everything that made Jonathan Rhys Meyers so intoxicatingly/confusingly hot at the time. The only problem is that the plot feels equally retro.

Based on the cult 2008 novel of the same name by Scottish author John Niven (who also wrote the script), Kill Your Friends follows Selfox, a scheming 27-year-old A&R manager whose only interests are money, cocaine, quoting Conan The Barbarian, and climbing his way to the top of the record label he works for. When his ascendance is threatened, he turns to any and all nefarious means necessary, no matter who he has to bribe, frame, or murder to get there.

It’s all very darkly fun, but it’s also surprisingly nostalgic. In 2015, the naughty A&R man and the Patrick Bateman-esque bad guy both feel dated, and Stelfox and his antics feel every bit as ‘90s as the music and the fashion. The film might be a gleefully naughty romp soaked in bright colors and high cheekbones and a well-curated and deliciously well-timed soundtrack (The Prodigy’s “Smack My Bitch Up” has never looked or sounded better) and its pivotal murder scene might even do for Paul Weller what American Psycho did for Genesis and Phil Collins, but it’s nothing we haven’t seen before.

Even its individual elements recall other films and TV shows which executed similar feats both earlier and better. Stelfox’s campy fourth wall-breaking and Machiavellian scheming have a surprising amount in common with the original BBC House of Cards series. The film’s brief detour into skewering DJ culture feels like a less fun It’s All Gone, Pete Tong. And the debt that the story and characters owe to American Psycho and the early works of Irvine Welsh are obvious.

That said, Kill Your Friends is effective and enjoyable in the way that dusty music compilations are. Even if the individual elements might best be enjoyed in the original context, there’s a thrill in collecting the best that a decade had to offer in one place, and this film has all of the hallmarks of what made Britpop culture so enjoyable. I’ll probably watch it again. But then I still know all of the words to “Daydreamer”.