There's nothing depressing about the iconic frontman's Bowie-inspired showcase 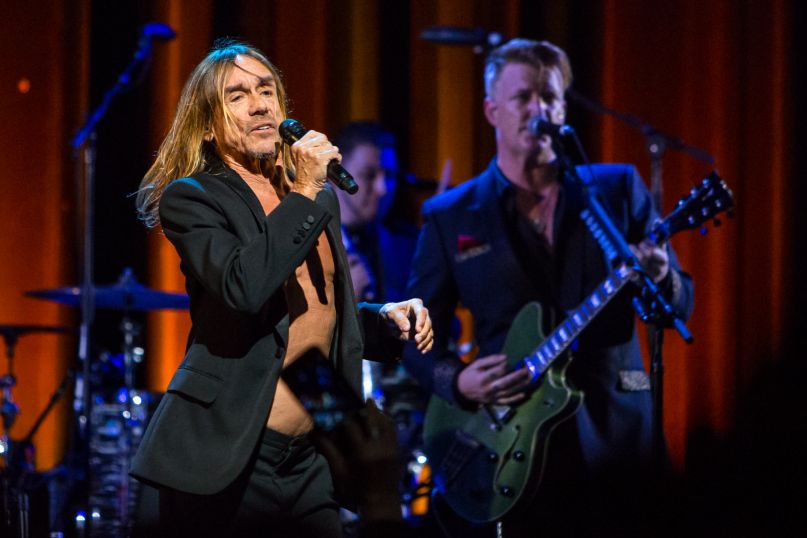 In another artist’s hands, the storyline of Iggy Pop in 2016 could be gut-wrenching. Following the death of his longtime friend and collaborator, the counterculture legend releases what could be his last album, confronting his own mortality head on. He enlists a cast of contemporary rock and roll’s brightest stars, a passing of the torch and a last shot to tap into the vitality that often fades with age. Hell, the album is even called Post Pop Depression.

But the truth is Iggy Pop in 2016 is only as depressing as the audience makes it. Nothing about his live show, which dipped into ACL Live for the second night on Wednesday, is presented as less than a celebration. Maybe that’s what Bowie would want from a setlist built upon the pair’s two collaborative 1977 classics, The Idiot and Lust for Life. When Pop opens his show with the latter’s title track, its message can’t be ignored. Pop is an artist more intent on reveling in life than mourning its eventual end. Later, introducing one of his new songs, “Valhalla”, Pop asked not just whether heaven was real, but whether it was even a place he wanted to go. He laughed off the sentiment, every look behind the curtain shrugged off in favor of living in the moment.

Onstage, Pop’s presence embodies vitality. Whether it’s wearing a charcoal blazer to match his bandmates, which include Queens of the Stone Age’s Josh Homme, Dean Fertita, and Troy Van Leeuwen, Arctic Monkeys’ Matt Helders, and Chavez’s Matt Sweeney, or discarding that blazer in favor of his quintessential shirtless self, Pop is still every bit the madman live. He makes no mystery about his love for being on the stage, thanking the audience profusely throughout the set, even asking the entire crowd to “come up here and fuck me.” When he’d ask for the house lights to shine down on his fans, it was in the interest of remembering, of savoring his own survival, of letting the moment linger.

Younger artists might take a selfie. Iggy Pop basks in the glory of music. And there’s nothing depressing about that.