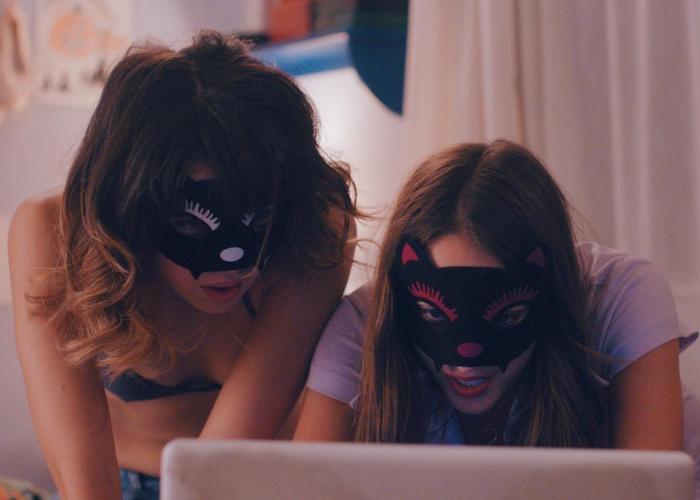 In the pre-credits sequence of Teenage Cocktail, protagonists Annie (Nichole Bloom) and Jules (Fabianne Therese) are sitting in their car when they get rammed by a pickup truck. The driver, Frank (Pat Healy), stumbles out of the vehicle in a daze, then walks toward the two injured girls with a threatening look on his face.

The film then flashes back several months earlier, and for a long time, we forget about the cold open — the automotive violence a distant memory (or prediction) underneath the dreamy haze of teenagers trying to figure out their paths in life. For the confident Jules, that means heading to New York City and pursuing ballet. For the more awkward and directionless Annie, that means going wherever her best friend does.

As the two become closer as pals and giddily hesitant lovers, first-time director John Carchietta explores their relationship with little judgement. The girls partake in drugs, theft, and — in the film’s central plot device — webcam modeling for extra income, but he frames it as nothing more than coming-of-age: innocent when they awkwardly chat about the future, titillating when they kiss for the first time (sound designer David Becker amplifies the lip-smacks in a way that’s somehow sweet and not creepy), and tragic when two male classmates reveal their online photos to the rest of their high-school.

At a certain point, Carchietta — who also wrote and edited the film — takes the dangers of webcamming far beyond the girls just getting humiliated by their peers. Still in need of more cash so they can ditch their small town and finally move to NYC, they accept the middle-aged Frank’s proposal to meet up in person. It’s here that Teenage Cocktail moves from teen drama to sleazy crime flick — more midnight genre film than earnest exploration of sexuality.

Although the brutality and manipulation are never played for laughs — Healy manages to find a pathetic kind of sympathy in Frank — it’s still an odd leap to take. Carchietta’s thesis of how hometown limitations lead to an intersection of sexual exploitation and opportunism is meaty enough without the eruption of overblown violence. Also, a fascinatingly controversial subplot involving the relationship between Annie and her father, Tom (Joshua Leonard), is left undercooked — brought up once, then never acknowledged again. One can’t help but wonder how the film’s message would be informed if the extremisms of the Frank storyline were toned down and trimmed in favor of more time with Tom and Annie’s mother, Lynn (Michelle Borth).

During the brief talkback after the screening, the moderator pointed out to Carchietta how, despite his ickiness, Frank is a somewhat sympathetic character. Carchietta didn’t seem to agree with the sentiment, stating that, at the end of the day, Frank remains a creep and deserves anything bad that could possibly happen to him in the movie. I’m not at all saying that pedophiles are decent people and shouldn’t be punished, but it’s interesting to see the director drawn to the vengeful moments of the film, when he actually ends up nailing the more subtle, painful aspects of teenhood. That’s a harder thing to pull off than a grindhouse flick, which makes Teenage Cocktail an impressive, if slightly uneven, debut.