Plus, a Q&A with bandmates Jean-Benoit Dunckel and Barði Jóhannsson 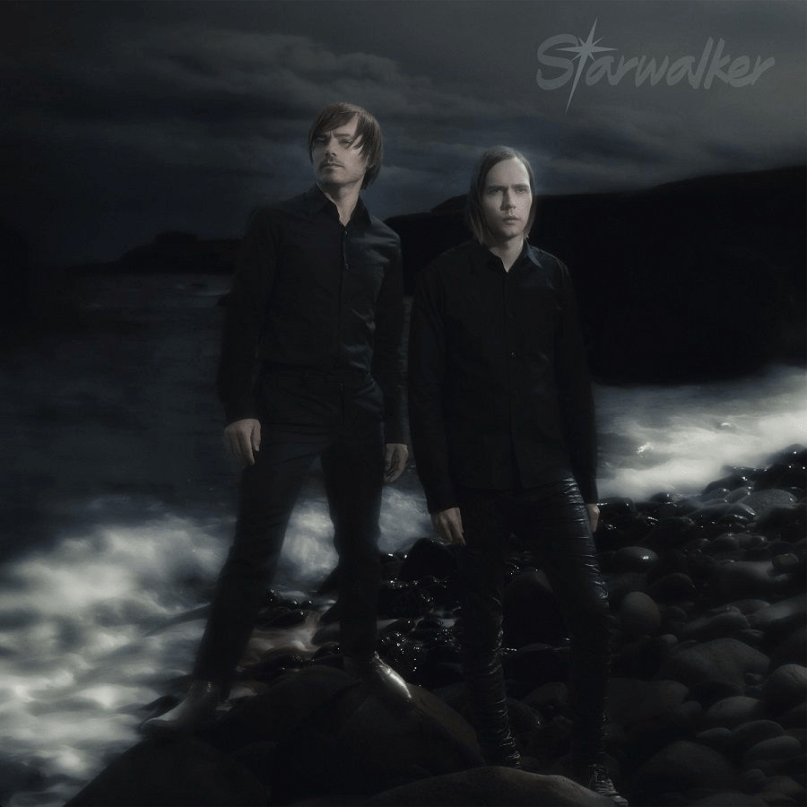 Jean-Benoit Dunckel of Air and Barði Jóhannsson of Gang Bang first came together as Starwalker for the release of their 2014 debut EP, Losers Can Win. Ever since, they’ve been shirking the label of mere “side project.” Instead, the collaboration between the French electro-pop icon and the acclaimed Icelandic composer is one that takes on a life of its own, one that’s spiritual and enchanting in its lush electronic compositions. On Friday, they’ll prove this once more with the release of their debut full-length through Prototyp Recording & Bang ehf via Sena ehf.

Starwalker the album shows just what can happen when accomplished and innovative artists like Dunckel and Jóhannsson put their wizardry together without ego for the sake of art. There’s the intergalactic lullaby of “Come and Stay”, the reassuring hook of “Everybody’s Got Their Own Way”, and the dark cinema of “Le President”. The record plays like two master painters exploring the Matrix of their own artwork, full of swirling colors and futuristic brushstrokes.

The LP officially hits retailers on Friday, April 1st, but you can stream the entire thing in advance below.

Dunckel and Jóhannsson also answered a few questions for Consequence of Sound regarding their new project together. The pair discuss bringing their humanity to their music, working together, and the melancholic dichotomy of Starwalker. Check it out below.

You both come from very different worlds, even if you float in the same artistic galaxy. How did you find each other’s work, and how did you come together as Starwalker?

Barði Jóhannsson: We first met as humans. After that, we tried to work together and – little by little – we became Starwalker.

Jean-Benoit Dunckel: We both love audio beauty so we turned to our instruments to make it happen. We come from two different galaxies, but we speak the same language, music, and we search for powerful, lovely textures.

Both of you have your own distinct projects. What would you say each of you brings to the Starwalker table, and how is working together different from those other projects?

BJ: Each of us brings himself to Starwalker. After that, ideas start to come – there is no firm definition of who does what. But, for sure, JB is a much better keyboard and piano player than I am. In my band Bang Gang I have full control, but in Starwalker we have a democracy of 50/50. It is completely different than all of my other projects in a very pleasant way.

JBD: I think organization of roles in music can’t really work because it’s all about inspiration. Also it’s good when someone unbalances the intended production of a track. It’s all about finding the breaking point of our habits to discover a new way of making a song. With Bardi, I feel we can compose extreme music and go in surprising directions.

JB, your career with Air spans decades. In terms of songwriting, how differently — or not — did you approach the Starwalkeralbum as opposed to, say, Air material?

JBD: No, I don’t know. I just try to do my best and make a good song. Air is a unique experience and I’ve come to realize after all the years that the more I make music, the less I know about. I must unlearn. I prefer prioritizing having fun while making making music than prioritizing making it successful.

There’s an interesting interplay of light/dark, melancholy/elation throughout the album, especially on early singles “Le President” and “Holidays”. What inspires these dualities and how are you able to maintain such a successful balance?

BJ: We are humans, we have many different feelings. As we are sensitive, our music tends to reflect our feelings. Sometimes you write a song reflecting how you felt two years ago, sometimes you are happy, sometimes melancholic and sometimes boys just wanna have fun.

JBD: Melancholy is really relatable to people because they feel it all the time, more frequently than fun.

Outside of Starwalker, what’s your favorite piece of material that the other has released?

BJ: One of the songs that has been on my computer’s playlist the longest is the Darkel song “At The End of the Sky”. The new Darkel songs are amazing. I think JB and Nicolas have also made tons of amazing music together with Air.

JBD: I’ve been impressed by Lady & Bird a lot – I like the orchestration. Additionally, Haxan has a unique atmosphere and Bardi created a nice character for himself.